A homestay in Trang has helped a small community thrive while keeping intact its way of life.

Bo Hin Farmstay visitors get a chance to go fishing, walk along a mangrove forest trail or plant seagrass as part of the community's conservation project.

It all began with the need to feed their families. Today, the small cluster of people in Ban Bo Hin community who run a successful homestay have become an ecotourism model for other villages.

Bo Hin Farmstay, located at Ban Bo Hin in Si Khao district, Trang province, is a community tourist attraction founded by the Ban Pru Jud Community Enterprise. It has been operating for 10 years showcasing the value of homeland and the self-sufficiency philosophy, with monthly income doubling to 40,000 baht over that period for families that jointly provide the homestay service.

In the past, people in this community depended mainly on fish cage farming and fishing. But now many of them prefer to be tour guides informing mostly urban visitors about their community lifestyle.

Bo Hin was the first community to start a homestay in Trang. Today there are eight homestays in eight different communities in the province, and more than 100 in the South, reflecting the growing ecotourism trend in this part of Thailand.

The farmstay won the Kinnaree ecotourism award from the Tourism Authority of Thailand in 2015, confirming its community enterprise credentials. It is headed by Banjong Naruepornmethee, who is also president of the Trang Tourism and Hotels Association.

Mr Banjong and his group worked for two years to educate the community on the potential of ecotourism and the purpose of his homestay.

He acknowledges fish cage farming has many problems. The monthly income of 20,000 baht is insufficient to raise a family. 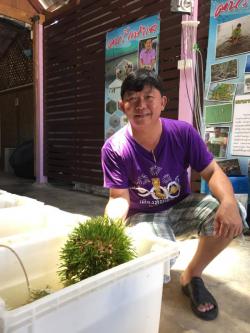 Mr Banjong and his group taught the community the potential of ecotourism.

"I decided to open this homestay because I noticed when my friends visited me they were interested in our livelihood and liked our fresh and delicious seafood," says Mr Banjong.

When the Bo Hin Farmstay opened, the initial visitors were friends. Then word of mouth started to spread to others.

He worked to make the homestay more professional to accommodate more guests with some advice from tourism-related organisations. Mr Banjong set up a Facebook page and started public relations activities to promote the farmstay.

"After we were established, other communities paid us a visit to get some ideas to run their own homestays. Some have been successful and some failed," he says.

Mr Banjong says many communities in the North have started homestays, but their residents only wear traditional costumes to welcome visitors and do not have interesting culture to display.

The Ban Bo Hin community still continues with traditional jobs fishing and raising fish in cages, with the homestay just an additional activity.

"We want to survive using self-sufficiency. We will preserve our conventional lifestyle and do not want commercial growth," he says.

Tourists must make advance reservations because the Bo Hin Farmstay can only accommodate 700 visitors per month. The price for room, board and activities is 650 baht per head for two days, one night.

Activities include learning the fisherman's lifestyle by going out in a boat to catch crab, fish and shrimp. Tourists can also walk along a mangrove forest trail, take a canal cruise, kayak in Ao Bun Kong bay and scuba dive near small local islands. The most spectacular attraction is the hot salt springs with a temperature of 45 degrees.

The key to success is community cooperation because they buy into the concept of ecotourism, says Mr Banjong.

"We're proud we could improve the lives of locals, earning them more money for their children's education and to preserve the community's traditional way of life for the next generation," he says.