A tourist enjoys a jet ski ride in Pattaya, but history has shown that the fun often turns to extortion once the watercraft is returned to shore in Pattaya. (Photo by Bob James)

The Indian embassy in Bangkok is warning its nationals to beware renting jet skis in Pattaya and other beach resorts due to continuing extortion scams and threats of violence.

In an advisory issued this week, the embassy said it has received recurring complaints by Indian tourists of being "duped by unscrupulous elements" involving jet ski rentals "particularly in Pattaya."

The scams - which have been going on for years despite repeated promises by Chon Buri province and Bang Lamung district officials to end them - begin when a tourist returns a rented jet ski only to be told it was damaged. The vendor then demands tens of thousands - or even hundreds of thousands - of baht for supposed repairs.

In many cases, the victims are intimidated into settling on the spot, rather than going to police. 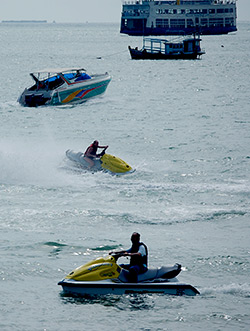 Indian tourists have been warned by their embassy to beware renting jet skis in Pattaya. (Photo by Bob James)

"Tourists also claim to be threatened with harm to their self and family members, their passports withheld if they don't pay large sums of money," the Indian advisory stated.

Embassy officials said they have brought the matter to the attention of "competent authorities" but still advised its nationals "to exercise due caution  ... while hiring, if they have to, jet skis."

The public advisory was issued after the Indian government wrote a letter to the Thai Ministry of Foreign Affairs last month about the continuing scams, which in recent years have perpetrated mostly against non-Western tourists.

The embassy noted that "Indian-looking people" had been seen assisting the scammers.

The letter prompted an emergency meeting in Pattaya in mid-August where the head of the city's powerful Pattaya Business & Tourism Association warned that the city faced a boycott from Indian travellers if the jet ski problem was not brought under control.

Local Pattaya media reported that Pol. Maj. Piyapong Ensarn, head of the Tourist Police Division in the city, said jet ski scams have risen sharply this low season, with two complaints in February, one in March, two each in April and May then eight in June and nine in July.

Later last month, PBTA president Sinchai Wattanasartsathorn proposed that all jet skis simply be banned if they cannot be controlled.

A number of the Pattaya's jet ski operators were called to a meeting Sept 3 and urged to rein in bad elements in their midst, but no new regulations or restrictions were offered by city officials. Many of those assembled protested their innocence and expressed outrage at the suggestion of a complete ban.

For years Pattaya has tried to tackle its jet ski problem, which has been chronicled repeatedly in the press and social media and linked to organized--crime gangs that pay off local officials and police to continue operating.

At the emergency meeting in August, Pol. Maj. Piyapong was reported in local media saying that his office received numerous complaints from scam victims that first went to the Pattaya police station only to be ignored. The same press reports also showed that, as far back as 2011, Pattaya mayor Itthiphol Kunpleum said Pattaya's police were part of the jet ski problem, with corrupt officers assisting scammers in extorting money from tourists and earning some of the profits.

A number of committees have been set up over the past several years, but no serious attempt to curb the problem has been made since February 2013 when the city said it would force jet ski operators to carry insurance cover to cover any damage. Like all regulatory efforts before and since, that initiative was never implemented.

Local media reported this month that Pattaya City Hall is now debating having crime-suppression officers perform weekly inspections and have specialists or engineers inspect the jet ski before settling on damages.