Thai Airways International (THAI) remains confident it can return to profit next year as scheduled in its business rehabilitation plan despite not being able to cut costs as much as expected.

"Our string of annual losses should end in 2015 if there are no other negative factors thanks to the dip in oil prices coupled with higher passenger numbers," president Charamporn Jotikasthira said.

The plan is to cut operation costs by 20% on average through staff reductions, shedding unused fleet and improving sales and marketing strategy. 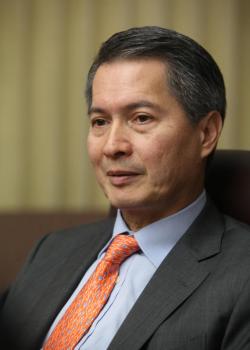 Mr Charamporn believes THAI can achieve at least 60% of the rehab plan next year and complete it in 2017.

"This means we should see improvement of all critical functions towards long-run profitability in 2017," Mr Charamporn said.

THAI posted a first-half net loss of 8.21 billion baht, an improvement over the 11 billion loss in the same period last year.

The first quarter saw a net profit of 4.54 billion baht, but the second quarter included a one-time special expense for the early retirement of 1,401 employees, 3.67 billion baht in foreign exchange losses and a 426-million-baht loss on impairment of assets and aeroplanes.

"The first half was a good sign, as our operating loss was only 297 million baht compared with a much bigger loss last year," he said.

Good signs include a 20% increase in passenger numbers and declining oil prices, although fierce competition and resulting price wars are a headwind, he said.

This year the company has sold unused assets such as aircraft, adjusted flights by axing routes with low demand and retired 14 of 18 ageing aeroplanes that could not make the operating margin. It plans to stop operations for two more ageing aeroplanes in December, with the final two slated for next February.

"This will cut our operating expenses next year," Mr Charamporn added.