The government's new tax incentive for foreign big-budget films shot in Thailand is expected to boost revenue from these shoots substantially. 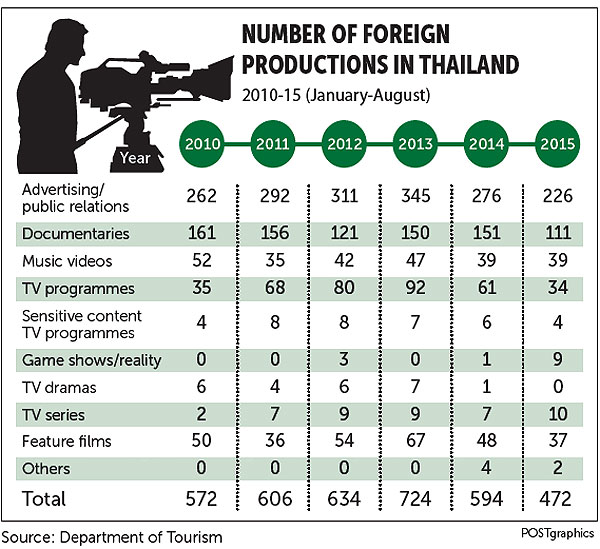 The Tourism Department estimates the incentive will drive revenue from Thailand being used as a location for feature films, documentaries and reality shows to 5 billion baht in 2018, up from an average of 2 billion a year now.

The cabinet last month approved a Tourism and Sports Ministry proposal to offer a cash rebate for foreign big-budget film shoots in Thailand.

A tax rebate equal to 15% of every 30 million baht spent on the shoot locally will be offered on top of another 5% cash rebate for film-makers using local post-production services.

The Budget Bureau agreed the total cash rebate should not exceed 200 million baht a year per film-maker, said Wanasiri Morakul, deputy director-general and acting director-general of the Tourism Department.

She said Thailand had become a popular filming location for foreign productions, with many movies featuring beautiful attractions such as beaches and the rich local culture.

Maya Beach on Koh Phi Phi Leh in the Andaman Sea was a location for The Beach (2000), while the Chinese comedy Lost in Thailand (2012) has turned Chiang Mai province into a popular destination for Chinese tourists wanting to see the locations that featured in the film.

Ms Wanasiri said the new tax incentive would also reduce tax evasion, as production teams must submit legal receipts and other documents when applying for the tax rebate.

The Foreign Film Production Services Association (Thailand) has been instructed to set benchmark costs for filming such as film equipment rentals and post-production expenses, as the wide variation in such costs for different operators has put off some film-makers.

She said the department expected to be set up for the incentive in fiscal 2017, with the first payments available in fiscal 2018.

Locations featured in successful films will also be promoted as tourism sites such as Koh Khao Phing Kan and Koh Tapu, both of which have been called "James Bond Island" after they were featured in The Man with the Golden Gun in 1974.

In the first eight months of this year, revenue was 2.04 billion baht from 472 films, while the full-year figure is pegged at 2.5 billion.

Call for a careful tourist reopening