Thai companies have scored some notable successes abroad, but the benefits of outward foreign investment on the domestic economy are roundly debated.

Large Thai corporations, in particular, have been tapping the competitive advantages of other countries to secure lower-cost resources and labour as well as gain access to new markets abroad.

"It is very much a change in the Thai economic structure that started mainly as a recipient of foreign direct investment," said Pavida Pananond, an associate professor of international business with Thammasat Business School at Thammasat University.

"Also, Thailand is starting to become a regional and important player in OFDI. So it's not wrong to say that OFDI has now become a new feature of the Thai economy."

Overseas investment by Thai businesses was modest in the late 1990s and started to pick up after 2005. Outward FDI exceeded inward FDI for the first time in 2010, reflecting some major acquisitions abroad by Thai corporations, and recorded its highest growth in 2012, according to data from the UN Conference on Trade and Development (Unctad) cited in research sponsored by the Thailand Research Fund.

The Bank of Thailand said the sharp acceleration of OFDI in 2012 reflected moves by Thai businesses to lay the groundwork for greater regional trade flows once the Asean Economic Community takes effect at the end of this year.

Ms Pavida, a co-author of the research, notes that so far, most of the overseas investment has been by large listed companies.

"This is one fact that I think we should take into account when the government tries to look at promoting small and medium-sized enterprises. We should not ignore the fact that most of the OFDI has been done by large companies," she said.

Based on SET data from 2000-12, companies in resources and technology were the most active OFDI players. Thai agribusiness multinationals, most notably Charoen Pokphand Foods (CPF) and Thai Union Frozen Products (TUF), are well established in many global markets. In sectors such as consumer products, property and construction, however, the SET data show a decline in OFDI.

For some companies that have invested abroad, the number of foreign subsidiaries and the investment value of these companies have risen significantly over the years. CPF and its parent CP Group, for instance, have a huge presence in China, along with Europe and good coverage in Asean. TUF has acquired major European and North American seafood brands. The coal miner Banpu Plc now earns most of its revenue from Indonesia and Australia, with other operations in China and Mongolia.

In the food industry, most investments abroad have focused on downstream activities, meaning that Thai companies are using international expansion to extend their marketing and distribution network in overseas markets.

"Investment is not only being done in manufacturing. The higher value-added activities are actually more significant," said Ms Pavida. "So we are not only witnessing Thai companies relocating to cheaper neighbouring countries, but we are actually seeing companies that are expanding to other advanced economies."

The electronics sector also has recorded high and diversified investment outflows from Thailand, particularly to advanced economies in Europe, some Asian countries outside Asean, as well as tax havens.

"These are subsidiaries of multinational companies, particularly Taiwanese companies, that are using their Thai subsidiaries to invest overseas," Ms Pavida said, citing the example of Delta Electronics (Thailand) Plc acquiring European companies with technologies that the Taiwanese parent believes will contribute to future growth for the group.

The research shows Thai multinationals started to invest in Asean earlier and have been growing smoothly since 2005. Significant investment in other Asian countries, mainly in India and China, started to follow in 2008. New Zealand, Australia and European countries started to appear on the radar after 2009. Meanwhile, companies looking to manage their finances more efficiently have holding entities in the British Virgin Islands and Cayman Islands.

"Yes, Thai firms are active in developing Asia, but they are also active in other developed economies and tax havens. And this should not be underestimated," Ms Pavida said.

"When we hear a lot about Thai companies going to Myanmar, Vietnam and Cambodia, I think we should not overlook the Thai investments that have gone to other countries as well."

In terms of value, 50% of all Thai investment stock is concentrated in advanced economies in Europe, North America and Oceania, reflecting the size of the acquisitions by some of the country's biggest corporations. Asia and Asean account for 39%, and tax havens and non-EU countries the rest, according to Ms Pavida's research. 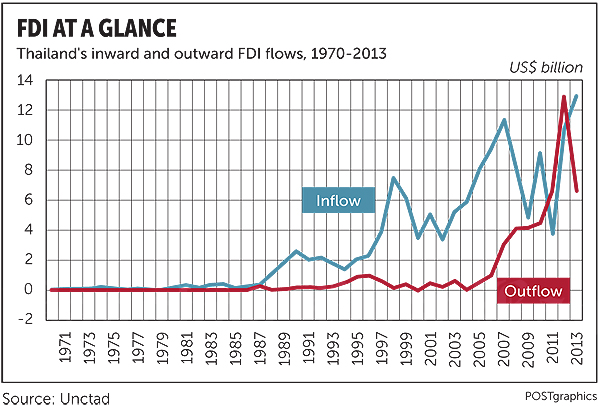 Most governments including that of Thailand, however, are still more comfortable promoting FDI inflows that can benefit the host country by offering incentives. Policymakers frequently debate whether outward FDI generates a positive contribution to the country of origin, beyond the coffers of the company doing the investing, especially in emerging economies.

Critics say OFDI activities from emerging economies can have negative impacts including a brain drain from countries already short of skilled workforce.

Ms Pavida acknowledged that OFDI was still an emerging trend for Thailand and merited further detailed study, "But the good thing is that it builds up the competitiveness of companies since investing abroad can strengthen their operations," she said.

"So if they can absorb positive spillover for the home country such as more competitive suppliers and more demanding buyers, this will generate a positive outcome for the overall economy."

Bank of Thailand figures suggest the country's OFDI has a positive impact on economic growth. A 10% increase in OFDI leads to a 1.56% increase of GDP in the long run and 1.03% in the short run.

Alvaro Cuervo-Cazurra, a co-author of the research and a professor of international business at Northeastern University, believes that the role of government in supporting OFDI will remain debatable, especially for emerging economies because they contain fewer mature companies.

"There is a high opportunity cost of the use of funds. Why should the government help companies when the same amount of money can basically produce a very large return if it's used to develop public goods that have direct impact on the national economy?" he asked rhetorically.

"There are also loopholes that larger companies who wish to expand abroad could get help from the government in forms of 'state capture'," he said, using a phrase that describes how large businesses tend to influence government policy in ways that are not immediately obvious.

However, he added that OFDI of emerging economies could help accelerate the upgrading of economic performance by obtaining talent and technologies from abroad. This can also lead to creating "national champions" and building soft power.

Assoc Prof MR Pongsvas Svasti, a former industry minister in the government of Yingluck Shinawatra, said that while Thailand had few specific OFDI policies, it been encouraging Thai enterprises to go abroad through various measures and some institutional support facilities.

However, the 2013-17 strategic plan of the Board of Investment (BoI) does have an OFDI component for the first time. It focuses on helping investors by providing a database on other countries' investment incentives, and on policies related to liberalising capital accounts to ease overseas transactions.

However, MR Pongsvas said, "Thailand is still 20 years behind China in terms of OFDI policy. Firms in Thailand are competitive but relatively small."

Among Asean nations, Singapore records the highest number of OFDI, followed by Malaysia and Thailand.

Though the question of how can OFDI benefit its home country remains debatable, a stronger OFDI policy would create fundamentals for Thai companies to shine brighter on the global stage, which could create a more positive reputation for other Thai businesses.

Ms Pavida said that at the outset, it was important for the government to actually understand the nature of outward FDI. And this entails developing a database and information on companies that are expanding abroad.

"The second thing is to encourage a broad base range of companies to internationalise regardless of size, industry and destination. So do not be fixated with only SMEs but also look at firms that are doing different thing overseas," she said.

"Try to make Thai firms competitive and then they will look at international opportunities themselves."