Apisak: Property sector tapped to be the next stimulus target
Business

Apisak: Property sector tapped to be the next stimulus target

Waiving the transfer and mortgage fees is not the main issue -- more important are mortgage approvals, as rejection rates by financial institutions are very high at the moment, he said.

"I've asked GH Bank to consider lending to those who have been refused by commercial banks, but they must not be too poor," Mr Apisak said.

They include slashing housing transfer fees to 0.02% from 2% and mortgage fees to 0.01% from 1% for housing priced below 2 million baht.

Mortgage rejection rates at some banks have jumped to 30-35%.

In normal times, a mortgage rejection rate of only 25-30% can be expected. 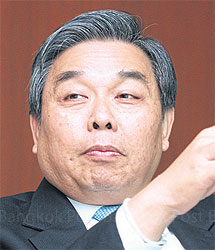 Mr Somkid and his economic team, since taking the helm late last month, have launched a flurry of economic stimulus measures aimed at revitalising the spluttering economy.

The cabinet approved them this month in a bid to put money quickly into the hands of rural residents and small and medium-sized enterprise operators, while other privileges aimed at boosting private investment are in the pipeline.

In another development, Mr Apisak said the Finance Ministry would develop a comprehensive e-payment system that could be accessed by rural residents with a single card to afford them privileges offered to low-income earners.

For example, the card could be used as a common ticket allowing low-income earners free use of public transport, he said.

However, Mr Apisak said cooperation would be needed from financial institutions for cardholders to top up their cards.

The e-payment system is envisioned as a national project, with the Finance Ministry and the Bank of Thailand asking the private sector, particularly the Thai Bankers' Association, to establish guidelines for practical regulations, he said.

The system would also help to stem tax avoidance, especially value-added tax, if it were implemented on a nationwide scale.

If the government takes in more tax revenue, the necessity to raise taxes will decline, Mr Apisak said.

But he said Thailand had so far been unable to develop the e-payment system to cover all sectors due to a lack of cooperation from all relevant parties.

Commenting on the Finance Ministry's potential incentives to attract more private investment, Mr Apisak said they would be in line with the tax measures provided to proposed "super clusters".

The government was considering granting a special corporate income tax for 10-15 years to major high-tech industries located in them.

Thailand on Sunday reported five new imported coronavirus cases, one of them a French woman, taking the total number of infections to 3,736. No new deaths were reported.

SAN FRANCISCO - Big Tech is bracing for a tumultuous week marked by quarterly results likely to show resilience despite the pandemic, and fresh attacks from lawmakers ahead of the Nov 3 election.