The swift evolution of the retail industry has lured a large pool of global luxury firms to establish their presence in Asia-Pacific over the last few decades. Sales for glitzy items across the region have been rising at whirlwind speeds amidst the surge of an aspirational middle-class and buoyant economy.

However, analysts are seeing that the days for easy money are over and the flourish moment has passed with growing evidence suggesting that lavish consumption is tilting back to the Western world where it belongs.

Owing to the extreme price differences between Asia and Europe, luxury brands with heavy exposure in Asia-Pacific are suffering from sluggish sales and revenue losses as Asian consumers are choosing to buy their goodies on the other side of the world.

"Due to the currency exchange rates, import duties and cost of operations, prices of luxury items in Asia are very high compared with those in Europe and the United States,"  Waldemar Jap, partner and managing director of Boston Consulting Group (BCG) told Asia Focus from Hong Kong.

Asians are increasingly travelling long distance, not only for tourism, but also to seek good bargains. Consequently, there have been some positive impacts on the European luxury market, while the trend is reverse in Asia.

"Chinese travellers, for instance, are going to Europe to purchase luxury products directly. Although still limited to portable items such as jewellery, handbags and watches, the trend is growing," he said. "Prices in Europe are still the cheapest, with Japan and Korea being mid-range, and China being the most expensive."

Fangting Sun, research analyst at Euromonitor International, suggested that there has been a growing trend of parallel purchasing in China, mainly due to the increasing number of consumers, who become aware of the price differentials between domestic and overseas markets, along with the development of professional parallel purchase agencies and cross-border logistics firms.

Parallel imports (also known as "grey market goods") are genuine branded goods obtained from one market, imported to another and sold without consent of the brand owner, as defined by the International Trademark Association.

Fflur Roberts, head of luxury goods at Euromonitor International, told CNBC London recently that that this ever-widening price disparity has inevitably encouraged opportunists to buy popular items in Europe in bulk and resell them in China at well below formal retail prices.

"It is a notoriously difficult trade route to track, but industry insiders believe that up to 40% of actual luxury goods consumption in China is from the grey market," she said.

Amrita Banta, managing director of Agility Research and Strategy and Affluential.com, a platform for research and advice for luxury brands, added that as e-commerce gains popularity among luxury consumers, shoppers are not only going online to research and purchase, but are also going outside their home country to make purchases at retail outlets, where these luxury goods are cheaper.

Another factor weighing on the sluggish demand in Asia-Pacific is the uncertainty of political protest in Hong Kong. "Civil unrest in Hong Kong has triggered footfall erosion in the city's luxury stores, with the flow of visitors from mainland China slowing dramatically," according to Euromonitor International.

BCG's Mr Jap added that Hong Kong used to be a big market for the Chinese luxury consumer given its convenient location and cheap prices, but over the last few years, due to European currency depreciations, the same consumers can travel to Europe and buy the same products at a lower price.

In addition, "a lot of luxury brands have raised their prices in Hong Kong and the city is now less attractive for luxury purchase tourists," he added.

Hong Kong, being the luxury hotspot for Asians, is now cooling and will further drive down purchases in the region.

"Ultimately, the luxury goods growth in Asia Pacific will be weakened by events in Hong Kong, especially categories such as designer apparel and luxury timepieces. This presents big challenges for companies that rely on Asia-Pacific for a large share of their business," according to the Euromonitor report. 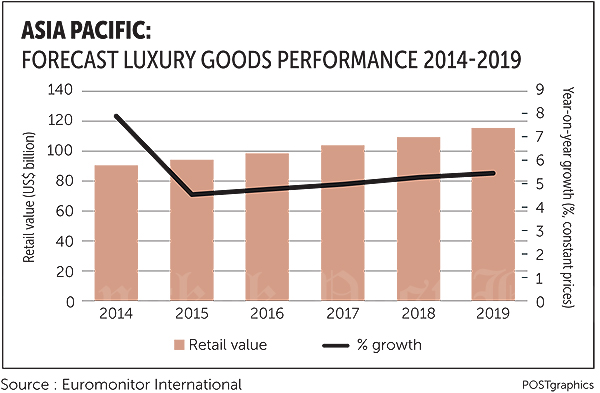 The financial performance of global luxury manufacturers is now under threat given its heavy exposure in Asia-Pacific. On an average, over one-third of their sales stem from this region; thus, slower growth, particularly in China and Hong Kong, could affect their global portfolio.

For example, French luxury goods conglomerate Louis Vuitton Moët Hennessy, or better known as LVMH, has reported a revenue dip in Asia (excluding Japan) by 6% last quarter from 2013-14, while sales in Europe are on the rise (5%), Japan (7%) and US (13%). The overall growth in Asia was down 1% last year, while the growth is seen as positive in other regions.

Wines and spirits has been hurting the most in China following the clampdown of Chinese ostentation; however, this category has been performing well globally.

Euromonitor analysts suggested that by 2017, the US will overtake Asia-Pacific (excluding Japan) as LVMH's biggest region.

LVMH is home to 70 distinguished houses rooted in six different sectors from fashions, perfumes and watches, to fancy liquor brands and luxury department stores. Asia-Pacific represents 32% share of its global retail sales in 2013, accounting for US$ 10.57 billion.

The Switzerland-based holding group Richemont has also seen a stuttering growth in the emerging markets. The company's revenue growth in Asia-Pacific (excluding Japan) dipped over 10% last quarter between 2013-14, while growing substantially in Europe and America.

Richemont's Asia-Pacific retail sales maked up 34% of its global sales in 2013, accounting for $ 4.16 billion.

American jeweller Tiffany & Co is also experiencing this pendulum swing; despite its current growth strategy of international expansion and portfolio expansion proving to be a success.

The company has seen contracting sales from 2012-14 in Japan and Asia-Pacific (excluding Japan) by 6% and 3%, respectively. Worldwide sales, however, has been growing 4%, driven by Europe (2%) and America (11%).

The company has developed a wide spectrum portfolio -- ranging from affordable products to pricier ones -- while pressing ahead its geographical store presences worldwide. About 40% of Tiffany's sales in 2013, worth about US$ 1.67bilion, come from the Asia-Pacific region. 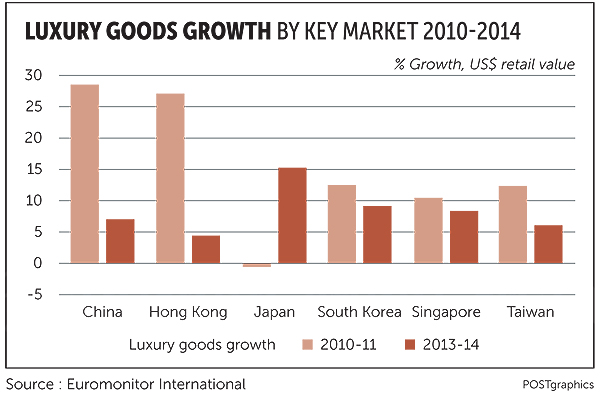 Some of the biggest trends observed in Asian consumers, particularly in China, are the higher demands for discreetness and cultural heritage. Consumers are abandoning their showy and logo-heavy luxury goods, while seeking for more discreet and logo-free luxury items.

Analysts suggested that luxury manufacturers are increasingly developing products that endeavour local cultural elements to their design. This trend can be observed in a wide range of sectors from fashion, to jewellery to automotives.

"In the past, people may have liked to purchase a bag because they want to show off the big logo and tell others that they carry an expensive bag," said Irene Ho, chief executive officer of The Luxury Network, a luxury-marketing group facilitating partnerships between premium brands.

The region is now facing the era where consumers have become more informed and knowledgeable that they no longer want to boast and brag.

"It doesn't mean that you are educated or high-class just because you carry an expensive bag," said Ms Ho. "It's about the knowledge that you have for that brand and that you appreciate the bag even if you can't tell it is a branded bag."

The trend is that people tend purchase a brand when it resonates with their personal identity, she said.

For products that do not feature their names or logo on the bags, only people that appreciate that particular brand will know it from brand characteristics.

Ms Ho cited Italian handcrafted leather goods Valextra as an example. "The luxury about this brand is if you carry a Valextra bag, people would not know because the brand name or logo is not prominently featured on the bag. Only people who appreciate the bag would know that it is a Valextra."

Euromonitor's Ms Sun agreed, saying that consumers have become more sophisticated and their attitudes and preferences have changed.

"More consumers focus on the brand heritage and design instead of purely showing off with the obvious logos. Therefore, consumer behaviours vary across demographic groups and increased diversity of preferred brands," she said.

BCG's Mr Jap added that consumers are also looking for something more unique for themselves.

"Chinese consumers used to look for products that are big brands to show their status but now they are using brands that less people use," he said, adding that they have become more open-minded to luxuries and locally-defined brands or brands that have association to local cultures.

"The latest design with exclusivity, quality and value for money without obvious logos become growingly important to them. As a result, some designer brands such as Alexander McQueen have been gaining growing attention," added Ms Sun.

Travel, "stay-cations" and the entertainment industry is another area that has been gaining popularity, according to Agility Research's Ms Banta.

"We see a large portion of the consumer's wallet; about 40% being allocated to these purchases. Hong Kong consumers allocated about 45% of their wallets to travel and entertainment-related purchases, while China allocated about 34%," she said.

Research suggests that 30% of China's affluent have travelled no less than three times in the past year. And there is still potential to grow. Cruise travel; for instance, is still low among affluent Asians, but many are planning to do so next year.

In fact, China dominates the cruise market; with its total number of passengers being equivalent to the sum of all other Asia cruise markets combined.

"Cruise tourism in Asia has been growing in double digits over the past three years and is likely to stay on this trajectory as the economic outlook for Asians improve throughout the years," according to Agility Research & Strategy statistics.

As seen, the era of the bling dynasty in Asia-Pacific will calm down and luxury brands will need to beef up their strategies in order to stay ahead of their competitors given their heavy reliance on this region.

This doesn't mean people will stop spending in Asia; though, growth in the region is expected to stabilise around 5% a year and the region will continue to be the global power house for luxury goods, stated a Euromonitor forecast.

"Compared with the United States, Asia has a more positive economic outlook and this will lead to expected increase in disposable income and luxury spending over the next 12 months," added Ms Banta.

Democrat Party executives are being urged to find a way to curb defections that are causing internal instability, the party's MP for Trang Sathit Wongnongtoey said.

The death toll from China's new coronavirus epidemic jumped past 2,000 on Wednesday after 136 more people died, with the number of new cases falling for a second straight day, according to the National Health Commission.

TBA to seek measures for sector hit by virus

The Thai Bankers' Association (TBA) has planned a meeting for on Wednesday to seek additional measures for tourism and related business operators battered by the coronavirus epidemic.