Thailand's competitiveness ranking fell one notch to 32nd in the World Economic Forum's 2015-16 index due to the country's weak macroeconomic development.

Indonesia was the only other Asean member whose competitiveness declined, sliding to 37th place from 34th in the Global Competitiveness Index (GCI) of 140 countries.

Compared with the nine other Asean members plus Japan, China and South Korea, Thailand came in sixth.

"Economic sentiment was relatively pessimistic during the time of survey. If we look at the macroeconomic score alone, our ranking fell to 27th from 19th," he said.

The university was a partner for the GCI survey conducted from February to May. 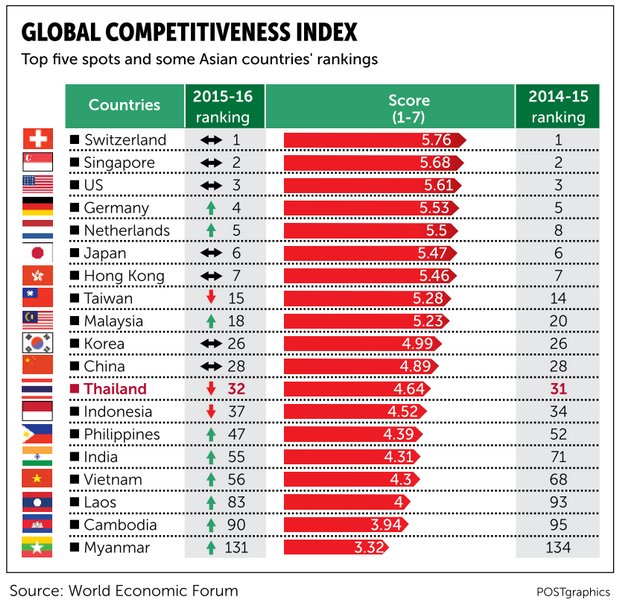 In terms of corruption, Thailand has been improving, with irregular payments and bribes decreasing under the current administration alongside a higher score for public sector performance.

"This would be better if the government could manage to communicate better to the world about what they are doing and what they will do in the short term to accommodate the business sector," Assoc Prof Pasu said.

Thailand had higher scores for innovation and technological readiness, which had the least weight in the survey.

The survey examined 12 pillars that were placed in three groups: basic requirements, efficiency enhancement, and innovation and sophistication.

"The country's ranking in innovation development jumped to 57th from 67th, while technological readiness increased to 58th from 65th," Assoc Prof Pasu said.

Thailand improved in infrastructure, higher education and training, technological readiness, market size, business sophistication and innovation factors, yet it was not enough to maintain its competitiveness ranking.

To improve competitiveness, Thailand should maintain its focus on infrastructure development, especially for the logistics network, with a need to link railway, land and air routes to cut costs for operators, Assoc Prof Pasu said.

He said Thailand was ranked in the world's top 30 in areas such as foreign market size, equities market development and export value to GDP as well as its rules and regulations for foreign direct investment.

Indonesia's ranking fell due to corruption and weak competitiveness and infrastructure.