Thailand remains curious about joining the Trans-Pacific Partnership (TPP) signed by 12 Pacific Rim countries on Monday but first wants to study the more controversial aspects of the trade pact.

Commerce Minister Apiradi Tantraporn yesterday insisted Thailand had not ignored a potential partnership in the TPP, saying the authorities in recent years had continued to study the feasibility of joining.

The ministry has hired the Panyapiwat Institute of Technology to study what effect joining the TPP would have on Thailand, particularly for controversial sectors such as intellectual property, information technology and pharmaceuticals, she said.

The ministry will soon call a joint meeting with relevant parties in the private and public sectors to evaluate the TPP’s potential effect. 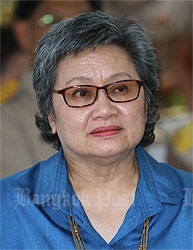 However, the minister was non-committal about a time frame for Thailand to join the TPP, saying only that authorities must carefully consider the pros and cons of participating in the pact to prevent any adverse effects in the future.

Though Asean members Malaysia, Singapore, Brunei and Vietnam have already joined the deal, Mrs Apiradi said this did not add pressure, as Thailand had signed free trade agreements (FTAs) with several of the signatories except Canada, the US and Mexico.

“Even without the TPP, we're still eligible for benefits under other FTAs,” she said.

Mrs Apiradi said the government was also committed to amending and improving existing laws and regulations to facilitate trade and investment.

“We expect negotiations to join the TPP will become much easier, as the Thai government has made many legal amendments regarding government procurement and copyrights," she said.

The Trade Competition Board, holding its first meeting under the present government last October, agreed to improve the guidelines on market domination.

It was proposed that a business entity would be regarded as dominating the market if it held a market share of more than 30% and had sales of over 500 million baht in the preceding year.

Competition conditions would also take into account factors such as market structure, number of players, positioning, concentration, barriers to entry and access to manufacturing bases and distribution channels.

The Trade Competition Act defines market domination as a market share the previous year of at least 50% and annual sales of at least 1 billion baht.

The new guidelines would cut the market share to 30% as a measure of domination but retain the annual sales figure of at least 1 billion baht.

The amendments would cover enforcement against state enterprises that run businesses in competition with the private sector, an upgrade of the Office of the Thai Trade Competition Commission to independent status and enhanced penalties and powers for that commission in filing lawsuits against violators.