Japanese expats will get tastes of home

Aeon (Thailand), the local operator of MaxValu supermarkets and Tanjai minimarts, has resumed its investment with a big retail project after suspending its expansion since 1997.

The company will today have the soft opening of Aeon Sriracha shopping centre in Chon Buri's Si Racha district to serve growing demand from Japanese expats working nearby.

The move is part of Japanese parent Aeon Group's efforts to expand its retail business in Asean with an expectation to drive sales to reach US$16 billion by 2020, a company source said.

The three-storey shopping centre has saleable space of 11,000 square metres and will serve Thai and Japanese customers who work and live nearby.

"Major frequent customers will be Japanese housewives who have free time to shop and dine at our shopping centre. They like shopping in a Japanese ambience," the source said.

Aeon Sriracha is surrounded by 1,300 households of Thai and Japanese people with high spending power. It has parking space for 220 cars. 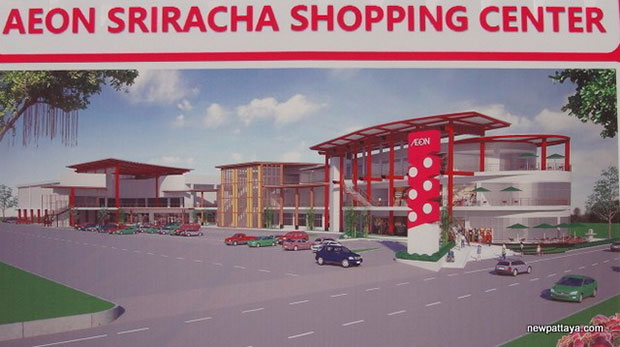 The artist impression of the Aeon Sriracha shopping centre.

This is the first time in 18 years that Aeon (Thailand) has invested in a big retail project in Thailand after suspending its expansion plan due mainly to the 1997 financial crisis.

Aeon Group has had a presence in Thailand for more than 30 years.

Apart from developing its new complex in Si Racha, the company will strengthen its food and information technology facilities to support its aggressive expansion in Thailand from now until 2020.

It has plans to expand its retail business outside Bangkok, particularly in Northeastern provinces such as Ubon Ratchathani and Udon Thani, in a bid to tap opportunities from booming border trade after the launch of the Asean Economic Community by year-end.

Of the 500 stores, 400 will be Tanjai minimarts and the remaining 100 will be under the MaxValu supermarket brand.

Sales at MaxValu supermarkets are estimated to reach 6.6 billion baht this year.