Exports to drag down 2015 growth
Business

Exports to drag down 2015 growth

Economic growth of at least 2.8% is expected this year, but dismal exports will see the Finance Ministry's 3% growth estimate missed.

However, next year's growth will fare better on anticipation that all economic engines will be in overdrive, finance permanent secretary Somchai Sujjapongse said.

His latest GDP forecast is slightly higher than the Bank of Thailand's 2.7% growth estimate for 2015. 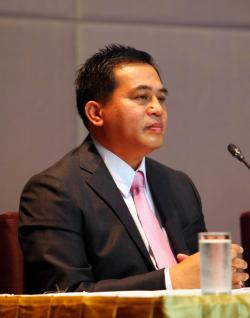 The government's recent wave of stimulus measures to help rural residents, small and medium-sized enterprises and the property sector will help to ward off effects from weak exports, he said.

Mr Somchai pegged exports to show at least a 5% decline.

Investment stimulus measures to be submitted to the cabinet in the coming weeks are aimed at making all economic engines -- public and private investment, consumption and exports -- function to drive growth next year, Mr Somchai said.

The investment package, pending Deputy Prime Minister Somkid Jatusripitak's consideration, does not include tax-related incentives, as the present corporate income tax rate of 20% is considered competitive.

However, Mr Somchai said the measures would spur investment in non-Board of Investment-promoted projects through non-tax incentives.

Tax rates are not foreign investors' main consideration but rather their decisions depend on the readiness of basic infrastructure, human resources, the political environment and the macroeconomic picture, he said.

Private investment prompted by the Finance Ministry's incentives for quick-start investment projects and public investment in infrastructure projects is expected to ramp up the overall total.

Funding for 1.33 trillion baht worth of infrastructure megaprojects will be included in the fiscal-2016 budget. They include electric trains, roads and water management.