Firm action must be taken to correct illegal practices that are drawing threats of sanctions.

The fishing industry is under heavy pressure after the European Union issued a yellow card in April alleging an inadequate framework to fight illegal, unreported and unregulated fishing, or IUU. (Photo by Chanat Katanyu)

With its economy faltering, Thailand seems to have jumped out of the frying pan into the fire.

They centre on accusations of illegal, unreported and unregulated (IUU) fishing practices, human trafficking, child labour and mistreating animals, with the latest allegation that monkeys are being exploited on coconut plantations. 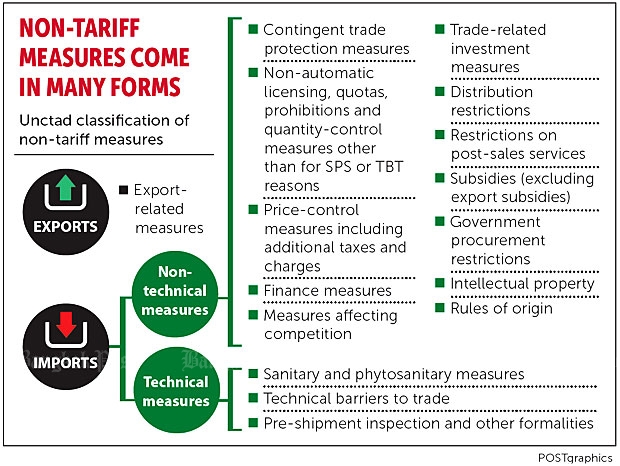 Many Thais may feel the country is being bullied and unfairly treated, but some in the private sector admit the accusations have grounds.

"It's now no use any more to think that we are being maltreated, bullied or harassed by the countries that accuse us of those issues," says Pornsil Patchrintanakul, an adviser to the Thai Chamber of Commerce.

"We must cut off that mindset and admit the fact that we have had such problems for a long time, particularly in the fishing industry. What we should do right now is fix those problems."

He says international trade rules keep changing and are more dynamic, so Thailand must upgrade and formulate measures to ensure sustainable solutions.

He points out that non-tariff measures, particularly about social and environmental issues, are expected to proliferate because consumers' behaviour has changed, leading manufacturers to change their production methods accordingly.

According to the UN's 2009 definition, non-tariff measures are policy measures other than ordinary customs tariffs that can have an economic effect on international trade in goods, changing quantities of trade or price or both and covering a wide range of policies, regulations and standards. They come in many forms including technical and non-technical measures.

Non-technical measures include non-automatic licensing, quotas, prohibitions and quantity control other than for SPS or TBT reasons, price control measures including additional taxes and charges, subsidies, intellectual property and rules of origin.

Some of these measures may constitute non-tariff barriers that have a protectionist intent. 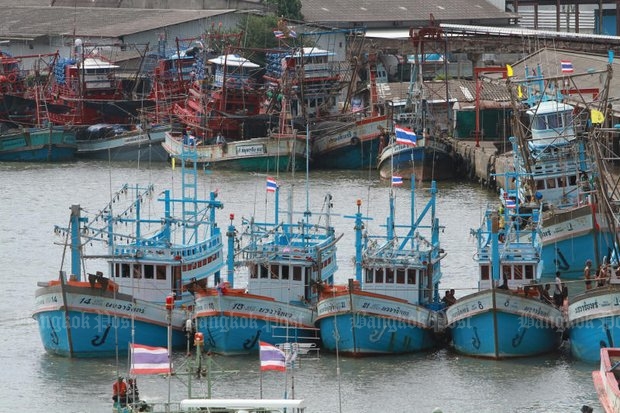 Boats are docked on both sides of the Pattani River in Pattani's Muang district following the enforcement of new regulations to curb illegal fishing. (Photo by Tawatchai Kemgumnerd)

"We have yet to hear what the government sector will do in handling the social and environmental issues," Mr Pornsil says.

"For instance, related parties in maize production have yet to sit and talk about how to prevent plantations from hurting environments and causing deforestation. The Science and Technology Ministry and Agriculture Ministry should also discuss more seriously reforming the country's overall production structure, as the impact is not only on exports but also people in the country as a whole."

The government is being urged to look at the natural resources used in production of each farm product and assess whether they are competitive with Thailand's trade rivals.

With more trade liberalisation and lower import tariffs that result in an easy inflow of goods from various destinations, it is fair enough, particularly for developed countries, to require quality standards for imported products on a par with those made in their countries to protect their consumers' health, Mr Pornsil says.

"We may consider their quality standard requirements as non-tariff barriers," he says. "But if we want to sell them our products, it's a must for our exporters and manufacturers to make and sell products at quality standards they require by using more technology and innovations." 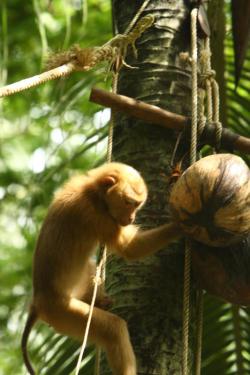 Training monkeys to collect coconuts has led to concerns over animal welfare.

"With more trade liberalisation resulting in tariff reduction, non-tariff measures will proliferate and some may eventually develop into non-tariff barriers," he says.

"Thailand must develop and upgrade to catch up with changing rules, regulations and standards mainly in Europe, the United States and Japan, which uphold the most non-tariff measures."

Thailand also needs to develop a traceability system in keeping with importing countries' requirements so that non-tariff barriers will then become export opportunities, he says.

Wisarn Pupphavesa, a senior advisor at the Thailand Development Research Institute (TDRI), says environmental issues are expected to be included in the next non-tariff barriers because global consumers are more concerned about the environment and social impact, citing IUU fishing as a good example.

He says non-tariff measures are expected to proliferate in developed countries, which normally prefer a higher quality of life and better environments.

Amid low or even no import tariffs, Adam Heal, associate economic affairs officer for trade and investment at the UN Economic and Social Commission for Asia and the Pacific (Escap), told a recent seminar hosted by TDRI that non-tariff measures are likely to increase in Asia-Pacific markets to protect countries' industries, health and environments.

He says such measures would lead to higher production costs and competition for developing countries, as infrastructure gaps, weak export services and less advanced production and testing facilities would require outsourced laboratory testing and certification of food products.

The higher costs can erode advantages, while many businesses in developing countries, especially small and medium-sized enterprises, may lack the resources to analyse and understand non-tariff measures that their exports face.

For example, agricultural products such as fruits are often subject to stern testing and certification requirements in markets such as the EU.

According to an Escap study, exports of live animals are the most affected by non-tariff measures, followed by vegetables, beverages and tobacco, fats and oil, and vehicles.

And according to TDRI, SPS measures and TBT comprise 90% of imposed non-tariff measures. Commerce permanent secretary Chutima Bunyapraphasara says Thailand has tried as hard as it can to meet the high standards of foreign countries, particularly over the IUU fishing issue.

The cabinet last week approved a raft of measures to deal with IUU fishing as the country struggles to meet an EU deadline in December to clamp down on illegal fishing or risk being hit with damaging trade sanctions.

The measures include the Royal Ordinance 2015 -- a plan to regulate fisheries -- a fisheries management plan and a national plan of action, all of which will clean up the sector in line with EU standards.

The ordinance sets out measures to deal with illegal fishing including the establishment of fishing zones, issuance of licences based on vessel sizes, and prevention of transboundary illegal fishing and hazardous fishing methods.

A vessel-monitoring system will also be put in place, with devices to track fishing boats and a port in-port out surveillance system that logs data about boats' activities including equipment used, types of fish caught and where the fish came from.

Ms Chutima says the Commerce Ministry has held roadshows abroad to foster understanding about the IUU issue and the government's legal developments. The ministry is also committed to strictly controlling imports of raw materials to ensure that imported fish are from permissible sources.