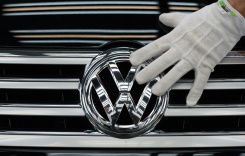 VW is engulfed in a huge pollution scandal that was initially centred on so-called defeat devices -- sophisticated software fitted into diesel engines to skew the results of tests for nitrogen oxide emissions.

"We believe that the emergence of a fraud of this magnitude, going either unnoticed or uncorrected by top management for so long is not consistent with a rating in the 'A' category," said Fitch.

The agency said it had therefore downgraded Volkswagen to "BBB+" over the "corporate government, management and organisational issues highlighted by the ongoing emission test crisis".

VW is engulfed in a huge pollution scandal that was initially centred on so-called defeat devices -- sophisticated software fitted into diesel engines to skew the results of tests for nitrogen oxide emissions.

The carmaker has admitted to fitting 11 million diesel engines worldwide with the rogue software, triggering both regulatory and criminal investigations in several countries, including Germany and the United States.

But last week, Volkswagen revealed that beyond the nitrogen oxide scam, it had also understated carbon dioxide emissions of 800,000 vehicles, including petrol cars.

The latest revelations give rise to "the possibility of further problems still to be uncovered", said Fitch, as it put VW on negative watch.

In a protest Monday, environment group Greenpeace added a "C" and "2" on either side of the company's circular logo at the entrance of a factory in Wolfsburg, forming "CO2", and hung a banner bearing the slogan "The Problem" next to it.

As Volkswagen prepared to recall millions of cars to remove the defeat devices, Germany's transport ministry said Monday that out of the 2.4 million affected cars in the country, around 540,000 would require hardware repairs.

Volkswagen had earlier said that the repair work required for the 11 million cars could range from a simple software tweak to a major engine overhaul.

The company's top management is meeting Monday on the latest carbon emissions revelations, which has sparked speculation about the role of VW's former chief executive Martin Winterkorn.

The ex-boss quit in September at the height of the storm over the pollution cheating. According to press reports, targets on technical performance and costs set by Winterkorn had pushed engineers to resort to fitting cheating devices in the vehicles.

Volkswagen has said the carbon emissions cheating was revealed by the group's employees. "The question of how we got there is the subject of an investigation," the group said.

Meanwhile, Germany's consumer association wants auto giant Volkswagen to give compensation vouchers to German customers affected by its massive pollution cheating scandal, as the company has offered to do in North America.

"The group must assume its responsibilities," said Klaus Mueller, president of the Federation of Associations for the Protection of Consumers, in an interview with the Rheinische Post newspaper on Monday.

"A voucher is the minimum that the company can give to compensate affected consumers," he added.

Mueller's call came as Volkswagen's US arm offered owners of its diesel cars a "goodwill package" of $1,000 (929 euros) worth of gift and fidelity cards.

Owner of cars with 2.0-litre diesel engines will receive a $500 prepaid Visa credit card and $500 in credits at VW dealerships, plus three years of free roadside assistance, to restore their loyalty to the brand.

VW subsidiary Audi will offer a similar package to owners of Audi models with the same engines.

"We are working tirelessly to develop an approved remedy for affected vehicles," said Volkswagen Group of America president and chief executive Michael Horn in a statement.

"In the meantime, we are providing this goodwill package as a first step towards regaining our customers' trust."