Labourers work at a construction site of the Red Line mass transit project in Bangkok in October. Infrastructure projects are expected to help boost growth next year. (File photo by Pattarapong Chatpattarasill)

The economy grew more than analysts projected in the third quarter as government stimulus spending and a rise in tourist arrivals offset weak local demand and exports.

Gross domestic product gained 2.9% in the three months through September from a year earlier, compared to 2.8% in the previous quarter, the National Economic and Social Development Board said in Bangkok on Monday.

That compares with the median estimate of 2.5% in a Bloomberg survey of 26 analysts.

"This was primarily because manufacturing production gradually resumed. In the meantime, service-related sectors still continuously boosted up; predominantly hotels and restaurants, transportation and telecommunication as well as wholesale-retail trade.

"Nevertheless, agricultural sector continued to decline owning to a reduction in crop cultivation," the economic think tank wrote in a statement released on Monday.

GDP grew 1% over the previous quarter, up on the predicted 0.6% gain.

The NESDB now expects exports to shrink 5.0% this year, rather than fall 3.5%.

The Bank of Thailand (BOT) has forecast economic growth of 2.7% this year and 3.7% in 2016. It will give new forecasts next month.

The Bank of Thailand (BOT) has forecast economic growth of 2.7% this year and 3.7% in 2016. It will give new forecasts next month. 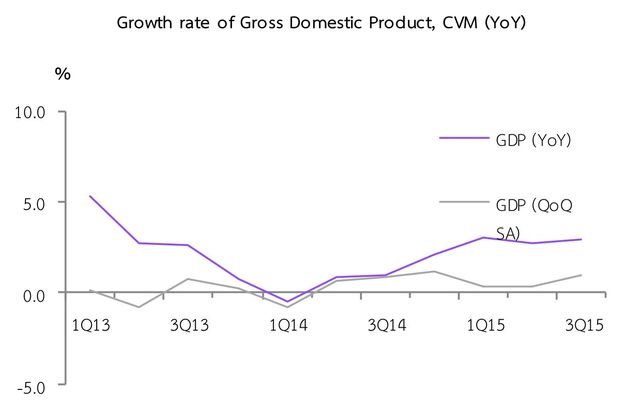