Land of the digital Thunder Dragon

Employees of Southtech Bhutan work in their office at the Thimphu TechPark, which is home to about 600 mostly young tech workers in total.

For many, the Himalayan Buddhist kingdom of Bhutan is more likely to conjure up images of a mediaeval "Game of Thrones" realm than of tech-infused modernity. Set high above the snowline, the nation is ruled by a Dragon King, remote and steeped in old-world traditions of monastic asceticism. The government is still largely dependent on foreign aid. In 1999, the Bhutanese people became the last in the world to experience television.

But in the age of information, even the most isolated places on earth are finding it easier to connect to global commerce. Bhutan, known as the Kingdom of the Thunder Dragon, is slowly beginning to plug into the digital world, attracting the first modern tech jobs for a young generation that can no longer depend on government posts to be available after graduation.

Having a private sector is such a new concept that, superficially, transformation amid this terrain is hard to spot. The country's first IT park, perched on a lush green hill in Thimphu, the nation's capital, features low-angle rooftops and intricately carved wooden windows that seem better suited for a traditional Bhutanese temple than a home of technology jobs.

Yet, within these walls are office cubicles housing young men and women in settings that could be mistaken for scenes out of India or the Philippines, the world's top destinations for global businesses seeking solutions to cut costs by taking advantage of a large English-speaking populations.

At almost 800,000 people, Bhutan's population is not large, but it is largely English speaking. "Bhutanese start learning English in primary school, similar to those in the Philippines, and our education system is all in English," Dr Tshering Dorji, CEO of the Thimphu TechPark, told Asia Focus. "Actually, we have a higher percentage of the population that speaks English than India."

The 600 Bhutanese workers employed at the IT park have jobs now because of a push by the government to chip away at rising unemployment, which has risen from 7.3% in 2012 to 9.4% in 2014, according to the government's annual Labour Force Survey report.

"When I graduated in the end of 1999, there were a total of only about 200 graduates [in Bhutan] that year, and we all had jobs waiting for us in the government," says Dr Dorji. "But last year there were 3,000 graduates and 2,500 of them had to look for jobs in the private sector and many of them are still looking. This is mainly due to the free education offered by the government, which has achieved nearly a 100% primary school enrolment rate now."

Thimphu TechPark, on a lush green hill, features traditional touches that seem more suited for a traditional Bhutanese temple than an IT hotbed.

Since opening its doors in 2012, the IT park has birthed a nascent tech scene and witnessed changes as quick as the Himalayan winds.

"I still remember when I did an internship under a telecom company and the development of a very basic interface was outsourced to a Bangladeshi company," says 27-year-old Arpan Lepcha, who leads a team at the Thimphu TechPark for Zurich-based Secure Link Services, a software developer. "But now graduates can come back and actually dream of working in companies within Bhutan that produce software at a global standard."

"People still do prefer government jobs," Lecha admits, "but there are new breeds of young graduates who are trying their hands on entrepreneurship."

Housed within the Thimphu TechPark is the Bhutan Innovation and Technology Centre, the country's first accelerator, where Bhutanese are getting their first taste of private sector-style risk and reward. The government-run accelerator also acts as a data centre, which sources its power from hydroelectric plants, a cheap, green and plentiful source of energy in Bhutan.

"We harness power from our many fast-flowing Himalayan rivers," says Dr Dorji. "Our total hydropower capacity is estimated at about 30,000 megawatts, but now only 1,488 MW are tapped. We have a very low cost of electricity at just 3.23 ngultrums a unit (about 5 US cents)," he adds.

Unlike the outsourcing capitals of India and Philippines, which thrive primarily on call-centre work, Bhutan has used such incentives to attract fully fledged techie jobs, such as software developers, as well as creative industry jobs, best exemplified by Thimphu TechPark's anchor tenant. 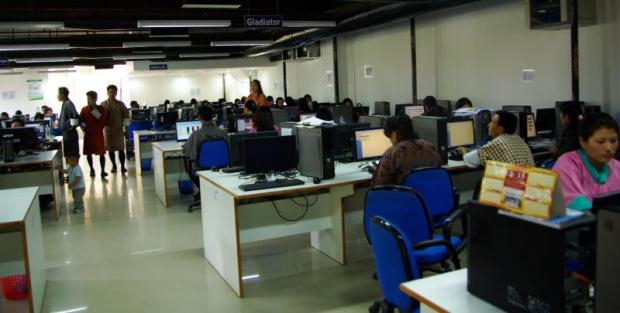 San Francisco-based ScanCafe employs about 450 people, the lion's share of the workers at the IT park, which includes those who curate and edit photos. ScanCafe's Bhutan operations are now its largest, surpassing the about 270 people it employs in Bangalore.

"We employ what we call 'Photo Story Tellers'. We curate and select the best photos from a consumer's photo archive and eliminate the digital photo clutter," says ScanCafe CEO Naren Dubey, a Wharton graduate who discovered Bhutan during his MBA research on the country's Gross National Happiness (GNH) metric, first promulgated by former king Jigme Singye Wangchuck as an attempt to quantify the success of a country in terms of happiness, not production.

"Having grown up in neighbouring India where GNH is clearly low, I was so overwhelmed by the positive atmosphere that I decided to take a bet on starting an operation in Thimphu," Dubey remembers.

Yet, while the GNH metric has never really caught on among mainstream economists as a viable tool for global use, the Bhutanese people's attitudes, loyalty and unique sense of judgement may just prove a more potent brand.

"At the costs we are looking at, the talent in Bhutan for these skills is superior to most other countries we've looked at: aesthetic judgement and an ability to tell stories with photographs," Dubey said.

"Our attrition in Bhutan is a fraction of that seen in India or the US. I can go on giving specific examples, but the one that moves me the most is when I saw employees bringing their guitars to work and stepping outside onto the office lawn to sing songs during breaks. I just haven't seen that anywhere in the world, even at Googleplex or the Facebook campuses in Mountain View, California."

In fact, the IT park's drive to lure in more investors could be the metric that defines Bhutan's health best in the long run. At its core, IT investment means greater hope for introducing work beyond traditional private jobs familiar to agrarian-based economies.

"Except for a few family-run business groups, most of the private sector consisted of small-scale shops up to ten years ago. Foreign direct investment (FDI) was almost unheard of," Dr Dorji remembers.

"Today, our private sector is still small, in terms of, say, contribution to GDP for instance. But now with the IT Park in full operation, FDI in the IT sector is also coming up."

"Over the years," adds Lepcha, "I have seen the vacant empty spaces at the IT park being filled.

"There are people coming up with fresh ideas and approaching us to build tools for them. Maybe in future, the park could help attract [seed] funding for those great ideas."