Skyrocketing prices of land in key border provinces are expected to stabilise over the next few years, according to the Real Estate Information Center (REIC). 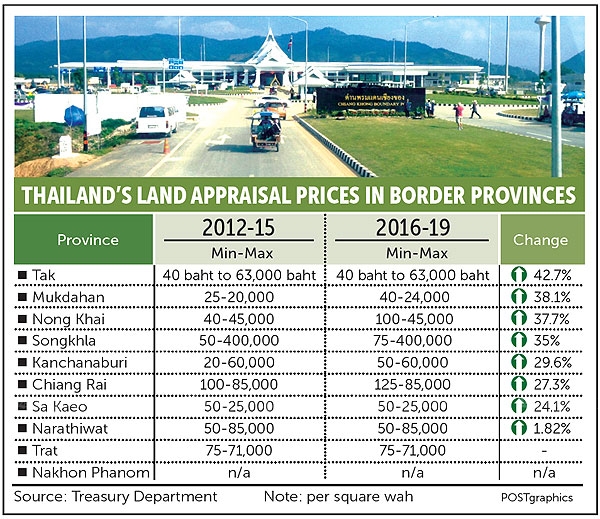 Thanks to flourishing border trade and the presence of special economic zones (SEZs), land prices will not fall despite the slowdown in property transactions since the government announced it would use plots owned by the Treasury Department for SEZ development, said director-general Samma Kitsin.

"Land transactions during the past two years slowed down as investors waited for a clear SEZ development plan from the government," Mr Samma said.

Land near the Cambodian border in Aranyaprathet district of Sa Kaeo has soared in value, driven by booming trade at Rongklua market.

Locations near the market fetched the highest prices of 10 million baht per rai due to strong demand from Thai, Chinese, Taiwanese and Korean investors.

As land near the market became more scarce, plots in subdistrict Pa Rai rose 20 times from less than 50,000 baht to 1 million baht per rai.

In the near future, MM Mega Market, a shopping centre developed by Charoen Sirivadhanabhakdi's TCC Group, is due to open near Rongklua market.

Indochina Trade Center (Aranyaprathet) Co, the developer owned by the Viriyaprapaikit family, plans to develop Indochina Minifactory on 60-rai in Pa Rai to rent out warehouses at between 1,200 and 17,800 baht per month. It will also develop a theme park.

In Trat, land prices in Mai Root subdistrict of Khlong Yai district near the Cambodian border soared four times to 2 million baht per rai after the area was named as an SEZ.

In Muang district, a Japanese investor wants to build a condo for senior people on a 4,000-rai plot in Tha Prik subdistrict.

Mr Samma said Mae Sot district of Tak was one of the most booming border locations as many large investors sought to tap Myanmar's growing economy.

According to a REIC survey, Mae Sot has 10 residential projects -- five condo projects with 770 units and five low-rise housing sites with 180 units.

A runway at Mae Sot airport is being expanded, a Robinson shopping mall will open next month and a shopping complex is being developed by MBK Group.