SET-listed Quality Houses Plc (QH) admits it expects to miss both presales and revenue targets this year because of weak demand in the luxury residential segment.

The high-end property developer reported revenue of 12.7 billion baht and presales of 18 billion in the first nine months this year.

However, it started to feel the pinch from the slow economy in the third quarter when operating results showed a heavy decline. 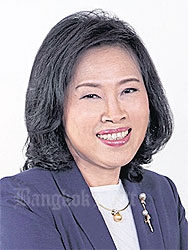 Senior executive vice-president Suwanna Bhuddhaprasart said the company might not achieve its revenue target of 22 billion baht and presales target of 23.6 billion this year.

But she is confident the full-year result will be the same as last year after an improvement in the final quarter.

She attributed the weak performance to the stricter policy of commercial banks in approving loans, especially for mid-range housing projects, although the segment remains strong.

This resulted in high rejection rates from banks for 50% of applications. This affected sales of the developer's residential projects in the third quarter, she told Stock Exchange of Thailand investors yesterday.

Mrs Suwanna said Quality Houses remained optimistic about high-end projects and expected its revenue to increase in the final quarter.

The construction of its luxury condominium in the Asok area of Bangkok will be completed this quarter, while it expects ownership transfers from customers will realise revenue of about 2 billion baht.

The government's stimulus plans to slash transfer and mortgage fees for houses priced below 3 million baht is another condition that could spur the housing market, she said.

"Home sales in November are picking up after the launch of the government package," she said.

Next year the company plans to launch 21 projects worth 25.7 billion baht.

Revenue from high-end projects will gradually decrease over the next three years to represent only 20-25% of the total, down from more than 50% now, while the mid-range segment will contribute 40% and premium economy the rest.

QH shares closed yesterday on the SET at 2.28 baht, down four satang, in trade worth 53.67 million baht.