WASHINGTON - After a long buildup that stirred waves of turbulence in global markets, the Federal Reserve finally is expected to end its seven-year crisis stance with an interest rate increase on Wednesday. 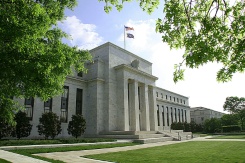 Most bets are that the Fed will increase the benchmark federal funds rate for the first time in nearly a decade, signaling confidence in US economic growth even as the rest of the world sags.

A move has been well-flagged for months now by Fed Chair Janet Yellen and others on her team. About 97% of economists surveyed by the Wall Street Journal expect the increase.

Yellen made clear at the beginning of this month that she believes that longstanding arguments against an increase -- inflation is absent and the jobs market still shows weakness -- will dissolve through next year.

"I anticipate continued economic growth at a moderate pace that will be sufficient to generate additional increases in employment, further reductions in the remaining margins of labor market slack, and a rise in inflation to our 2% objective," she said in a Dec 2 speech.

If the Fed waits too long, she added pointedly, "we would likely end up having to tighten policy relatively abruptly to keep the economy from significantly overshooting both of our goals."

That speech "was really intended to tell the market that, yes, they are planning to raise rates at the next meeting," said Stephen Oliner of the American Enterprise Institute.

The Fed's policy body, the Federal Open Market Committee, meets on Tuesday and Wednesday to weigh raising the fed funds rate, a short-term peg for interbank lending which influences rates throughout the financial system, from 0-0.25% to an expected 0.25-0.50%.

The rate was pulled down to zero in an unprecedented series of very sharp cuts in 2008 as the economy sank into a deep recession.

It has not budged since then, as the climb back to firm growth has been much slower than expected.

But the result of the Fed's ultra-easy money policy has been to flood the US and global economies with trillions of cheap dollars that some critics worry will spark uncontrollable inflation and new asset bubbles.

Neither has happened. But Yellen, stiffly opposed to a rate increase over her first 18 months as Fed chair, has turned more in favor recently, even as some of her FOMC colleagues have remained unconvinced.

Media reports have depicted her working behind the scenes in recent months to build consensus behind a rate hike. In her speech, she conceded that she is "looking forward to" the day she can begin raising rates.

The challenges are much like they were more than a year ago when Yellen said she expected the lift-off from zero around the middle of 2015.

First, although the unemployment rate has fallen steadily, to 5.0% now, there is still an uncommonly large number of people who have dropped out of the labor market, suggesting the recovery from the Great Recession has fallen short.

Second, rather than move toward the 2% goal, inflation has actually fallen, though the main reasons have been the fall in fuel prices and those for imported goods, due to the stronger dollar and global slowdown.

With the rest of the world in a slump, prominent economists like Larry Summers and Paul Krugman have warned about raising rates when the risks of a reversal to US growth remain significant.

If the Fed is wrong on inflation picking up, Krugman wrote in the New York Times, "a rate hike could end the run of good economic news."

In that case, he said "it's not at all clear what the Fed could do to fix its mistake."

But having let expectations get so wound up, others say it would now be a mistake for the Fed to hold off, which could suggest the fed has unspoken concerns.

"If they don't go, that sends the wrong message about confidence in the economy. And I think it will be will be detrimental to market if they don't go," Ellen Zentner, chief US economist at Morgan Stanley, said on CNBC.

"The US economy should cope well with a less expansionary approach to monetary policy, as, unlike in the last economic cycle, consumers are well prepared for rising interest rates thanks to much lower debt," said Jorg Kramer, chief economist at Commerzbank.