Ensuring that education and training match real-world needs is the only way for an integrated Asean to reach its full potential. By Nareerat Wiriyapong in Singapore

Each of the 10 Southeast Asian nations has challenges to overcome to bolster and sustain economic growth at a time when the global economy is weak and competition is intensifying.

But one challenge they all have in common is the skills gap in the workforce, which takes different forms in each economy. The right policies and incentives are required to help close the skills gap, otherwise it will be difficult for Asean members to successfully move to the next stage of development, say experts.

"While each of the Asean-5 countries is focusing on developing different industries, they all face the same need in providing a wide array of skills to support their economic transformation," said a research report by Singapore Management University (SMU).

These include a broader set of soft skills such as English language command, IT and management skills, as well as general and job-specific professional skills. Some of those skills are especially relevant for countries that intend to develop high value-added manufacturing industries, said the report commissioned by the global financial services firm JP Morgan.

Despite the proliferation of training and institutions as well as the increased enrollment and completion rates in Asean nations, many companies still find it difficult to recruit trained workers with the relevant skills, it added.

"Whether Asean countries realise their growth potential to become a significant player in the global economy depends crucially on their ability to provide a sufficiently large number of workers with the relevant skills to meet the challenging needs of the growth industries," the study said.

Asean needs an adequate supply of trained workers to meet the demands of industries that are deemed to be economic growth drivers. Without the right skill sets, it would be difficult for the workers in Asean countries, especially younger ones, to play a meaningful role in the restructuring and upgrading of these economies, said the report.

Ronnie Chan, co-chair of the Hong Kong-based Asia Society, said Asean was at a crucial stage in its development and needed to close the skills gap before it affects the growth of the region.

"There is now a need to further strengthen Asean's human capital by building the right skills of the workforce in order to sustain the region's economic growth in the medium and long term," Mr Chan told a forum on Asean workforce readiness held recently in Singapore. 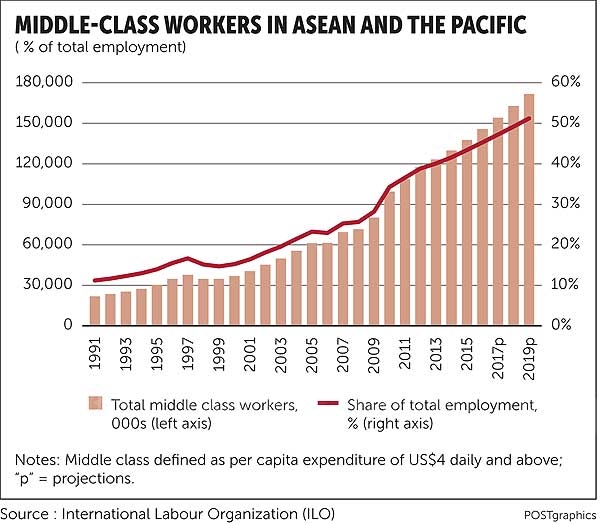 In Indonesia, Asean's largest economy, skills gaps pose a serious challenge to growth and development across all industries because of constraints on the supply side. Both the quantity and quality of trained workers is inadequate at all levels including the tertiary level.

"Surveys suggest that there is also a lack of English language proficiency, computer and critical thinking skills in the workforce," the SMU report noted. "Practical job-specific knowhow is deemed to be weak, affecting the overall productivity levels."

The problem is complicated by insufficient coordination of curriculum planning and certification standard-setting across training institutions, which undermines the effectiveness of the training programmes, it added.

Thailand, meanwhile, faces two skills gaps challenges. There is uneven quality and a shortage of skilled workers, and also uneven quantity which is especially severe in science, technology and related fiends. Surveys consistently find that Thai workers lack English language proficiency, IT and other soft skills, while the number of unskilled workers from Myanmar might begin to fall as employment opportunities in the neighbouring country improve.

"Industry leaders recognise that skills gaps will likely pose hurdles for industries that the Thai government is trying to promote as key growth drivers including tourism, agriculture and manufacturing sectors such as automotive, biochemical, electronics, food processing and jewellery," the report said.

Such shortcomings are also seen as a potential obstacle for the digital economy, which the government hopes to develop as a new pillar to raise competitiveness and productivity.

For Malaysia, which is moving from labour-intensive to technology-oriented manufacturing, substantial skills gaps exist in a number of key industries including IT and business process outsourcing (BPO), tourism, healthcare, aviation maintenance, repair and overhaul industries.

"A significant outflow of experienced and skilled professionals, managers, executives and technicians has made it more difficult to address the skills gaps issue in Malaysia. There is also an overall need to improve the workforce's English language proficiency, analytical and cognitive skills," the SMU report said.

Meanwhile, labour market inefficiency in the Philippines causes an oversupply of certain professions such as nurses, school teachers and seafarers. Exacerbating the problem is the large outflow of skilled workers, especially managers and professions in the hospitality and tourism sectors as well as those in technical fields such as IT and engineering.

"Not enough attention is seen to be given to addressing this issue because Filipino workers overseas are regarded as a main contributor to the economy through the remittances they send back home," said the report.

In Singapore, efforts are being made to reduce the reliance on foreign workers and to retrain local workers to meet the demand of five sectors the government has identified as future growth clusters -- advanced manufacturing, health sciences, urban solutions, logistics and aerospace, and global financial services.

"Being an education hub, Singapore attracts a large number of students from the region, who often join the workforce after graduation and help fill skills gaps," the report said.

Jusuf Wanandi, co-founder and senior fellow of the Jakarta-based Centre for Strategic and International Studies (CSIS), said Asean had a lot to catching up to do relative to other regions, despite the very encouraging increases in government spending on education and training.

While enrollment in tertiary education has also risen strongly in Asean, annual spending per student varies widely from US$539 a year in the Philippines, to $2,188 in Indonesia and $19,000 in Singapore.

"The composition of tertiary education in Asean is biased against science and engineering, the fields of study that serve as the springboard for the technological innovations," he told the Singapore symposium, which was co-sponsored by JP Morgan and the Asia Society.

In Indonesia and the Philippines, the two most populous members of Asean, science and engineering account for just 22% and 26%, respectively, of the total number of graduates. While enrollment in secondary education has risen strongly in Asean, the real need is for more vocational education and training. Even existing vocational facilities are in urgent need of improvement to be able to supply graduates who can compete globally in a world market that is seamlessly connected through digital technology, he added.

Mr Wiwandi said the workforce in Asean was expected to grow progressively until 2020, especially in the Philippines, Indonesia and Vietnam. At present, the region is also the origin of 14 million migrant workers, 6 million of whom live and work within Asean, as intra-Asean migration continues to accelerate with Singapore, Malaysia and Thailand the most popular destinations.

"Labour and employment are an area where bold initiatives are needed. We have opened our borders for intra-Asean flows of skilled workers. I am wondering whether or not we have done enough to make our workers mobile or 'tradable' through world-class education," he said, adding that further regional collaboration was needed to address the issue.

The SMU research report suggested that links between classroom learning and practical training with companies in most Asean-5 countries needed to be strengthened to ensure the relevance of training, with the impact of technological change also emphasised.

"Employers are reluctant to invest too much in training that might be rendered obsolete soon," it said, suggesting that government policies should pay close attention to understanding changes in technology and their impact on the needs for different skills.

The government can also play a significant role in providing information about skills gaps in key industries. To do this effectively, it needs to embrace active, structured and accountable consultation with industry players on a regular basis.

"Closer government-private sector collaboration, including more targeted incentives, could help expand such training to a wider group of workers to help reduce skills gaps across industries," said the report.

A surge in cross-border labour mobility following establishment of the Asean Economic Community (AEC) at the end of 2015 could complicate the management of skills gaps at the national level.

"Cooperation and coordination among Asean countries on intra-regional labour flows could prove to be essential in helping to provide a more effective mechanism to address the skills gaps that each country member faces," it added.

The Criminal Court on Wednesday lifted its order for the closure of all online platforms of four media outlets and an anti-government movement, including VoiceTV, saying only illegal content should have been blocked, not the platforms.