Shopping in a department store from today until Dec 31 will be eligible for the tax deduction under the government's policy to present New Year gift to the people. (Bangkok Post file photo)

The government’s holiday-shopping tax reduction likely will cost the state up to 5 billion baht, according to Finance Minister Apisak Tantivorawong.

The "New Year's gift" allowing shoppers to get up tax deduction on select purchases of goods and services worth a maximum 15,000 baht purchased today through New Year's Eve was published on the Royal Gazette.

The 15,000 baht is deducted from a taxpayer's total taxable income, lowering a shopper's overall tax burden. It is not a 15,000 baht refund on purchases made this holiday season.

According to the announcement, the measure excludes liquor, beer, wine, tobacco, gasoline and gas for vehicles, automobiles, motorcycles and boats.

However, the Revenue Department has clarified more of what cannot be claimed. It says only goods and services eligible for the value added tax will qualify for the deduction.

Many people telephoned the department to ask whether gold was included in the list. As gold is not sold under the VAT programme makes it ineligible, but goldsmith fees can be claimed.

Payment for utilities, such as water and electricity, cannot be claimed as the services were consumed before Dec 24.

Prasong Poontaneat, director-general of Revenue Department, said people paying for cosmetic surgery and medical fee could not claim for the tax reduction as these items got VAT exemption.

Mr Apisak said the measure would likely to help spur the domestic economy with anticipated rise in gross domestic product of 0.1-0.2% for 2015.

A preliminary projection revealed that the scheme would cost the government 4-5 billion baht.

"The measure aims to assist the people with their spending. The loss in government revenue is not a problem because the government wants to give a New Year's gift and bring happiness to Thai people and stimulate spending," he said.

Mr Prasong noted that shoppers should not be confused in thinking they will be getting 15,000 baht in shopping purchases free. The tax savings depend upon personal tax rates. Shoppers paying only 5% in personal income tax would see their tax bill drop by only 750 baht.

For other New Year's gifts that the government has announced, see the inforgraphic below. 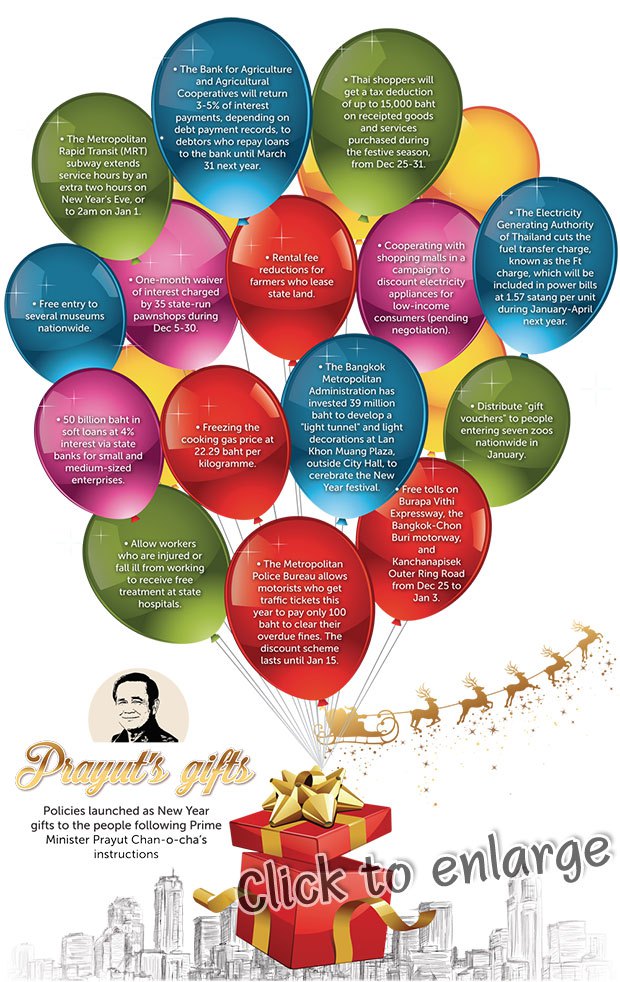 Board allays unease over sugar supply