Purple Line to run from August

This year, people in Bangkok and its outskirts will enjoy riding on the Purple Line electric trains running from Nonthaburi's Bang Yai district to Bang Sue district in Bangkok.

But the bad news is traffic chaos is expected to intensify as the construction of more rail routes gets under way.

The construction of the Purple Line has been completed and the operational testing is now under way. The service will be officially launched in August, Chartchai Thipsunawee, permanent secretary for transport, told the Bangkok Post.

Mr Chartchai said when the service is provided, it will become the fourth electric train line in the country and the first route to connect Bangkok's suburbs and inner areas.

Meanwhile, he said six other projects will undergo bidding for construction contracts this year. Construction of two of them -- the Red Line on the Bang Sue-Phaya Thai-Hua Mak section and the Dark Red Line linking Bang Sue-Hua Lamphong -- will begin in July and October respectively.

Mr Chartchai added that in 2017, construction of another four lines will commence and they should be completed in 2022.

Speaking about delays to the projects, Mr Chartchai said electric train projects have faced difficulties in finding train operators and procuring locomotives and carriages after construction has been completed.

For example, the Red Line section from Bang Sue to Taling Chan was built in 2012, but the service could not be launched right away, he said.

It needs to wait for the train operation system of the line's Bang Sue-Rangsit section to be completed first. The section's construction will be finished in 2018, he said.

Another example is the Blue Line (Hua Lamphong-Bang Khae and Bang Sue-Tha Phra sections), which is due to be built in 2019.

The government is still struggling to find a private company to take charge of operating the train system although the project is scheduled to be launched in 2020, he said.

Bangkokians, meanwhile, are expected to face heavy traffic along the rail routes where the construction of the electric train lines is under way, he said.

From this year to 2019, up to 10 rail routes will undergo construction. 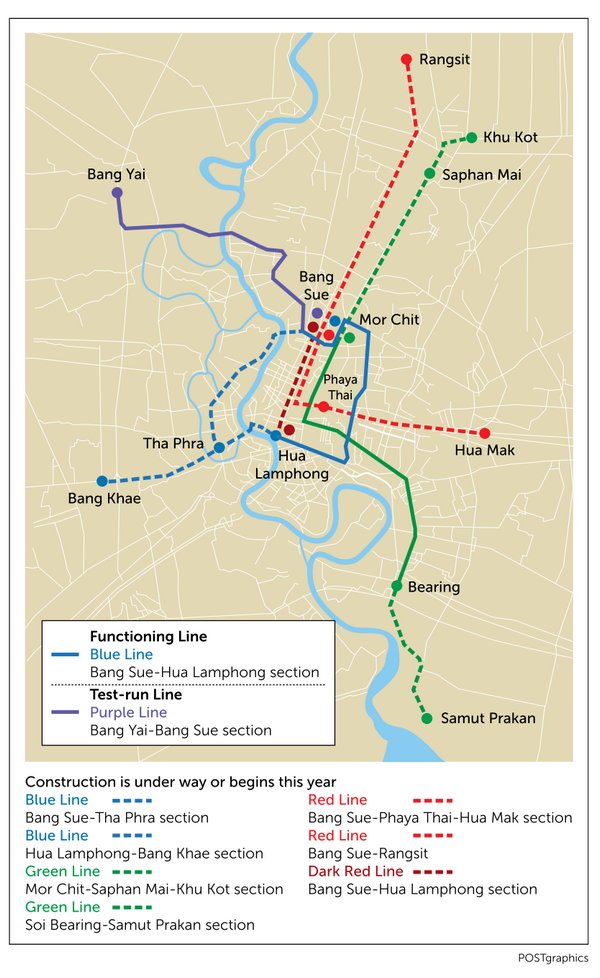 From 2020 onward, several lines will be launched and the railway links between Bangkok's suburbs and inner areas will start to take shape.

The city's train network envisaged by late former premier Samak Sundaravej will become a reality from that year, he said.

Two years after that, 10 electric train projects are due to be completed, which will form a transport web with more than 400km of railways, he said.

At that time, electric trains will serve as a key form of mass transport for people in the capital as the use of passenger vehicles dwindles, a pattern similar to other metropolises around the world.

Mr Chartchai said this can start with city buses. Their routes must be adjusted so commuters can connect with electric train stations, while common ticketing systems must be used to make switching between systems easier for people.