Dow, S&P end with losses for worst year since 2008
Business

Dow, S&P end with losses for worst year since 2008

NEW YORK - The Dow Jones Industrial Average and the S&P 500 racked up their worst annual performance in seven years after a selloff in the final Wall Street session of 2015 Thursday. 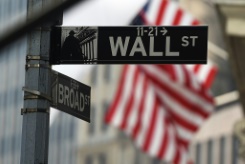 The Dow Jones Industrial Average and broad-based S&P 500 both fell at the start of trading on Wall Street.

Analysts said decline in Thursday's session should be taken with a grain of salt due to light trading volume and the incentive to sell stocks at the end of the year to book losses for tax purposes.

But the closing of the books on the worst year for the Dow and S&P 500 since 2008, after both repeatedly punch through record highs during the year, left a sense of an end to the seven-year bull run since the financial crisis.

Jack Ablin, chief investment officer at BMO Global Asset Management, said he was "hopeful" about 2016, but listed a litany of possible problems, ranging from low commodity prices to still-high equity valuations and the Federal Reserve's move to lift interest rates.

"There are risks out there and the problem is the market isn't cheap, so it's going to take bad news hard if we get it," he said.