Amlo secretary-general Seehanart Prayoonrat announced the decision Tuesday after a transaction committee considered a request by the Consumer Protection Police Division to freeze assets linked to the bankrupt fitness club for alleged money laundering and fraud.

Pol Col Seehanat accused the company of cheating its customers and failing to deliver services promised in its advertisements between 2000 and 2013 when it closed down many of its branches without refunding membership fees, including those for "lifetime" memberships.

"The examination of the company's financial transactions found they transferred 1.69 billion baht, or 99% of all transactional activities, to individuals both in Thailand and abroad from 2000-2011 while reporting operating losses." Pol Col Seehanat said.

The company also transferred the money to buy five parcels in Phangnga owned by Fitness Estate Co for which Cawow founder Eric Levine was named one of the board directors.

Later, the company's board directors were replaced and Latitude 43 Co was named as a major shareholder. Further investigations showed Mr Levine was actually the beneficiary of Latitude 43. 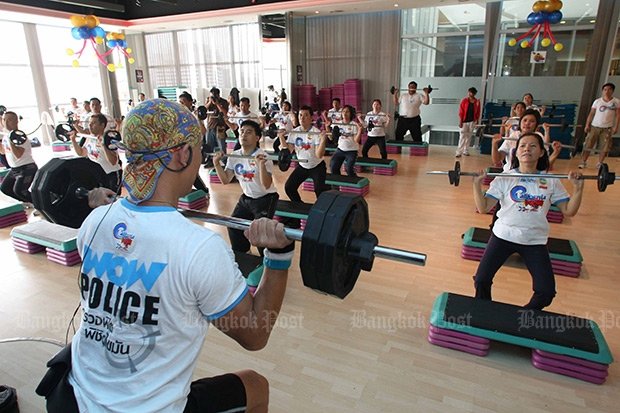 California Wow's fitness classes and claims it could make every one look like a celebrity brought massive complaints during its brief time in Bangkok. (File photo by Surapol Promsaka na Sakolnakorn)

Pol Col Seehanat previously said moving large amounts of money out of the country while the company reported losses showed that its executives had intentions of cheating customers since the beginning of its business operations.