The number of Chinese tourists visiting Thailand is tipped for 16% compound annual growth in the next five years despite the slowing economy in China, says brokerage house CLSA.

The sharp growth in China's outbound tourism is due to Chinese people's rising incomes and increasing desire to travel as restrictions such as visas are eased, said Aaron Fischer, CLSA's regional head of consumer and gaming research.

"Chinese people are getting richer and aspirations are rising for more adventurous and exotic locations, driven by social media influence," he said. 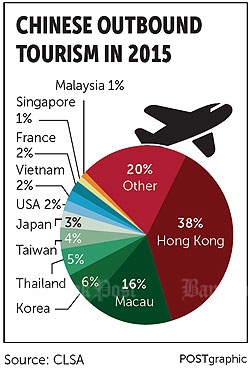 "The first step is to go to destinations in Asia."

The rise in Chinese travellers has driven growth in the Thai tourism industry for a few years.

In 2015, Thailand welcomed 8.3 million Chinese tourists, accounting for 36% of total arrivals. This year's forecast is for 8 million, according to the Tourism Authority of Thailand.

"We still maintain our forecast that Chinese outbound tourism will reach 200 million trips by 2020, representing 14% of global outbound," he said.

Chinese outbound tourism growth is expected to slow to 9% over the next five years from 17% in the past five. CLSA expects travel to Hong Kong and Macau to grow by 3% on average, whereas trips to other locations will grow by 16%.

The survey found the key risks to growth were safety, lower income growth and a weaker yuan.

Safety is always a significant concern for Chinese travellers, and 75% of survey participants confirmed it as the No.1 factor influencing choice of destination in 2015, an increase from 63% in 2014 and 41% in 2013.

"Apart from safety, the economic slowdown is a major concern for Chinese tourists as well because their economy is cooling down," Mr Fischer said.

Lower income growth in China in 2016 may hamper travel plans for Chinese, with 60% of respondents saying they would reduce outbound trips and 68% saying they would cut travel-related shopping if family income is lower than anticipated.

The weaker yuan will also affect travel plans, with 43% of respondents saying they might reduce the number of trips they take if the yuan depreciates by 10% this year. Some 35% said they would cut spending on shopping.

Only 14% said there would be no impact on travel plans.

According to the survey, the travel goals for Chinese tourists are experiencing foreign cultures, enjoying nice environments, relaxing and broadening horizons -- not shopping, which was long the top priority in the past.