Nature-oriented Chumphon is a province with much to offer the more adventuresome and outdoorsy traveller.

The Tourism Authority of Thailand (TAT) is using its Discover Thainess campaign to attract foreign tourists to "Hidden Gems" -- 12 provinces most people miss on their trips here.

The Bangkok Post has already looked at the tourism potential of eight of them. The ninth hidden gem is the southern province of Chumphon, 463 kilometres from Bangkok.

With a 222km coast and 44 islands, Chumphon has waterfalls, peaceful beaches, green forests, mangroves and rivers. Above all, the local residents are friendly and food prices reasonable. Chumphon is like a beautiful girl without make-up.

Locals and their traditional way of life are a big draw. A total of 16 communities have set about promoting their home as a tourist attraction. They want to generate more income for their families and share the fishing and farming culture with city people.

Koh Phithak, in the Gulf of Thailand, spans 712 rai with 42 households. Most villagers are fishermen and farmers, and their additional task is running the Koh Phithak Homestay.

Each year, Koh Phithak welcomes more than 100,000 visitors. The island boasts a good viewpoint on the cape where travellers can see Koh Tao, Koh Samui and Koh Phangan on a clear day.

There are several good diving sites nearby. Among them are Koh Ngam Yai, Koh Ngam Noi and Koh Rang Ka Chiu, part of Mu Koh Chumphon National Park, which spans 317 square km and has a sea area of 165,969 rai. Marine life abounds, although it is not the most varied. 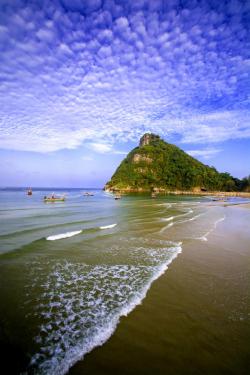 Koh Ngam Yai and Koh Ngam Noi are under concessions for bird's-nest collection, and tourists are prohibited from entering the islands.

Travel boats drop anchor at buoys in the sea, automatically limiting the number of travellers and protecting marine life.

Local diving companies in Chumphon have joined with tour agents in Ranong to forge ties between the Andaman Sea and the Gulf of Thailand.

Suvarin Mayazes, president of the Chumphon Tourism Business Association (CTBA), says the low season (May-November) in the Andaman Sea is the same as the high season in the Gulf of Thailand.

The diving tour business in Chumphon has boomed since the collaboration began.

The TAT is promoting one of the loveliest attractions in the South -- the coffee valley at Ban Panwal in Tha Sae district, spanning 178,283 rai of robusta coffee plantation and producing more than 24 million tonnes a year.

Apichai Aranyig, director of the TAT's Chumphon-Ranong office, bills the coffee valley as an attraction for adventure and those who love cycling. A sea of mist covers the valley in the morning, with temperatures falling to as low as seven degrees Celsius at the top.

Mr Apichai expects arrivals will grow by 17% this year.

Provincial officials set a 15-million-baht budget for installing CCTV cameras in the municipal area and at tourist attractions. An additional 100 million baht will go to building 10 roads, lights and signage for better access to tourist attractions.

Mr Somdee says locals have relied on agriculture and monocropping. Most have seen their earnings drop with the falling prices of rubber and palm oil. Rubber prices have fallen nearly 70% since 2011. With that in mind, the province is seeking to boost community-based tourism and alleviate the poverty of locals.

The province has launched a campaign to nudge farmers towards hot-season fruits such as durian, mangosteen and bananas.

The CTBA says while most of Chumphon's budget has been used to build infrastructure, the province has failed to follow through with efficient project management after completion.

Mr Suvarin says Chumphon functions mainly as a stopover for tourists en route to Koh Tao, as the province has no attractive tourism magnets.

"All parties must share the same concept and develop tourism together," he says, adding that tourism operators should upgrade their products and services to international standards.

A lack of flights is another obstacle. Nok Air offers two flights a day, and its fares are three times higher on average than tickets to Phuket and Krabi, with most flights fully booked.

Consequently, most travellers fly to Surat Thani airport instead.

Chumphon's physical charms have yet to translate into suitable tourism infrastructure, Mr Apichai says. There are only two four-star hotels, making it difficult to capture high-end tourists. 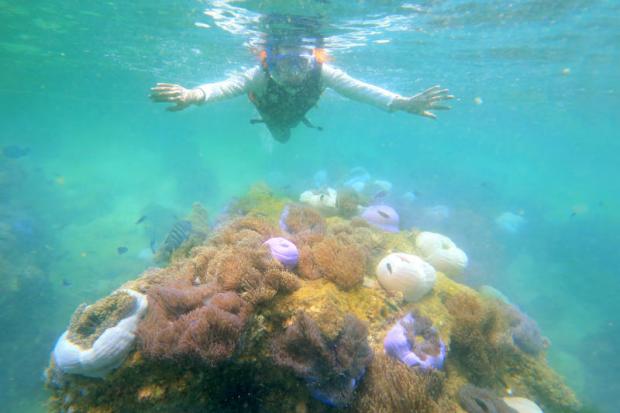 Beautiful coral under the sea in the Gulf of Thailand.