Crew members working on the set of the shooting of a sequence of an advert for a Thai bank promoting a scholarship fund in November. (AFP photo)

Feverishly jotting down ideas in a funky glass-panelled conference room, Thailand's “Mad Men" are doing what they do best -- creating tearjerker adverts that leave viewers scrambling for the tissue box.

So-called "sadvertising" has exploded around the world in recent years as brands jostle to engage customers and stand out from competitors.

An annual nostalgia-tinged Christmas commercial from retailer John Lewis has become a festive tradition in Britain, while Budweiser's Lost Dog pulled heart strings and swept advertising awards in the US.

But few places are doing it with such devastating efficacy as the Thais, where the adverts are often as gruelling as they are memorable.

To outsiders Thailand advertises itself as the Land of Smiles, but it's more emotionally complex than that. The Thai language has more than one hundred phrases that use the word heart -- jai -- to discuss a whole gamut of emotions, while its soap operas are renowned for their notoriously tragic storylines.

The same is true of adverts. One recent spot, for a lingerie brand, pivots on a woman diagnosed with cancer on the same day she discovers she is pregnant, leaving her with the heart-wrenching choice of risking the baby's life with chemotherapy, or her own.

Another, accompanied by the trademark soft piano music and a melancholic voiceover, is about a deaf and dumb father who saves his daughter with a blood transfusion after she attempts suicide.

The emotional punch packed by such adverts has flummoxed many international viewers, with videos of non-Thais trying not to weep through the adverts doing the rounds on YouTube.

"This is so horrible," exclaims one viewer under the name 'Deadlox' as he watches the advert featuring the girl who attempts suicide, which was commissioned by a life insurance company.

"Why would they do that?", he says of the filmmakers.

"Being a Buddhist is all about giving and caring. We tend to always have an emotional sympathy for people less fortunate than us," he tells AFP.

One of the company's recent commissions was from Khrung Thai Bank, a state-owned entity looking to promote its scholarship fund. After months of back and forth they settled on two lengthy internet spots.

One tells the tragic tale of a female student who learns to conquer her fear of the neighbourhood dog 'Olieng' after his elderly owner dies.

Girl and dog then become inseparable, until she returns from school one day to find it fatally injured by a car. Olieng eventually dies in her arms as memories of his happy life with the girl flash before his fading canine eyes. 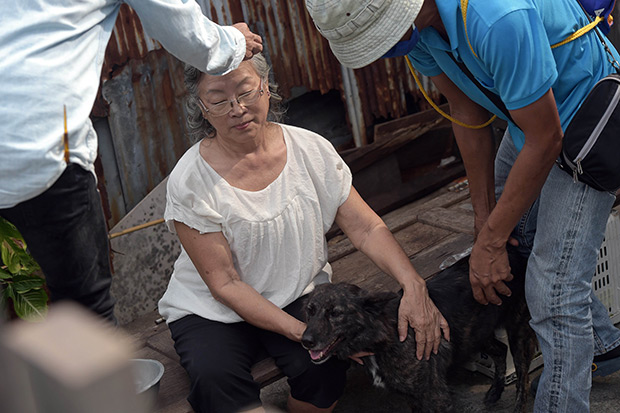 An actress (centre) gets ready for the shooting of a sequence of an advert for a Thai bank promoting a scholarship fund in November. (AFP photo)

The advert then skips to the present day where the girl has become a vet and is patching up another person's beloved pooch.

"While others were lost in life's bad moments," a voiceover states, "she recognises the good times are an inspiration to reach our dreams."

It's a formula that clearly works for the domestic market. Since its 11 January release the advert has racked up 12 million views and more than 350,000 shares on Facebook and 1.68 million views on YouTube.

But Phil Townsend, Asia-Pacific managing director of Unruly, which specialises in getting adverts to emotionally resonate with viewers, says creatives around the world are taking note of Thailand's tearful output.

"We get a lot of people asking us: 'How can we make videos like that?'," he says.

Ralph Brunner, chief marketing officer in Asia for insurance company MetLife has been making adverts across the region since the late 1990s.

"The Thais have a knack for emotional storytelling," he says. "You see it on TV, short films that either make you cry or a have a tremendous sense of humour and a very playful nature."

MetLife had one of the most successful emotional ads of 2015 with a spot about a father struggling to provide for his daughter. On YouTube alone it has been viewed over 11 million times.

Unlike humour, which is very specific to countries and even ages, parental struggles are something almost everyone understands, says Mr Brunner. "It's a universal theme people can relate to."

Dave McCaughan, a veteran of advertising who spent nearly three decades across Asia with McCann, believes the rise of the genre is linked to rapid economic and social changes -- and growing disquiet over what the future holds. 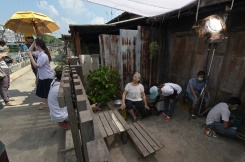 When he first arrived in Thailand in the economic boom years of the mid-1990s, many adverts employed slapstick comedy. More recently Thailand's economy has become known as sick man of Southeast Asia, following a decade of political turbulence. And the adverts have got sadder.

"There's a lot of disconnect and dysfunction going on -- and those ads play to old fashioned values," he says.

"What happens when you're feeling low, you go for the security blanket," he says. "It doesn't matter which culture you are, it's the same. And the big security blanket here is real emotions."