Migrant workers hold up their identity cards as authorities conduct a check at a port in Samut Songkhram province in this July file photo. Authorities have registered more than 70,000 previously undocumented foreign workers since a crackdown on illegal fishing began. (Reuters photo)

Authorities have registered more than 70,000 previously undocumented foreign workers in its fishing industry as the government tries to stave off a potentially ruinous European ban on its seafood exports.

In a briefing with foreign journalists on Thursday, navy, fisheries and labour officials insisted the clampdown on illegal, unregulated and unreported (IUU) fishing practices was yielding results.

"It's a national agenda, and the prime minister has stressed that he has zero tolerance on this issue," Foreign Ministry spokesman Sek Wannamethee said.

The government said Thursday that documenting foreign workers, many of whom illegally enter Thailand from Myanmar and Cambodia and are easily exploited, will help end a cycle of abuse. 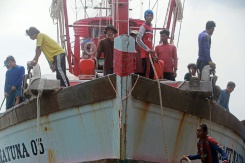 Migrant workers from Myanmar stand on a fishing boat as it arrives at the port in the southern city of Pattani on June 18, 2014. (AFP photo)

Of an estimated 200,000 undocumented foreigners working in the industry, 70,000 had now been registered, said Cmdr Piyanan Kawmanee, assistant spokesman of a Navy-led taskforce heading up the crackdown.

"Around 50,000 were working in (fish) processing plants, the rest on fishing vessels," he said.

Those who had been documented would be allowed to continue working for at least two years, officials said.

More than 8,000 fishing vessels have also had their registrations revoked in the last year, they added.

Thailand is under intense pressure to overhaul its lucrative fishing sector. Last spring the European Union hit the country with a "yellow card" warning, threatening to ban all seafood exports unless the government tackled rampant illegal fishing and labour abuses among its fleets.

EU officials visited the kingdom last month for an inspection to decide whether a ban goes ahead, a move that could cost Thailand up to 36 billion baht in lost revenue.

Thailand is the world's third largest exporter of seafood -- a status that rights groups say is achieved through illegal overfishing and a reliance on low-paid trafficked workers from neighbouring countries.

The government claims successive civilian governments failed to tackle systemic problems within key industries like fishing and aviation -- another sector that is facing the threat of international regulatory sanctions.

"During civilian administrations... sometimes we couldn't enforce efficiently," said Vice Adm Jumpol Lumpiganon, who added that the EU's yellow card warning and the military regime's rise to power had become a "catalyst" to push reforms.

Officials said they did not know when the EU would make its decision but they were hopeful Thailand could avoid any sanctions.

"We are confident that thanks to the laws and regulations passed last year we have the tools to ensure that no underage or forced labour will occur in our processing factories as well as fishing vessels," said Arrug Phrommanee, director-general of the Ministry of Labour.