Harley Davidson's head man in Asia revs up the legendary brand to serve a new generation of enthusiasts.

Marc McAllister started dreaming of Harley-Davidson when he was just seven years old.

"My mother put a poster of the film Easy Rider (the 1969 American road movie featuring the big bikes) in my room. And I've been dreaming of riding Harley-Davidsons ever since," recalls Mr McAllister, now vice-president and managing director for Asia Pacific of the iconic American motorcycle manufacturer.

"In my early 20s, I started riding motorcycles including Harley-Davidson. My first holiday with a Harley-Davidson was when I was 25 and I have no idea how many I've owned since then. I love it. I do ride a lot and my wife also rides, so it's a family thing."

Now 46, Mr McAllister has a full-time job sharing his personal interest with enthusiasts in the Asia Pacific region where rising incomes have spurred the growth of the big-bike market in recent years, outpacing the expansion in other regions.

Asia Pacific generates around 11% of Harley-Davidson's sales globally. In 2015, the region posted its best year ever with dealer sales rising 7.3% to 32,258 units, versus a drop of 4.5% in Europe, the Middle East and Africa (EMEA) and 1.7% in its home US market. Sales in Latin America and Canada also decreased last year, pushing worldwide sales down 1.3% to 264,627 units.

Asia's growing middle class is playing a big part in driving motorcycle sales in this region while other markets are all experiencing a decline amid a weak economy, according to Mr McAllister.

"Most people in Asia, particularly in Asean, grow up on motorcycles. They are familiar with them and they like the experience," he said, while acknowledging that the big-bike market is slightly different than the one for the region's ubiquitous 150cc runabouts.

"Motorcycling is everywhere in Asia Pacific but the big bike-market -- the 600cc-plus units -- has been growing rapidly and it is a completely different style of motorcycling. It's about sport and leisure activity more than commuting or agricultural use. This is something that we really focus on and of course it's the same thing our competitors continue to develop. 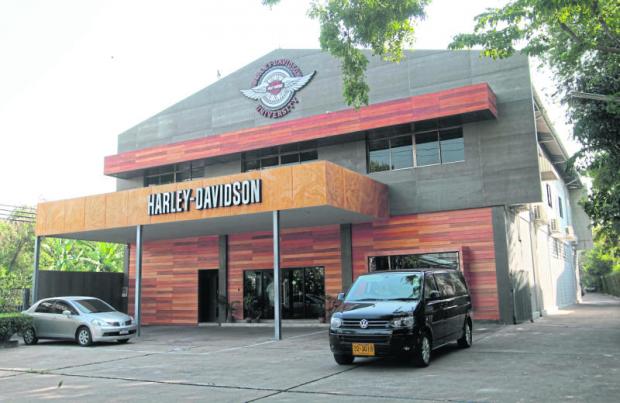 Harley-Davidson University Asia Pacific, which opened on Rama III Road in Bangkok last month, will serve as a training centre for staff of 232 Asia Pacific outlets, offering technical and commercial classes in multiple languages for about 800 people a year.

"When you achieve a position in life where you can have a leisure activity like motorcycling, you will look for the brand that can give you a great experience. That's why we attract a lot of people. When they want to express themselves, their dream or personal freedom, they think of Harley-Davidson."

Established in Milwaukee, Wisconsin in 1903, Harley-Davidson first shipped motorcycles to Asia Pacific in 1912, starting with Japan. It established its Asia Pacific headquarters in Singapore in 2011 and in recent years has been introducing models that are more affordable for Asian customers and appeal to young, urban riders.

The bikes are slimmer than traditional Harley models to make riding in dense, urban areas more pleasurable. As well, the seats are lower, based on consumer research conducted among thousands of motorcyclists in Asia.

"Traditionally, Japan and Australia are the big markets for us and continue to be successful markets," said Mr McAllister. "But the majority of growth for Harley-Davidson is now coming from mainland Asia, including Asean, China and India." 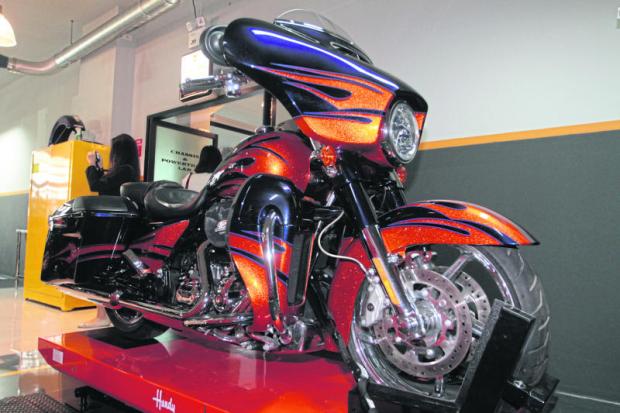 The company assembles vehicles in India for export to markets all over the world except for the United States. It also has offices in Tokyo, Singapore, Shanghai, Sydney and Delhi.

"India represents a great opportunity geographically for us and the Indian motorcycle market is the biggest in the world," he said. "We can also export from there to serve our customers in Europe and Asia Pacific. We have invested there for the future."

The 3750 model that was built in India accounts for a large part of Harley-Davidson's growing business in Asia Pacific. But imported US-made bikes still account for the lion's share of all products sold across Asia Pacific and will continue for the foreseeable future, he said.

At present, Harley-Davidson has 232 dealers in Asia Pacific, out of 1,400 globally. It aims to expand the global dealer network by between 100 and 150 in the next five years, of which the majority will be in Asia Pacific, said Mr McAllister.

The company last month opened its Harley-Davidson University Asia Pacific on Rama III Road in Bangkok as a training centre for staff of its regional dealers.

"We expect the growth will continue in this market. To reach the target, we need to invest in training our dealers and so Harley-Davidson University Asia Pacific has been established." said Mr McAllister.

The 1,500-square-metre Thai facility will offer technical and commercial classes in multiple languages for about 800 people a year. The only facility comparable to it today is Harley-Davidson University at its home base in Milwaukee, though the company also has training facilities in the region in Japan, Australia and India. 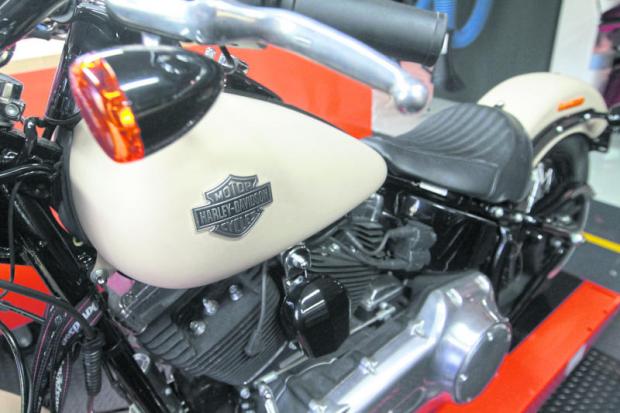 "Geographically, Thailand is in the centre of the region. Want all the staff flying here from all over the region to be trained," he said, adding that Board of Investment incentives and extensive air services operated through Thailand made Bangkok the ideal location for a regional training centre.

As orders from larger markets are slowing down, Harley-Davidson and its main big-bike rivals are all vying for a share in Asia. Italy's Ducati, Japan's Kawasaki and Austria's KTM are among the motorbike makers looking to build a new axis of growth in the Asean market of more than 600 million people.

But Mr McAllister is comfortable with the competition, saying that every brand is encouraging customers to ride motorcycles, thus enlarging the market for Harley-Davidson. 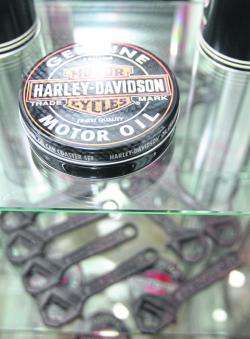 Instead, he sees the current major challenges to the motorcycle business in Asia Pacific as inconsistency in licensing laws and different import requirements around the region.

"As we are working our way through the Asean agreements, those are probably the biggest two hurdles apart from local issues in each market that we're going into," said Mr McAllister, who is currently based in Singapore.

While the company projects sales growth will continue in Asia, it is concerned about what is happening in China, where Harley-Davidson has 19 authorised dealers.

"At this point we're still working through what the total impact is," he said. "So far we've not seen a major slowdown yet. We continue to do quite well across Asia Pacific.

"We're still watching how what is happening in China would impact the whole region as China is everyone's largest trading partner. India is slightly different but of course we are keeping a close eye on it also."

As the vice-president and managing director for Asia Pacific, Mr McAllister leads a regional team focused on building the brand, increasing sales, and delivering the unique experience of the American iconic motorbikes to customers.

Prior to his current position, he was senior director in charge of planning, distribution and delivery of motorcycles, accessories and general merchandise for the company's dealer network worldwide. He also oversaw the introduction of an enterprise resource planning system across the sales organisation.

Starting his Harley-Davidson career in 1995 as a design engineer, Mr McAllister spent six years in engineering before moving to the European Supplier Liaison unit in the United Kingdom. In 2004, he joined the sales side and held various roles in Europe and the Middle East.

When he has free time, Mr McAllister loves to travel and visits many countries and cities around the world -- on two wheels of course. Currently, he has four Harleys including an Ultra Limited.

"I ride it on every continent except Africa. I enjoy riding all over the world meeting customers," he says. His dream ride is to go from Beijing to Lhasa.

"All of my children have a ride on the bike with me. Aged 12, 9 and 7, they all have experienced motorcycling. I think my youngest isn't quite sure yet but the other two really enjoy it," he says with a big smile. "And now, my son is dreaming of the day that he can have his own bike." 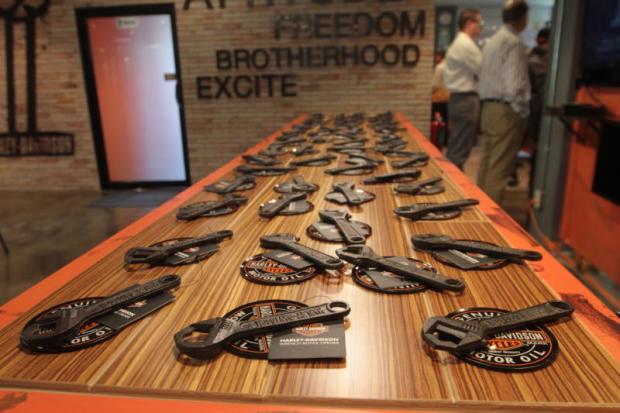 In a previous interview, Mr McAllister noted that Asia was perfect for biking with the combination of cities, well-developed highways and flat countryside.

"Riding a Harley isn't about speed, it's about the feel of the ride, and that's something you can really experience in this part of the world," he said.

And to be successful in the Asian market, Harley-Davidson has more to offer to customers, in his view.

"What we focus on is more than offering the motorcycle. It is a sort of lifestyle as we have lines of accessories and clothing. So the bikers will get the total experience," he told Asia Focus. "The real Harley-Davidson is about lifestyle."