Two giant Thai companies remain committed to expansion in Asean but favour a cautious approach in a slow economy. By Nareerat Wiriyapong

Full-steam regional integration under the Asean Economic Community (AEC) is offering new opportunities for Southeast Asian companies to expand across borders. However, the global economic slowdown and a plunge in oil prices have given rise to new uncertainties and prompted some companies to reconsider the timing of new projects abroad.

A recent example was the postponement by Central Pattana Plc (CPN), Thailand's largest retail property developer, of a mall in Malaysia from next year to October 2018 given that country's weak economic conditions. The 7.4-billion-baht project, CPN's first venture into Asean, was originally planned to open this year.

Meanwhile, Siam Cement Group (SCG) says its planned petrochemical complex in Vietnam would be further postponed by six months, pending the conclusion of an agreement with a new joint-venture partner following the exit of Qatar Petroleum International (QPI). The US$4.5-billion fully integrated complex is to be the first of its kind in Vietnam and a key regional flagship for the Thai conglomerate.

Some observers wonder whether the extra-cautious approach by both companies could lessen their opportunities to benefit from regional integration.

"Of course, expanding to markets where companies have had no presence before is risky but it gives them the opportunity to grow beyond their home turf," said Suttatip Perasub, a senior analyst at Maybank Kim Eng (MBKET).

"This is CPN's first project overseas so they are pretty cautious in developing it in order to ensure its success."

Apart from economic conditions, strict rules and regulations could be other reasons CPN thought it needed more time before launching its Malaysian mall, she added.

CPN holds a 60% stake of the project, a joint venture with the Malaysian partner I-City Properties Sdn Bhd (ICP), which would be located in Shah Alam, the capital city of Selangor, 22 kilometres from Kuala Lumpur.

"Retail competition in Selangor is not as fierce as in Kuala Lumpur. I think that's why the company views that it should not rush into it when the economic conditions are not favourable," Ms Suttatip noted.

The Malaysian mall is one of 15 new malls -- 12 in Thailand and three abroad -- that CPN plans over the next five years. The other two overseas projects under study are in Vietnam and Indonesia after the Thai developer cancelled its plan to open a mall in China.

For Siam Cement, the massive size of the Vietnamese complex dictates that it would be better to wait until every major component is in place, said chief financial officer Chaovalit Ekkabut.

SCG is now being in talks with a number of potential new partners who are keen to jointly invest, he added.

"We think we are still in the timeline to complete everything in six months so that the project would go ahead and be completed as planned," said Mr Chaovalit, noting that the focus was on the long-term potential of petrochemical demand in Vietnam rather than the normal cycles of the global petrochemical business.

To be developed on Long Son Island in southern Ba Ria Vung Tau province, the complex will consist of a factory capable of turning out 1.65 million tonnes of olefins, 1.45 million tonnes of polyolefins, 280,000 tonnes of chlor-alkali, and other materials each year. The site will also include support facilities, including a port, warehouses and a power plant.

SCG holds 46% in the Long Son Petrochemicals Project, in which QPI previously had a 25% stake. The remaining 29% belongs to two Vietnamese partners -- PetroVietnam and Vinachem.

The Qatari partner has maintained raw material supply contracts for the complex which was granted an investment licence in 2008. Prior to the latest delay, it was projected to come onstream in 2018.

"Demand growth for olefins in Vietnam is substantial while the supply is quite limited. This is the long-term potential of the project that we have focused on rather than the short-term business cycle," Mr Chaovalit told Asia Focus. 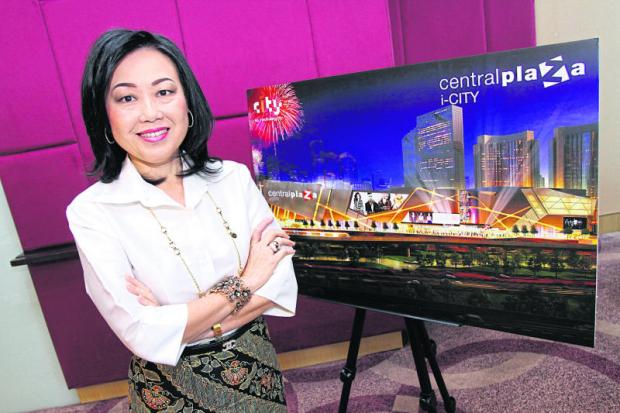 Wallaya Chirathivat, senior executive vice-president of CPN, shows off a sketch of the planned CentralPlaza i-City in Selangor state in Malaysia.

SCG has a five-year capital expenditure budget of between 200 billion and 250 billion baht between 2016 and 2020 for projects in Thailand and abroad. As of last year, 108 billion baht or 21% of the group's total assets were in Asean.

Now scheduled to start production in 2019, the Vietnamese complex "would suffer" from an unfavourable business cycle during the initial years of operation when new supplies of olefins are projected to enter the market.

"If the project was in operation now as originally planned, it would enjoy high margins on petrochemical products, especially olefins which are in tight supply for the time being," Mr Chaipat told Asia Focus.

Nat Panassutrakorn, an analyst with KGI Securities, agreed, saying that the petrochemical industry was expected to flourish over the next two years as some planned projects in the Middle East have been postponed. At the same time, petrochemical demand continues to expand by 4-5% annually.

"Besides, the appreciating US dollar has helped offset the impact of falling product prices and thus boosted profit margins of petrochemical businesses," Mr Nat wrote in a recent report.

"This is clearly the way SCG is doing business. If there are any uncertainties, they will not go ahead with the project. But given the project's location and its ability to use either gas or naphtha as a feedstock, I think the impact will not be significant," he told Asia Focus.

Maybank Kim Eng estimates that the spread between HDPE (high-density polyethylene) and naphtha will be quite high at around $700 per tonne this year. Despite a drop from the average of $747 in 2015, SCG's petrochemical business will enjoy a lower feedstock cost as naphtha prices have also fallen in line with the global oil prices.

Vietnam over the past decade attracted huge attention from foreign investors seeking to be part of the petrochemical industry there. The Hanoi government's development strategy for the oil industry calls for five petrochemical complexes by 2020, including the SCG-led Long Son site.

Apart from generous incentives, Vietnam holds great potential for the petrochemical industry, thanks partly to a long coastline that makes exporting convenient. The country's increasing integration with the global market through free-trade agreements (FTAs) including the Trans Pacific Partnership (TPP) has allowed Vietnamese products to become more competitive internationally.

"It is obvious that Vietnam has great potential for the petrochemical industry, which is becoming lucrative for foreign investors. However, it is worth noting that it is not easy to enter the market as licensing will take years and strategic cooperation with state-owned PetroVietnam is required," wrote Business Development Group (BDG) Vietnam.

Saudi Basic Industries Corp (Sabic), one of the world's largest petrochemical companies, has mentioned that Vietnam is among countries it is looking to expand into, together with Indonesia and Malaysia where it is looking to switch from being a seller of petrochemicals in the region to a manufacturer.

For retailers and shopping mall developers such as CPN, meanwhile, economic conditions both at home and abroad need to be closely watched. CPN currently operates 29 Central shopping complexes in Thailand, 13 of them in Bangkok. It has budgeted 46.14 billion baht to expand its shopping complexes from 2016-18.

By spending about 14-15 billion baht in each of the next five years, CPN aims to increase its revenue by 15% annually. But uncertainties have arisen because apart from the project in Malaysia, CPN has also postponed the opening of a mall in Nakhon Ratchasima further from next year to late 2018.

"CPN's expansion plan is more aggressive than our expectations," Chalinee Conmuang, an analyst with Deutsche Tisco Investment, wrote in a recent research paper.

"Though there is a delay in mall expansion this year, with just one project opening instead of two as we previously expected, the company's overall plan to add 15 new shopping complexes over the next five years is more ambitious than our forecast of eight malls opening including one in Malaysia," added Ms Chalinee.

Wallaya Chirathivat, CPN's senior executive vice-president, said that to be successful in expanding abroad, a local partner with complementary expertise is very important for the company to develop the right products and services for each market.

"We were convinced that the time had come for us to expand our business to the international market in order to achieve CPN's goal of being a retail property developer on a regional scale," she said. "Malaysia presents a recognised and conducive environment for our international expansion."

According to Euromonitor International, retailing in Malaysia is mainly driven by young consumers. Nevertheless, the declining value of the ringgit relative to other major currencies and the introduction of a 6% goods and services tax (GST) served to dampen retail sales growth in 2015.

International retailers were aggressive last year in terms of expanding their outlet networks. Domestic retailers, meanwhile, were cautious about expanding in urban areas, due to many challenges, such as a lack of capital, high rental rates, a shortage of manpower, and rising crime rates in certain locations.

"The government is taking measures to address the economic situation in the country. As a consequence, inflation is expected to rise moderately, thereby allowing most retailers to control their costs and shift the focus to growing their businesses, which will be beneficial to the growth of retailing," Euromonitor analysts wrote.

"In addition, the 6% GST is slowly coming to be accepted by consumers, whereas, immediately following its introduction, consumers were frustrated and reacted by reducing expenditure."