SHANGHAI - China's central bank on Monday cut the proportion of funds banks must set aside as reserves, in Beijing's latest attempt to tackle slowing growth in the world's second largest economy. 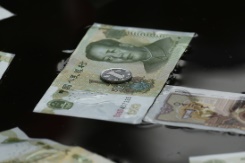 China's central bank cuts the proportion of funds banks must set aside as reserves.

The People's Bank of China (PBoC) said in a statement it would trim the so-called "reserve requirement ratio" (RRR) for financial institutions by 0.50 percentage points, freeing up more funds for them to lend.

The move came immediately after a G20 finance ministers' meeting in Shanghai, which stressed the use of all available policy tools to boost global growth, and with Chinese and world stock markets assailed by worries over the economy.

"The move underscores a message that officials have repeated in recent days, including at the G20 meeting: policymakers still have room to support the economy," chief China economist at Capital Economics, Mark Williams, said in a research note.

The decision also came ahead of the opening this weekend of the annual session of the National People's Congress (NPC), China's rubber stamp parliament, which will unveil economic targets for 2016 and a five-year development plan.

China's economy grew an annual 6.9% last year -- the lowest in a quarter of a century -- and analysts forecast it to slow further this year.

The RRR cut, which was expected by economists, is the first across-the-board reserve ratio cut since October last year, when the central bank also lowered it by the same margin.

The latest move lowers the reserve ratio to 17% for major banks, analysts said.

Analysts anticipate Chinese Premier Li Keqiang will declare a lower growth target at the NPC meeting, likely a range of 6.5 to 7.0% from the previous target of around 7.0%.

The PBoC said in a statement on its website the RRR move aimed at maintaining liquidity and guiding the steady growth of money and credit.

"The central bank wants to make up for a shortage of liquidity... to stabilise the economy," Chen Ji, a senior analyst at the Bank of Communications in Shanghai, told AFP.

On Friday, on the sidelines of the G20 ministers meeting, PBoC chief Zhou Xiaochuan said China could still use monetary tools to help boost its slowing economy.

The central bank has already slashed interest rates six times since late 2014 and lowered the RRR several times, as well as injecting massive amounts of funds through open market operations.

Before the announcement of the RRR cut, the central bank pumped 230 billion yuan ($35 billion) into the financial system Monday to ease tight liquidity, bringing total fund injections over the past week to more than 1 trillion yuan, according to state media.

Liquidity has tightened as the central bank buys yuan to support the currency -- also known as the renminbi -- which has weakened on worries over the slowing growth.

"The PBoC of course has been intervening in the market to support the renminbi and so that withdraws liquidity. And the reserve requirement cuts are necessary to offset that effect," Klaus Baader, head of research for Asia and chief economist for Asia-Pacific of Societe Generale, told AFP.