Noble to launch 4 projects worth B12bn

SET-listed Noble Development Plc plans to launch four new projects worth a combined 12 billion baht, aiming for 7 billion baht in presales by the end of the year.

The company will have sales roadshows in Myanmar, Laos and Cambodia to tap demand for Bangkok condominiums. 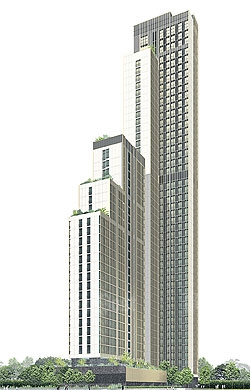 Luxury condominium, Noble BE19 , is among new projects to be launched by Noble Development Plc this year.

"Bangkok condos in the luxury segment are attractive to foreign buyers as prices remain lower than in nearby countries while Thailand is a hub for medical and health tourism," said chief executive Kitti Thanakitamnuay.

According to property consultants Colliers International Thailand and Knight Frank Chartered (Thailand), the average selling price of a luxury condo in Bangkok was US$7,015 per square metre, compared with $15,551 in Singapore, $30,218 in Hong Kong, $15,013 in Taipei and $13,480 in Shanghai.

In 2014, Bumrungrad International Hospital reported it treated over 516,000 international medical episodes from over 200 countries. The top-three highest revenue contributors were Myanmar, the United Arab Emirates and Oman.

"Despite the volatile economy worldwide, neighbouring countries have experienced strong growth with an average GDP of 7.3% during 2010-14, led by Myanmar," he said.

In order to tap buyers from abroad, Noble will launch Noble BE19, worth 5.9 billion baht, which will be located on a 3.5-rai site on Sukhumvit Soi 19, one station away from Bumrungrad.

It will launch one condo project in the first half and two in the second half with unit prices of more than 200,000 baht per sq m and aims to have presales of 7 billion baht by the end of the year, up from 2.6 billion baht in 2015.

"The global economy is unpredictable this year and next," said Mr Kitti. "Despite these circumstances, we are confident about strong domestic consumption and growth in the real estate sector."

NOBLE shares closed yesterday on the Stock Exchange of Thailand at 11.70 baht, unchanged, in trade worth 3.3 million baht.