Thailand's foreign direct investment (FDI) this year should experience solid improvement with the launch of the government's 10 industrial clusters and the integration of the Asean Economic Community.

"After the government imposed a series of stimulus packages and new policies targeted at  Thailand's economic recovery amid the fluctuations of the global economy, its efforts have started to improve the situation," said CLSA Securities' country head Prinn Panitchpakdi.

Mr Prinn said FDI would turn around by year-end and the momentum would continue through 2017. 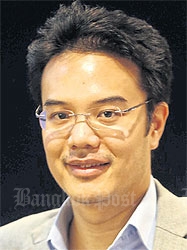 In 2015, the Board of Investment approved applications worth 800 billion baht, well below the target of 1.4 trillion but still higher than the 725 billion in 2014, after the government changed the regulations on granting privileges to insist on value-added investment instead of merely large budgets.

Japanese investors still rank No.1 in terms of investment value with 30 billion baht, while the Chinese rank second with 20 billion and Singaporeans third with 18 billion.

"In August, we also had the first reshuffle of the government with five new ministers at the major economic ministries. We had another disruption at that point as people wanted to wait and see what the differences would be," said Mr Prinn.

Mr Prinn said the new economic team had implemented policies directly promoting strategic industries such as the automotive sector for the country's development. Along with the huge infrastructure projects, these industries would be crucial magnets to attract FDI.

Thailand's minimum daily wage and the salary base of its skilled workers remain cheaper than those in Malaysia or even China, so multinational companies still consider Thailand a major destination.

"FDI may not leap in the short term but in the longer term the impact of the policies will be huge, I believe, and they will attract a lot of capital investment from overseas similar to what happened with the Eastern Seaboard," said Mr Prinn.

"After nearly four decades, the Eastern Seaboard policy has been a major turning point for the country's economic development, which is why we are the hub of the auto industry."

However, Mr Prinn warned the government to be careful over its decision on whether to join the Trans-Pacific Partnership on concerns that Thailand may stand to lose in issues regarding intellectual property such as orchid breeds and drugs.

"If you look closely at each country's stance and moves, you will see them all move to protect their domestic industries even though they agreed to join the pact," he said.