Rice out, beans in as farmers go back to school
Business

Rice out, beans in as farmers go back to school

Farming ministry workers show an infographic illustrating cost comparisons of planting rice and planting vegetables at a government-funded training programme for rice farmers in Sankhaburi district of Chai Nat province Feb 23. The government is funding a training programme designed to wean farmers off water-intensive rice and teach them how to grow other crops. (Bloomberg photo)

Rice farmer Prapatpon Rungsatien perches on a plastic chair in a Chai Nat classroom. Ceiling fans stir the humid air as she and 49 of her neighbours hunker down for a talk on Southeast Asian economics.

Ms Prapatpon, 48, returned to school last month for a state-funded training programme designed to wean farmers off water-intensive rice and teach them how to grow other crops. With lessons spanning everything from accounting to chicken husbandry, the government is trying to reduce a record stockpile of the cereal at a time when farmers are facing the worst drought in two decades.

The government has advised farmers on producing alternatives to the crop for a decade. Now, in the face of diminishing water and plunging prices, it's getting more serious. A banner at the front of the classroom in a village in Sankhaburi district bears the logo of the National Council for Peace and Order. An adjacent sign featuring HM King Bhumibol Adulyadej's image says: "Use Water Wisely." Outside, an irrigation canal opposite the building is bone dry, like the surrounding farmland.

"With the problem of drought, these people are going to suffer," Finance Minister Apisak Tantivorawong said in an interview in Bangkok on Tuesday. "What we are trying to do is to inject some money into this sector -- try to help them, try to employ them -- teaching them how to survive in this difficult period."

The El Nino-induced drought will drain about 84 billion baht from the economy and sap demand for durable goods such as vehicles, electrical appliances and farm machinery, TMB Bank said in a Feb 19 report. Earnings have been crimped at companies from appliance-maker Singer Thailand Plc to pesticide distributor Pato Chemical Industry Plc. 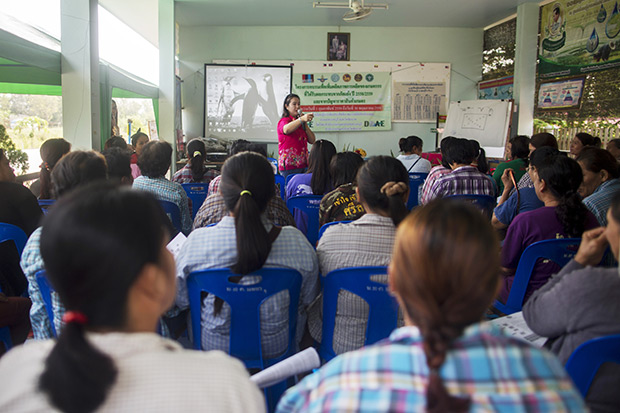 Agriculture accounts for 8% of Thailand's GDP, Apisak said. Farm output has contracted 7%-8% in each of the past two years and farmers' debt to agricultural income is hovering around 100%, said Santitarn Sathirathai, an economist with Credit Suisse Group AG in Singapore.

Going back to school was meant to give farmer ms Prapatpon fresh ideas and new strategies for survival on her farm in Chai Nat province. Instead, she said: "I can't apply any of this."

A fourth-generation rice farmer, she'd harvested three crops a year for 15 years until the drought began in late 2014. Her last harvest was a 10th of the usual yield and mostly eaten by rats. "I thought about growing green beans, but there's not even enough water for that," Ms Prapatpon said. "My land is dry and cracked. How can I grow anything? I can't even get water from the ground."

Ms Prapatpon's struggle exemplifies the difficulty finding viable solutions to drought, even after the military government approved 11.2 billion baht of measures last year to help farmers, including encouraging them to plant crops that need less water and giving them longer to repay loans. It budgets spending 10.1 billion baht in the year starting May 1 to stabilize prices and reeducate farmers, including producers of Thailand's famous fragrant jasmine rice.

Rice, a staple entrenched in Thai culture, is being targeted because flood-irrigated paddy uses a lot of water -- sometimes two-and-a-half times the amount needed to grow a crop of wheat or maize.

With the Bhumibol and Sirikit dams, the main water sources for the country's central plain, the lowest since 1994, the government wants to reduce the country's rice production to 27 million tonnes in the planting season starting May, a quarter less than the five-year average. 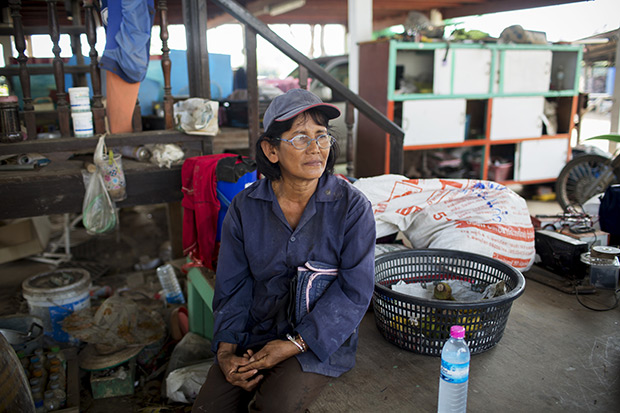 Farmer Payong Thongpan, unable to plant a rice crop since October due to drought and is living off borrowings, sits for a photograph in Sankhaburi district of Chai Nat province Feb 23. (Bloomberg photo)

For more than a decade, rice farmers were cushioned by subsidies. The support won rural votes for former prime ministers Thaksin Shinawatra and his sister Yingluck. It also led to a 20% jump in rice production and a record 17.8 million-tonne stockpile that the current government is struggling to sell.

Rice farmers have played a central role in Thailand's last decade of political unrest, turning out en mass to support the Shinawatra family, whose allied governments have twice been ousted in coups despite winning every national election since 2001.

Prime Minister Prayut Chan-o-cha has taken to the airwaves repeatedly to urge farmers to plant less rice. With maximum temperatures typically peaking in April and the monsoon not due for months, the government is luring farmers back to school to speed up change.

The government earmarked enough money for 250 farmers to attend 15 days of training over three months in Sankhaburi, a district with 8,000 farming families. Because there were four times as many applicants, participants -- who are paid 200 baht a day to attend -- were selected randomly in a lucky draw.

"We have a limited budget," Finance Minister Apisak said. "They need to help themselves as well. Not just survive on government money."

While some farmers are becoming frustrated with their economic situation, there isn't a lot they can do to express their feelings publicly under military rule, said David Streckfuss, a Thailand-based academic and the author of books on Thai law and politics.

"It doesn't seem like the economic welfare of labourers or small-scale farmers is a huge priority for the government," he said, adding that any political tension in rural areas isn't a current threat to security. "The effects of a diminishing economy is not something that is easily going to create a spark and set something off -- at least not yet. It's just a slow burn." 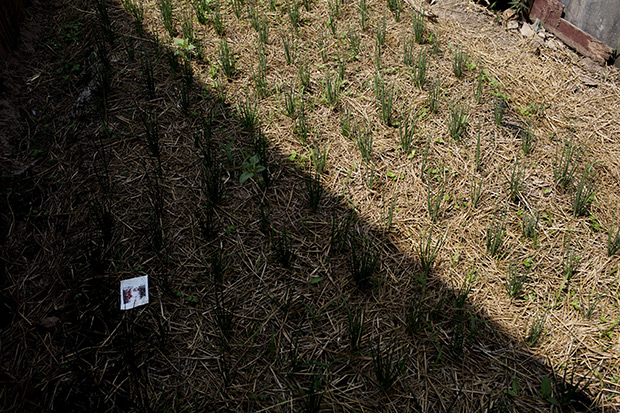 Vegetables grow in a field in the Sangkaburi district of Chai Nat province Feb 23. (Bloomberg photo)

For farmer-turned-student Chaiyapoj Phak-on, the past two years have been a harsh contrast to the heady days of the previous government's income-propping rice-buying programme, which he called "the best time of my life."

While he'd still prefer to grow rice, the 50-year-old said the government's training has offered him encouragement. "There are other ways to make a living," he said. "There is hope."