Exports down 20%, farmer debts pile up

A sugar cane worker poses while working in a field at tambon Pakchong in Ratchaburi province March 22. (Reuters photo)

RATCHABURI -- Prasert Jitkham stoops down and pulls a yellowed sugar cane shoot from baked soil. The worst drought in more than 20 years `has killed the plant he should harvest next year.

The El Nino weather phenomenon has played havoc with crops across Southeast Asia and beyond. Thailand, the world's second-largest sugar exporter, will ship 20% less of the sweetener to international markets this year than last, and farmers fear the damage already inflicted on young cane plants could make next year worse.

A drop in exports from Thailand and India has contributed to forecasts for a widening global supply deficit this year, fuelling a rally in international prices to a 17-month peak last week and helping sugar outperform a commodity complex struggling with the slump in global oil prices.

Sugarcane is seen after being harvested in a field at tambon Pakchong in Ratchaburi province March 22. (Reuters photo)

"It's dead," Mr Prasert said, pulling the dusty shoot apart. "Worms have eaten up all its roots. They're all starting to die. This is the worst I've seen it since I started growing sugar cane in 1979."

International prices may have rallied but farmers are reaping no benefits. Mr Prasert and other sugar farmers in this central province say they have lost 20%-30% of their output this year due to the drought.

As the drought takes its toll on the young cane, farmers, sugar mills and the government have soured on their outlook for next year's crop.

"Farmers can't grow cane," said Boonthin Kotsiri, production director at the Office of Cane and Sugar Board. "There's no water."

Some farmers have turned to cultivating tapioca, he added, because it needs less water and generates similar income. 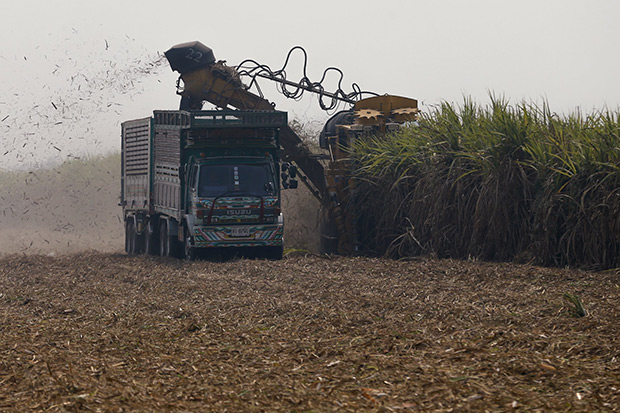 A truck and a tractor harvest sugar cane in a field in Ratchaburi province March 22. (Reuters photo)

Thailand, which typically exports about three quarters of its sugar output, will ship out about 7.1 million tonnes in 2015-16, down from 8.9 million tonnes a year ago.

Sugar has rebounded from seven-year lows touched last August on concerns over supply from Asia, and similar Thai export volumes next year may prolong the tighter outlook for global fundamentals.

With cane output down, sugar mills and refineries are operating well below capacity.

Banpong sugar mill, a mid-sized plant in Ratchaburi, will run for only 90 days, 25% below its capacity 120 days, said manager Prasong Ruenthong. The plant can process 14,000 tonnes of cane per day.

"It is very worrying," he said, blaming El Nino as brightly painted trucks deliver the last of this year's cane crop to the refinery. "It hasn't rained in six months and the new canes are dying."

The drought was so bad that even irrigated fields could soon face problems as water levels were so low in canals and reservoirs, he said.

As farmers get a lower yield from a smaller crop, more of them are getting into debt. 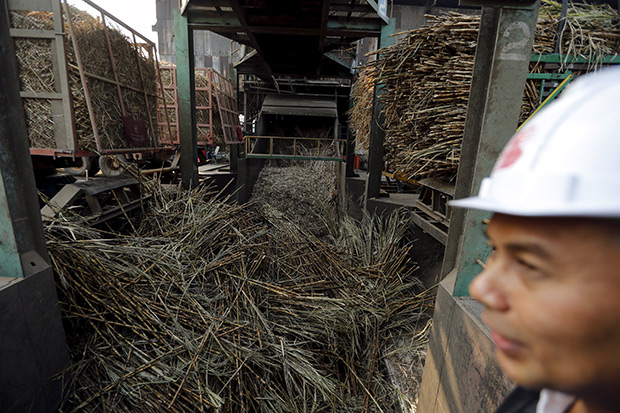 Of 400 farmers that sell their harvest to Mr Prasong's refinery, 30 have for the first time failed to repay loans administered by the refinery for the crop year.

They are part of a growing number of rural Thais struggling with debt. Most are rice farmers, who were hit hard when the military seized power in 2014 and ended generous subsidies.

The irony for some in Ratchaburi is that they have taken a double hit: They were encouraged to convert to sugar from rice as the government sought to cut subsidy reliance and reduce massive rice stocks.

For the first time in 50 years of growing cane, farmer Hant Krataithong said he could not repay debt this year with income from his harvest. He spent a lot of cash on fertilisers to compensate for the drought.

"I am in debt. But I have to keep going," he said, sitting on the porch of his house. "In previous years I could pay off my debt but this year I couldn't. It's worse than before."