Renewable energy sources are gaining ground in Asia but making much more efficient use of conventional sources remains an important priority.

A rooftop solar installation developed by Thai Solar Energy Plc is one of many that are gaining popularity in Thailand as panel costs decline and incentives improve.

Growing awareness of the impact of air pollution and global warming have been driving more investments in energy from renewable sources and moving green energy to the top of many government policy agendas.

In Southeast Asia, finding the right energy mix is a major challenge as countries strive to ensure that economic growth and environmental protection are compatible.

"The challenge faced by developing countries is balancing the cost of electricity and conservation of the environment," Dr Maximus Johnity Ongkili, Minister of Energy, Green Technology and Water of Malaysia, said at Sustainable Energy & Technology Asia (SETA) 2016 held in Bangkok late last month.

Malaysia is studying eco-friendly technologies such as carbon capture and storage (CCS) and integrated gasification combined cycle (IGCC) power to address the challenge, he added.

CCS is the process of capturing waste carbon dioxide (CO2) from large sources, such as power plants, and depositing it at a storage site where it will not enter the atmosphere, normally underground. IGCC uses a high-pressure gasifier to turn coal and other carbon based fuels into pressurised gas. It then removes impurities from the gas so that it can be used to generate power, and can turn the pollutants, such as sulphur, into reusable byproducts.

Unlike other Asean countries, Laos uses hydroelectricity as its main source of power. As the aspiring "Battery of Asia", Laos has total hydropower potential estimated at 26,000 megawatts (MW).

"We are committed to fully developing this potential as a catalyst for socio-economic advancement that can lift the Lao people out of poverty and help millions of others in less developed countries in Asia," said Mr Viraphonh.

While Laos is fortunate to have an electricity surplus, he urged regional policymakers to speed up work on the Asean Power Grid -- the interconnection of physical infrastructure to ensure regional energy security, along with improved efficiency and resource sharing.

"We believe that the power trade will be crucial for Asean in the future. Together we can improve efficiency that will match supply with seasonal demand, while expanding markets and reducing costs to consumers," Mr Viraphonh said.

For instance, power trade between state-owned Electricite du Laos (EDL) and the Electricity Generating Authority of Thailand (Egat) has quadrupled since 1993. New hydropower generation in Laos -- including the 1,285 MW Xayaburi run-of-river dam developed by Thailand-based Ch. Karnchang, will bring the total to 7,220 MW by 2020.

"Imports from Laos will help Thailand meet its targets for renewables, with fewer subsidies and fewer carbon emissions," he added. 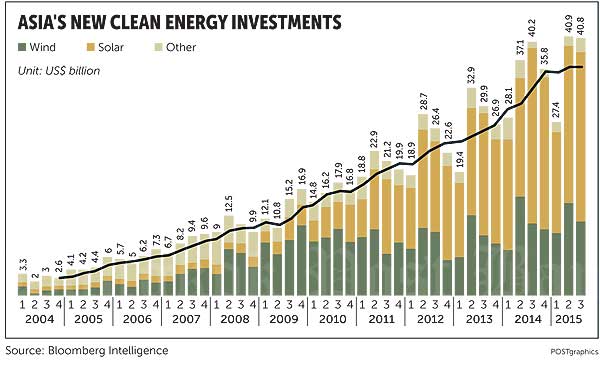 According to Bloomberg Intelligence (BI), clean energy growth in Asia has outpaced that of other regions, even though environmental concerns rarely appear to be at the top of the region's agenda. China leads the advance, driven by attempts to curb hazardous and unsightly pollution rather than worries about climate change, with Japan and Thailand also making major strides.

Asia's investments in clean energy, which sharply cuts CO2 emissions compared with coal, oil and other fossil fuels, have surged since 2005. As much as US$41 billion was spent in Asia each quarter on clean energy, compared to below $20 billion in 2010 and less than $4 billion in 2005, according to Bloomberg New Energy Finance.

Based on government forecasts, wind power should more than double from 2015 levels to between 200 and 250 gigawatts (GW) by 2020, while solar capacity will triple to at least 100 GW, said the report.

Southeast Asia, meanwhile, may expand its renewable energy industry a faster rate than any market in Asia except China. Renewable-power generation will grow at an average annual rate of 7.1% from 2011 to 2035 and its share of the total generation mix will rise to 5.4% by 2035 from 2.9% in 2011, according to the International Energy Agency (IEA).

"In terms of potential perceived by foreign investors, the bulk of the interest has seemingly been in Indonesia, the Philippines and Thailand," Mr Jacobelli wrote in an email to Asia Focus. "Thailand has built arguably one of the best track records for foreign investments in the electricity industry in general, including renewable energy projects."

Government policies are absolutely crucial to attracting foreign investors to renewables, as is the availability of domestic and international bank lending, he said.

"The policies need to be clear, transparent, and most importantly consistent as in Thailand, as opposed to Australia where various governments have had different policies toward renewable energy," he added.

"Asia's clean energy projects sometimes struggle to secure financing, as many are smaller than conventional projects. Lenders may also be worried about weak incentives in countries such as the Philippines and policy U-turns such as in Australia."

Funding may start to improve as multilateral lenders get on board. The Asian Development Bank has promised to increase funding for renewables, and the new Asian Infrastructure Investment Bank has said green projects are a priority.

Germany-based BayWa, one of the world's leading players in renewables, is optimistic about the trend in Asean.

"Solar will still be the major driver for big growth of the renewable energy segment in the region with a particular focus on the Philippines and Malaysia this year," Daniel Gaefke, BayWa managing director for Asean, told Asia Focus in an email.

"We expect double-digit growth in Asean for solar while bioenergy will see stable growth."

BayWa has set up a regional office in Thailand, where small solar rooftop projects are the main focus of its new solar business.

While solar is shining, bio-energy projects have struggled to secure financing. Other key hurdles in the renewable field are grid management and capacity issues.

"With this, we see curtailments of projects here in the region which is not good for investor confidence," said Mr Gaefke, calling on governments to introduce a clear policy on commercial solar rooftop systems and international consumption projects.

"Solar power can be used at the location where it is produced without affecting the grid as much as large-scale utility projects do."

Banpu Plc, the leading coal miner in Asean, has already started to invest in solar power projects with Japan being its first market. Renewables are projected to account for about 20% of the company's total generating capacity of 4,300 MW in 2025.

"We have also studied investment opportunities in Asean renewable markets such as Laos, the Philippines and Indonesia," CEO Somruedee Chaimongkol told Asia Focus, adding that apart from solar power, Banpu also was looking at hydropower, biogas, wind farms and biomass in Thailand, China and Japan.

"The growth of the renewable energy business is substantial as every country has set a target for renewables to have a share of 20-25% of power generation capacity," she said. "But if we look at energy capacity growth as a whole, coal will still hold the largest share of almost 35% until 2040. Coal-fired generation will continue to grow but at lower rate than renewables."

Csilla Kohalmi-Monfils, head of strategy for new business and communication at Engie Asia Pacific, said that to encourage investments in renewable energy, governments needed to provide incentives for low-carbon investments at the right place and right time, while de-incentivising the use of fossil fuels.

Energy efficiency will also play a bigger role in the future as awareness of the benefits grows.

"Machinery replacement generally results in around a 10-20% cost reduction but competent energy management practices could bring about cost reductions of as much as 20-40% in some cases," Mr Sawat said.

Drivers of energy efficiency include supportive government regulations and incentives, especially when energy prices are high, and also policies promoting energy security and greenhouse gas reduction. Barriers are lack of awareness among business operators and limited availability of technologies.

Southeast Asia could achieve efficiency gains of 12-30% by 2020, which would bring savings of $15-43 billion. To achieve that, investments of about $11 billion are required, he added.

"Well-connected European energy grids will translate into direct savings for consumers," she told the conference. "EU consumers could, each year, save 12-40 billion euros if energy markets were fully integrated."