An additional 1 million individual taxpayers will be exempt from paying personal income tax after caps on personal and expense allowances are raised. The Revenue Department argues that low- and middle-income earners will benefit most from the new structure. 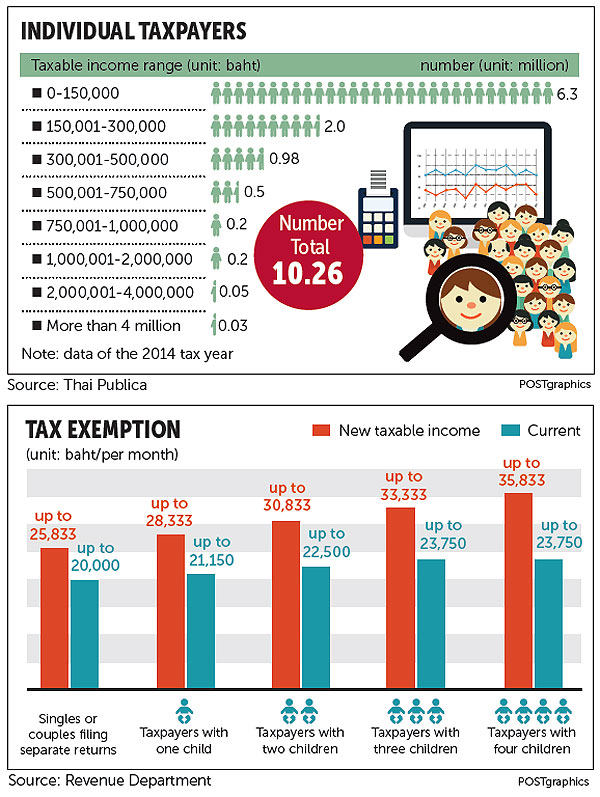 Those who earn a monthly income of up to 25,833 baht will no longer be liable for personal income tax -- up from 20,000 baht -- after hikes in the caps on personal and expense allowances come into force, said director-general Prasong Poontaneat.

He was quick to deflect criticism that high-income earners in the 30% and 35% tax brackets would see the most benefit from the new structure, saying all individual taxpayers would benefit, especially low- and middle-income earners.

The government estimates it will lose 32 billion baht in tax revenue from the changes in the personal income tax structure, with 70-80% of the forgone revenue stemming from the higher personal and expense allowances for low- and middle-income groups, said Mr Prasong. 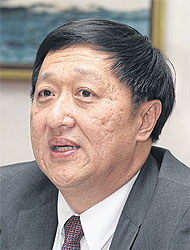 "Those who have a taxable income below 500,000 baht number more than 8 million," he said. "I affirm that low- and middle-income earners will reap the most benefit."

The cabinet on Tuesday approved the new personal income tax structure, including increases in the income band for the 30% bracket to 2-5 million baht from 2-4 million, with the top rate of 35% starting from 5 million baht. The 5%, 10%, 15%, 20% and 25% income bands remain unchanged.

The cabinet also approved a hike in the expense allowance cap to 50% of annual income, but not exceeding 100,000 baht, while the personal allowance was doubled to 60,000 baht from 30,000.

The new structure, which will take effect from the 2017 tax year, will also abolish the cap on the child allowance, now limited to three children. The allowance per child will also double to 30,000 baht from 15,000.

Mr Prasong said the lower tax bills would put money into the pockets of individual taxpayers, spurring consumption and allowing the Revenue Department to bring in more from value-added tax.

He added that even if taxpayers save a portion of that money, they would deposit it into a bank, where they would be subject to a 15% withholding tax on interest exceeding 10,000 baht a year.

Somchai Jitsuchon, a research director for inclusive development at the Thailand Development Research Institute, said the government's recent move to restructure the personal income tax is reasonable, in that it reflects the higher cost of living, while a deduction for allowances has not been made since 1992.

He added that the lower tax rate for those with taxable income of over 4 million baht also reflects today's higher cost of living since the amount of money that those people earn is not worth as much as it once was due to inflation.

Mr Somchai argued, however, that deductions associated with the purchase of long-term equity funds, insurance schemes and interest from mortgages should be abolished because they are unnecessary.

"The government has only done a so-so job in nurturing urbanites and high-income people, but those who earn less than 26,000 baht per month have not gained sufficient benefits," he said.

Mr Somchai said the government will likely earn less tax revenue as a result of the personal income tax restructuring, while the infrastructure investment plan and public spending associated with social security will force the government to shoulder a greater burden.

The government might have increased other taxes to compensate for such spending, he said, adding that the draft bill for the land and buildings tax is reasonable.