Thailand has re-entered the top-25 list of the A.T.Kearney Foreign Direct Investment Confidence Index after a two-year absence, being ranked 21st in the 2016 FDI Confidence Index.

The index, created in 1998, is a forward-looking analysis of how political, economic, and regulatory changes will likely affect FDI inflows into countries in the coming years. It is based on a survey among executives in the world’s leading corporation.

In this year’s survey, 22% of the respondents said they were more optimistic about Thailand’s economic outlook over the next three years, compared to a year ago.

“Thailand has been one of the success stories of Southeast Asia. It has moved from a low-income country to an upper-income country in less than a generation, creating an attractive pool of potential consumers with higher disposable incomes. That has been a pull factor for companies looking to enter Thailand,” said Soon Ghee Chua, partner and head of Southeast Asia at A.T. Kearney.

He said Thailand had also emerged as a manufacturing hub. Many companies have set up facilities in the country and export goods to other parts of the region from Thailand.

“The country is also a member of Asean, further adding to its lure for companies looking to tap into the 10-nation economic bloc’s growth potential. In particular, the strong growth of Myanmar, Vietnam and other countries in the Greater Mekong Region have made Thailand a natural hub to enter those countries,” Mr Soon added.

The results of the index also show that domestic market size, cost of labour, regulatory transparency and lack of corruption are among the top factors that executives look at when making decisions about investing in a country.

Overall, five Asian countries feature in the top-10 rankings in this year’s Index, highlighting the confidence global business leaders have in the region. They are China, Japan, Australia, India and Singapore. 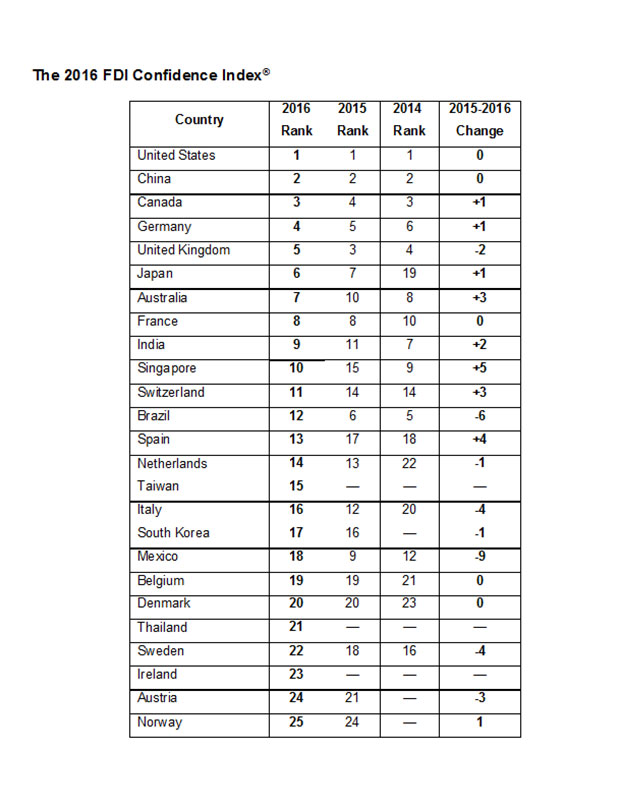