Thai exports slipped back in April after two months of growth, hit by continued weak global demand and falling commodity and oil prices.

The Commerce Ministry reported yesterday that exports fell 8% year-on-year to US$15.5 billion, with imports plunging by 14.9% to $14.8 billion.

Thailand had a trade surplus of $721 million in April. 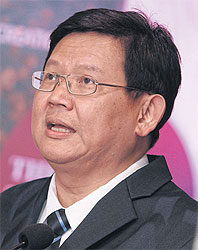 In March, Thailand's shipments rose 1.3% following February's 10.3% increase. Both increases were driven by gold and special items of hardware for military exercises.

According to the Commerce Ministry, exports of agricultural and agribusiness products shrank 2.8% to $2.52 billion in line with a continued drop in global prices. The drop was led by rice (-11.5%) and sugar (-15.8%).

Exports of industrial products fell 7.8% last month to $12.2 billion, mainly because of a 9.7% drop in the shipments of cars and parts.

Deputy Commerce Minister Suvit Maesincee said based on the performance in the first four months, it would be very difficult to achieve 5% export growth as projected.

"For the remaining months, we could achieve 5% growth if shipments average $19.4 billion a month," he said. "But we would see only 2.5% growth if we could do only $18.5 billion on average a month."

"A supporting factor [gold shipments] helping export growth in March recorded substantially lesser growth in April as gold prices have softened because of financial markets' projection of the US Federal Reserve's rate rise [next month]," he said.

K-Research forecasts flat growth for this year's exports based on a 3% GDP growth forecast for Thailand. This year's export growth remains a challenge and further monitoring has to be made on upcoming export figures, said Mr Charl.

But if a rise in oil prices continues, this would help shore up prices of petroleum-related exports, he said.

The agricultural sector and small and medium-sized enterprises are deemed as the most affected segments by the export slowdown, said Mr Charl, adding that loan delinquency in these businesses could rise given the downbeat outlook on exports.

Despite the lacklustre export projection, economic conditions are expected to bottom out in the middle of this year and pick up gradually in the second half supported by sustained oil prices and seasonal rainfall alleviating the drought, he said.