The Erawan natural gas field, operated by Chevron Thailand Exploration & Production Ltd. The company's concession for the field , located in the Gulf of Thailand, run through 2022. (Photo by Chanika Suksomjit)

Chevron Corp is weighing a sale of a roughly US$500-million stake in its Thailand gas field even as the government moves to negotiate a better return from petroleum concessions held the US company and PTT Exploration & Production Plc.

Chevron is seeking to divest some Asian assets to weather a global slump in energy prices, according to people familiar with the matter. The company is considering options for its 16% holding in the Arthit field in the Malay Basin, the people said, asking not to be identified as the details are private.

The US oil company has held preliminary talks about selling the stake to PTTEP, which owns 80% of the field and is the operator, the people said.

Chevron, the largest US oil producer after Exxon Mobil Corp, is selling assets, cutting headcount and cancelling drilling projects to conserve cash after oil prices last year fell to the lowest level in more than a decade. The San Ramon, California-based company is also seeking buyers for its stake in an Indonesian oil and natural gas field, while a planned sale of its Asian geothermal assets could fetch as much as $3 billion, people familiar with the matter said last month.

A Chevron spokesman said the company doesn't comment on market rumours or speculation.

A spokeswoman for PTTEP said the company is considering opportunities amid the rout in global oil prices. The firm is interested in assets that are producing or about to start production in Thailand and other Southeast Asian countries, "in line with our strategic investments", she said in an emailed response to Bloomberg queries. "However, PTTEP should not comment on Chevron's business."

Meanwhile, Reuters reported that Energy Minister Anantaporn Kanjanarat said policymakers would meet on Monday to discuss increasing the government's share of the revenue in return for extending the contracts, which are due to expire in 2022-23.

If they fail to reach new deals, another option would be to put the concessions up for auction, Mr Anantaporn told reporters at a seminar, adding that the plan was subject to cabinet approval.

The ministry would only negotiate with the oil companies after getting cabinet approval.

The two contracts account for about 65% of Thailand's petroleum output. Under the existing deals, the government receives taxes and royalties equivalent to about 67% of pretax profits from production.

The country relies on natural gas to generate nearly 70% of its power and is under pressure to secure long-term energy supplies as its own resources are expected to run out in six to seven years. 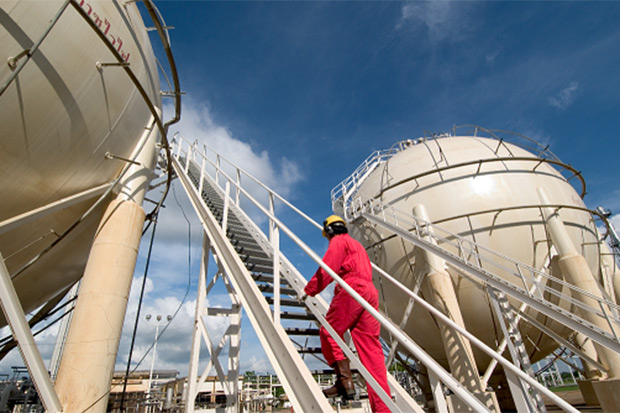 A natural gas facility operated by PTT Exploration & Production. The government wants to renegotiate its concession deal with the firm. (PTTEP photo)

About a fifth of its supplies are piped in from neighbouring Myanmar but imports are likely to fall as the country is expected to use more of its natural gas for its own development.

Chevron produced 1 billion cubic feet of gas from all its fields last year in Thailand, the country with its biggest production volume after the US, according to its 2015 annual report. It also owns and operates fields in the Pattani Basin in the Gulf of Thailand, the report shows.

The government also is considering raising its long-term target for renewable energy if production costs continue to fall as part of its drive to reduce dependence on fossil fuels, the energy minister said.

New technologies have helped cut average production costs for renewables by 30% a year in the past seven years to 30 million baht per megawatt, he said, adding they were likely to fall another 20% over the next five years.

The government wants to boost renewable energy to more than 19,000 megawatts, or 30% of its total energy production mix, by 2036, the minister said, citing the latest power development plan.

As of April, the government had signed contracts with power producers to buy 9,041MW of renewable energy, mostly biomass and solar, and about two-thirds had already been linked to the national grid, he said.