India is looking at numerous ways to drought-proof itself for the future, but for now millions are just trying to get enough water to survive.

Local residents collect water from a pit dug in the dry bed of a river in Tikamgarh district of Madhya Pradesh.

When his intermediate school examinations ended in March, Shivam Mishra was looking forward to relaxing and having fun until July when the new term would begin.

But Shivam, who lives with his uncle, two sisters and grandmother in Laroun, a village in Tikamgarh district in central India, had not reckoned with the scorching, dry summer India has been enduring.

Every morning the 17-year-old sets off on his bicycle to queue at a hand-operated pump, located about five kilometres from his village, to collect water in cans that he ties to his carrier. His sisters walk home balancing water jars on their heads. The lone pump on the Naugaon-Chhatarpur highway serves around 7,000 people living in Laroun, Madahar and Murrah Baba villages, a 10-hour drive southeast of New Delhi.

The hand pump, Shivam says, invariably causes traffic jams on the road as people from the three villages queue from 4am to midnight to collect water. The village had a well but it dried up a month ago, he said. There is also a government tanker that supplies water to the three villages. But it always seems to be emptied out after it has stopped at the house of the panchayat (local government) head.

"The tanker only serves people who are connected to the ruling class. Poor people like us have to fend for ourselves," Shivam says, expressing his wish to join millions of people who have already migrated from the Bundelkhand region to Delhi and other northern states to find work.

The worst affected regions are Vidarbha and Marathwada in Maharashtra, and Bundelkhand. Records show that 3,228 farmers committed suicide in Maharashtra state in 2015, mainly because of hardships brought on by crop failure, indebtedness and other reasons related to drought. Some deaths have also been linked to fetching water in the last two months. The central government so far has delivered more than 40 million litres of water to Maharashtra by train.

In Bundelkhand, a mountainous region straddling seven districts of Uttar Pradesh and six in Madhya Pradesh state, rains have been below normal since 2007 leading to crop failures, drying up of rivers, ponds, dams and bore wells. More than half of its tube wells and hand pumps are no longer functional.

Beyond the struggling villages, even people living in towns face water rationing with some obtaining a piped supply for only two hours once every four days. People in remote villages in particular stay awake at nights to fill up their quota from community hand pumps.

Fearing water thefts by farmers in Uttar Pradesh, the Madhya Pradesh state government has deployed armed guards at the Barighat dam in Tikamgarh. One farmer has been arrested in Mahoba, a major city of Bundelkhand, for stealing water from a public pipeline.

The economic damage caused by the drought is mounting. The government of Prime Minister Narendra Modi plans to increase its spending on crop insurance to 77.5 billion rupees (US$1.15 billion) by fiscal 2019 from 28.2 billion rupees in 2015-16.

The central government has also released $4.66 billion under the MNREGS (Mahatma Gandhi National Rural Employment Guarantee Scheme), a food-for-work programme. Some of the money represents advance payments for May and June, and the rest is to clear wages in arrears.

The governments in northern, western and southern states have embarked on massive programmes to rejuvenate ponds, rivers, dams and bore wells, while Mr Modi has emphasised the need for drought-proofing in the future.

In his meetings with chief ministers of drought-affected states, the prime minister has stressed the use of technologies such as remote sensing and satellite imaging in order to plan water conservation and recharging structures. He has called for change in cropping patterns based on scientific advice, the use of drip and sprinkler irrigation, and greater involvement of the community, especially women, in water management. 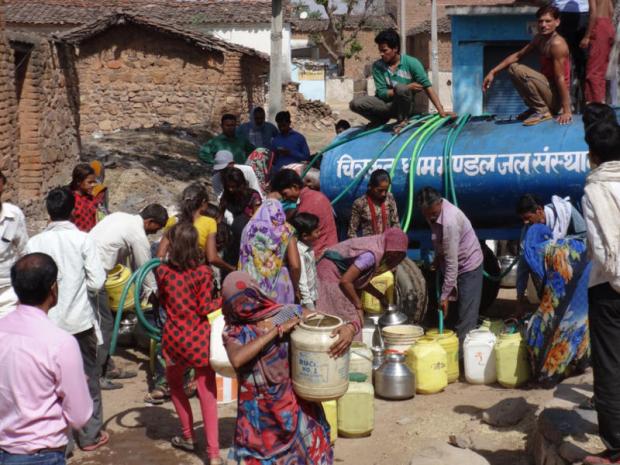 Residents queue to replenish supplies from a tanker truck in Tikamgarh district. Some complain that the water often runs out after the truck has visited the homes of well-connected people.

As well, Mr Modi has suggested that all water tankers be equipped with GPS to make sure they are delivering water to the affected areas they are supposed to be serving.

However, water conservation experts and environmentalists believe the government has not taken enough steps to arrest the decline in water availability.

Conservation experts want the government to reduce incentives for planting sugarcane, paddy and other water-consuming crops that it exports, practise virtual water trade, prioritise its water needs, and use MNREGS funds to create water-harvesting infrastructure. As well, they say the country needs a comprehensive national water policy for better management, governance and regulation of water distribution. They want the government to follow models adopted by Israel, Australia, the United States and European countries to conserve and sustain water resources.

"When we export one kilogramme of sugar we are also importing 2,500 litres of virtual water," says Pradeep Purandare, a former professor at the Water and Land Management Institute in Maharashtra state, referring to the amount of water required for production of the commodity.

"Eighty percent of Maharashtra's 240 sugar mills are located in Marathwada region which is water-deficient."

Mr Purandare has filed public-interest litigation cases in courts to demand strict enforcement of laws to regulate cropping patterns as well as public and private water bodies. He told Asia Focus that the Maharashtra Irrigation Act of 1976 empowered the state government to ban planting of bananas and sugarcane which were water-guzzling crops and exacerbated conditions arising from the rainfall deficit.

Like their counterparts in Maharashtra, farmers in Punjab and Haryana states and western Uttar Pradesh and Bundelkhand regions prefer to grow rice, wheat and other cash crops that consume relatively high quantities of water.

One solution is to change cropping patterns and methods using the System of Rice Intensification (SRI) and Sustainable Sugar Initiative (SSI) to reduce water intake, says Himanshu Thakkar, coordinator of the South Asia Network on Dams, Rivers and People.

He points to Egypt and China as countries that have tapped the advantages of virtual water trade. China has been importing food grains, soybeans, palm oil and poultry from Brazil and Argentina since 2000 when it embarked on a campaign to conserve more water. Up to 1996, China was the world's largest exporter of soybeans. The country now exports fewer water-consuming vegetables and fruits as well as processed fruits. Likewise, Egypt has been the world's largest wheat importer for many years.

Water experts also say proper pricing of water consumption by households as well as industries is essential if conservation is to be promoted. Water prices vary because setting them is a state responsibility. According to figures available from the Central Water Commission for 2010, charges in Gujarat ranged between 15 and 60 rupees (8 to 32 baht) per cubic metre, but in Andhra Pradesh water cost as little as 33 paise (18 satang) per cubic metre.

Mr Purandare said that despite subsidising water prices, the Maharashtra government recovered only between 10% and 15% of the tariff from individuals and 30% from farmers. He also accused politicians of having ties to illegal mineral water plants selling bottled water in urban and rural areas.

Indian farmers largely rely on the southwest monsoon (seasonal winds blowing from the Bay of Bengal and the Arabian Sea) which bring rain from June through September.

The country also has a network of canals, inherited from the British, but today they are woefully inadequate for irrigating crops. The primary sources of its drinking water supply are rivers, streams and ground water.

The distribution of river, reservoir and dam water has given rise to major conflicts between different Indian states over the years.