Thai Union aims for a century

Now that the seafood processor has become a global industry leader, longevity is its next preoccupation

Turning a local seafood processing company into a global industry leader within two decades is a rarity, a dream come true for Thai Union Group. The company's next goal is to survive for a century.

If Thai Union reaches its long-term revenue target of US$8 billion by 2020, chief executive Thiraphong Chansiri wants to ask, "How far can we go?"

"Ultimately, I want to see Thai Union last until the celebration of its 100th anniversary," Mr Thiraphong said of the 39-year-old firm. 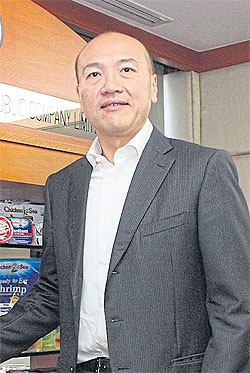 Thai Union boss Thiraphong Chansiri now sees the failure to take over US-based Bumble Bee Foods as something of a blessing.

The company spent its first 20 years operating locally under the hand of founder and current chairman Kraisorn Chansiri. It first ventured abroad to the US in 1996 led by Mr Thiraphong.

After some initial rough patches in the US market, Thai Union weathered the storm there just as the domestic market became more competitive. In 2010 the company penetrated the European market, where its journey to become a global company began.

Mr Thiraphong shared his outlook for Thai Union with the Bangkok Post.

"Even though our net profit fell 19% to 1.23 billion baht compared with 1.5 billion last year, I'm still happy with the figure because the dip came from foreign currency exchange, which has nothing to do with our operations," he said.

"I'm even happier to see our stronger operations reduced our debt-to-equity ratio to 0.69 times, below our target of one time. This could translate into stronger finance for further investment."

Thai Union is not only focused on high sales revenue but also remaining a leading global seafood company, which means shifting its revenue from the commodity market to high-value goods.

"Strong fundamentals are essential so every move we make is careful. A 10-15% growth rate for Thai Union is favourable so we can pay dividends regularly to shareholders and keep our finances strong, allowing us to invest comfortably without needing to raise funds," he said.

The company failed to seal a $1.5-billion takeover of Bumble Bee Foods last year. Looking back on the deal, Mr Thiraphong said it might have been a blessing for it to fall through as Thai Union could better focus its resources elsewhere.

The company estimated to gain $1 billion in annual revenue from the Bumble Bee takeover.

Food service and marine ingredients products will mostly come from its innovation centre -- the Global Innovation Incubator -- which was set up last year to serve all units of Thai Union worldwide.

He said if each bucket could expand as planned, its 2020 revenue goal of $8 billion is definitely possible.

"We have expanded firmly the past six years and this will continue from one continent to another. In the near future, our business will cover all continents," said Mr Thiraphong.

By 2020 Thai Union wants to have its footprint on all inhabited continents, selling mainly high-value products to stay competitive, he said.

To accomplish this goal, the company built a matrix organisation, appointing 15 global team leaders to drive each unit to reach their target. It developed a group ecosystem to ensure every unit is working towards the same goal.

"We have never stopped integrating our new assets, leveraging them and synergising them as we keep reviewing our footprint. I'm pretty sure we can make it," said Mr Thiraphong.

Next year Thai Union will begin developing its new five-year business plan for 2021-25.

"I have not thought about a succession plan yet, but I can say it doesn't need to be someone from the Chansiri family. It could be anyone who we are confident can lead the group to celebrate our 100-year anniversary," he said.