BEIJING - New home prices in China grew at their fastest pace in more than two years in May, a private survey showed, signalling the recovery of a crucial sector in the world's second-largest economy. 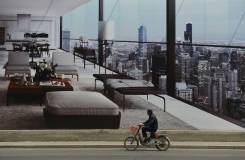 China has a huge inventory of unsold new homes

After fuelling much of China's spectacular growth in recent decades the property market has been in the doldrums for the last two years, with new buyers priced out despite government borrowing restrictions reining in soaring costs.

Beijing has introduced several policies to try and stabilise the market, including lowering the minimum down payment requirement, cutting transaction taxes and providing incentives for migrant workers to buy homes.

According to the China Index Academy (CIA), the research unit of real estate website operator Soufun, new apartment prices in 100 major Chinese cities rose 1.7 percent since April and were up 10.34 percent year on year -- their fastest growth in 27 months.

China's economy grew only 6.9 percent in 2015, its weakest rate in a quarter of a century, and concerns about its slowdown have roiled global markets.

The real estate market is a key driver of growth but the country has a huge inventory of unsold new homes.

At a policy conference in December, authorities pledged to encourage developers to "moderately cut housing prices".

They also promised to reform the household registration system to provide equal access to social benefits such as pensions and education so as to boost the appeal of city homes to migrant workers.

This year the government also cut minimum down payments for first homes in most cities to 20 percent, an all-time low.