Headline inflation is on track to reach the low end of the target later this year, says Bank of Thailand governor Veerathai Santiprabhob.

The increase in consumer prices for a second straight month in May had been expected because of rising prices of petroleum and food supplies, he said.

"We already expected that headline inflation would turn positive in the second quarter and would reach the lower threshold of the central bank's inflation targeting policy by year-end," Mr Veerathai said. 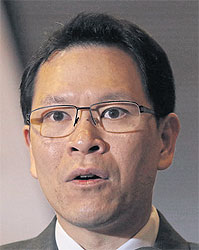 Veerathai: Rise in prices was expected

The consumer price index edged up by 0.46% in May from a year earlier after rising 0.07% in April, its first annual gain in 16 months. The core inflation rate, which excludes raw food and energy prices, was registered at 0.78% in May, unchanged from April's figure.

The cabinet late last year approved the central bank's 2016 headline inflation target of 2.5% plus or minus 1.5% on average, the same level as 2015.

The central bank forecasts headline and core inflation this year at 0.8% and 0.9% respectively, while the Commerce Ministry estimates inflation will rise to 0-1%.

Emphasis on economic growth can be a focal point for policy deliberation when inflationary pressure is low while ensuring that such a move will not incur risks to economic stability in the long run, he said.

Robust tourism growth cannot compensate for sluggish exports as tourism accounts for a mere 10% of GDP, but tourism remains an important growth driver, he said.

Foreign direct investment requests for the Board of Investment's consideration have been high but several factors will dictate whether these requests will translate into actual investment schemes.

Under the plan, investors will be able to double deductions for their investment expenses if they start a project or begin construction this year and new projects will not need to be completed within a year to qualify.

Clearer development of the government's infrastructure projects in the second half should also help lift private investment, he said.

As interest rates in Thailand remain low and financial liquidity is abundant, businesses should consider starting their investments now, said Mr Veerathai, noting that private investment has been low at a macroeconomic level and businesses should enhance their competitiveness and productivity.

Despite a raft of state stimulus measures, private investment remains at a low ebb as investors still lack confidence.

GDP surprisingly expanded at an annual rate of 3.2% in the first quarter, the highest pace in three years.

"We will keep an eye on economic momentum for the remaining three quarters of this year before making a decision as to whether additional stimulus packages should be introduced," said Mr Somchai.