Siam Symphonic Band perform a concert at the National Theatre, Bangkok, to celebrate the 135th anniversary of the birthday of Prince Paribatra Sukhumbhand of Nagor Svarga.

Inspired by military service in Germany, Prince Paribatra (1881-1944) wrote over 70 marching band pieces during his life. Many western brass instructors served at the court of Siam. 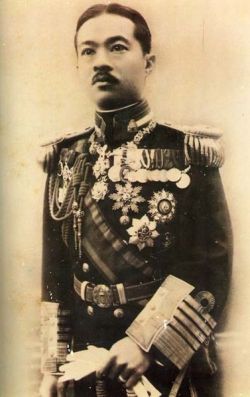 Photograph of Prince Paribatra Sukhumbhand of Siam, Prince of Nakhon Sawan. Heir to the throne and Minister of the Interior Date circa 1900s (Source: Wikipedia)

Prince Paribatra Sukhumbhand of Nagor Svarga (1881-1944) is well-known as the Father of Western-style Thai Music.

Prince Paribatra as the son of King Rama V attended the Prussian Military Academy in his youth.

Serving in the German army, the prince was bestowed several honours and distinctions, including Kaiser Wilhelm II's special commendation.

He later returned to Siam not only with military knowledge, but also musical inspiration -- both in playing musical instruments and in musical composition.

Over the prince's lifetime, he composed more than 70 musical pieces (see list here).

Throughout their concerts, the band always started with the Paribatra March, one of the prince's most popular compositions, composed during King Vajiravudh's reign (Rama VI) for navy band concerts. Listen here:

Other of the prince's compositions and rearrangements performed were the Damrong March, Soke and Krob Jakrawal.

Aside from the prince's music, the band also included the Royal Guards March, which was composed by HM King Bhumibol Adulyadej in 1953. Listen here:


This music tour marks the first time Prince Paribatra's compositions have ever been performed outside of Thailand.

When Prince Paribatra Sukhumbhand returned from Germany in the 1920s, that is when the real development of Thai brass bands took off.

The prince required all members of military brass bands (marching bands) to learn to read and write Western-style musical scores and perform by using the western style musical notes he arranged.

The prince composed many songs, both in Western and Thai traditions — salutation songs, marching songs for parades and funerals, gala dinner concerts for dignitaries and more (listen to play list of his compositions here).

His masterpieces include the Paribatra March, the funeral march Soke, and Krob Jakrawal.

Prince Paribatra was the composer who transcribed the ancient tune Maha Rirk into a standardised musical score that is still used as ceremonial music. Listen here:


Until today, the sound of the bugle remains an everyday signal at military barracks, and the foundation of Western music in Thailand, like other foundations, has its roots in the military. 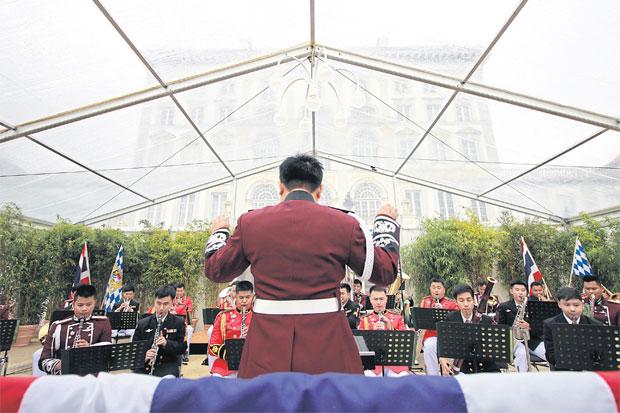 The Siam Symphonic Band performing at Nymphenburg Palace in Munich.

Recently, a seminar was held entitled "From Trae Wong To Symphonic Band", held to reflect on the long history of Thai music and to trace the use of horns and brass instruments — trae in Thai — in rituals and military ceremonies in Europe and Asia since ancient times.  The seminar was led by experts in music including Emeritus Prof Dr Poonpit Amatyakul, Anant Narkkong and Wisit Jitrapong

According to the book Trae Wong (Brass Ensembles), also published to mark Prince Paribatra's birthday, the first use of brass instruments in Thailand was during the reign of King Narai the Great (1656-1688).

Over two centuries later in the reign of King Rama IV, former British military officer Capt Impey and Capt Thomas Knox had introduced the use of bugle sounds as signals for training conscripts for the Grand Palace and the Front Palace.

In the same reign, brass instruments for a whole band were purchased but not used until 1862. Then the German warship Acona sailed into the Kingdom, and its brass band performed for the procession to bring the royal tidings to King Rama IV. 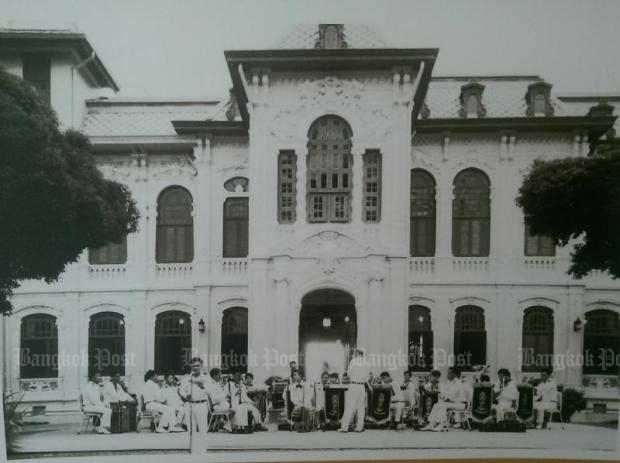 A military brass band performs at a palace in Bangkok.


WESTERN BRASS INSTRUCTORS AT THE COURT OF SIAM

The band conductor Master Friez offered his service as brass instructor to Siamese musicians. It took about a month for Siamese soldiers to learn and finally to play three Western-style songs.

Later, the arrival of US warships on diplomatic journeys to Bangkok, such as Vandila in 1868 and Tennessee in 1877, provided opportunities for Siamese musicians to practice and learn about American styles and songs for brass musicians. The US sailors spent over two months in Siam and taught Siamese soldiers to hone their brass playing skills. The warship Tennessee came with brass instructor Capt Michel Fusco, who stayed and taught at the Royal Thai Navy for 25 years until his death in 1902. He taught army and navy brass bands to perform as marching bands for inspection of troops and perform while sitting as symphonic bands and play Thai traditional music.

Another important brass instructor in Siam was Jacob Veit (1844-1905), a German-American who served the American army in California during the Civil War in 1866. Veit came to Siam and worked as music instructor at the Front Place of King Pinklao, the second king of Siam during the Fourth Reign, until 1885. He taught a number of Siamese soldiers to play brass as signals and to play for small brass bands. His most outstanding student was MR Chit Seniwong, who was good at writing music and also playing. He was later promoted to the rank of Phra Withitborathes and was the first Siamese to be bestowed with a royal medal for music by King Rama V in 1885.

The Royal Thai Army Brass Band was formed in the late 19th century and became popular in Siam ever since. Their performances varied from marching band to symphonic bands in concerts, playing both Western and traditional Thai music. Besides this band, there was a rise in non-military brass bands performing in parades and festivals and also in theatres for silent movies.

During 1882-1902 in the reign of King Rama V, army brass bands were formed by regional armies and their members taught the music to local people, leading to the establishment of more brass bands at the local level. 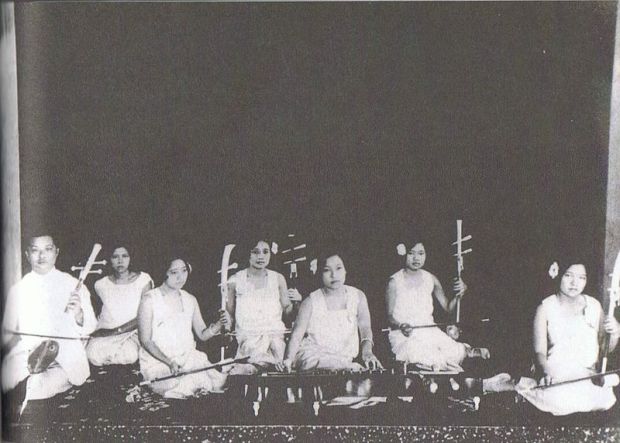