A boxing trainer instructs a 7-year-old girl in Muay Thai boxing. Some experts fear children are at risk of brain damage if they are hit too hard in the ring. File photo

Over the years, Muay Thai, also known as Thai klck-boxing, has gained popularity as a sport internationally.

An increasing number of boys and girls engage in the sport from an early age and this has raised concerns about the risk of brain damage.

It has become increasingly common for children younger than 15 to take part in tournaments in front of hundreds of spectators.

Child boxing matches in Thailand are often conducted under the same rules as adult matches, including the duration of fights.

Many children also do not use safeguards such as head protection.

Unlike those of adults, children's brains are growing and changing and are susceptible to greater damage.

The latest medical research in Thailand shows adverse effects on the brains of young boxers. 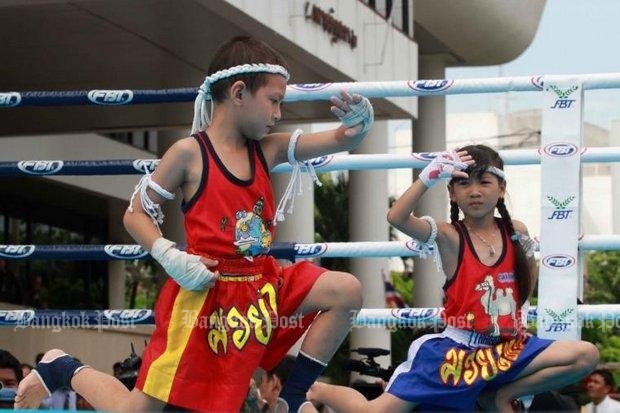 The risks of brain damage have worried many parents.

Medical research shows abnormalities appear on the brains of children who box when compared with children who don't take up the sport.

The brain ability and capacity of 200 children who don't box and 300 child boxers who had boxed for more than two years was compared in a recent study.

The study involved children aged below 15 and was conducted by the Advanced Diagnostic Imaging Centre (AIMC) and Injury Prevention Research Centre (CSIP) of Ramathibodi Hospital.

After reviewing MRI brain scans of the children, the studies found a lower IQ among child boxers and that lower IQ correlated with the duration of boxing, Professor Jiraporn Laothamatas director of the AIMC said.

The group of child boxers with more than five years' experience had an average IQ of 88, 10 points lower than standard IQ levels, she said.

The study also found more abnormalities in the structure of the brain, including tearing of branch -like projections of neurons, among child boxers than children who didn't box.

Many child boxing matches lack head protection according to Professor Prasert Boongird, a doctor from the Neurology Division of Ramathibodi Hospital.

BOXING SINCE HE WAS FIVE

He has been boxing since he was five and said he had fought about 30 times and won more than 20 fights.

Asked why he enrolled in Muay Thai boxing, Night replied: "Because I love it. I want to be a professional Muay Thai fighter in the future."

Night said he is not afraid of risks and not concerned about brain damage.

He said: "I am not afraid of those injuries. When you fight you will get hurt anyway. It is normal in Muay Thai."

His mother said she would never stop her son from doing what he loves.

When asked about the risks of brain damage that child boxers can get, his mother said:

"I don't think so. My son always gets good grades and I am not worried about the risks; in fact, I am proud of my son. I trust the trainer to take good care of Night."

"Muay Thai is a sport you can learn at a very young age," said Somchai Somboon, a Muay Thai trainer at Sor Buk Buek Muay Thai Gym in Hua Hin.

"Starting early makes you stronger and more experienced so you can become a good boxer in the future," he says.

"Training in Muay Thai from an early age is normal here in Thailand."

The 46-year-old trainer, who has practised Muay Thai since he was 13, said he has looked after child boxers for many years and strict safety procedures are in place during both training and competitions.

They love child boxing because children do not pretend or fix matches like some adults.

Children are "innocent and fight with pure spirit", making their bouts more interesting to adults.

But he admitted there was money involved as the number of tournaments across the country increases as child boxing gains popularity.

He said passion for the sport was the main reason children want to learn Muay Thai and they love to train and fight.

He said it is true many of them fight for money to care for their families but "the passion always comes first".

Mostly, children will start training when they turn nine or 10 years old, he said.