The Monday after Brexit (UPDATE TUES)

Traders work on the floor of the New York Stock Exchange (NYSE) on June 27, 2016 in New York City. Markets around the globe continue to react negatively to the news that Britain has voted to leave the European Union. The Dow Jones industrial average was down over 200 points in morning trading. Spencer Platt/AFP

The first full day of trading after the Brexit vote is over and it was a rough one. Asia was mixed but US and European stocks tumbled badly. We followed the turmoil all day and today we end with a short summary.

The Monday after Brexit

New York, AFP – US and European stocks tumbled again Monday, while the pound fell to a three-decade low against the dollar as global markets reeled from Britain's vote to leave the European Union.

But investors embarked on a new wave of selling in European trade followed by a heavy sell-off on Wall Street, as they grappled with the financial consequences of the Brexit referendum.

The two-day losses in the S&P 500 were $974.2 billion, the third worst back-to-back stretch in history, according to S&P Dow Jones Indices.

The dollar gained on both the euro and the pound, while oil prices retreated.

The New York Stock Exchange has opened and the Dow Jones Index promptly dropped by 148 points, or 0.85 percent. Overall, global investors are still clearly worried about Brexit. Analysts say trading this week throughout the world could be volatile. I'll have a short summary of the full day's trading tomorrow morning.

Here is how the London Stock Exchange was doing as of 2pm London time. Next comes New York. 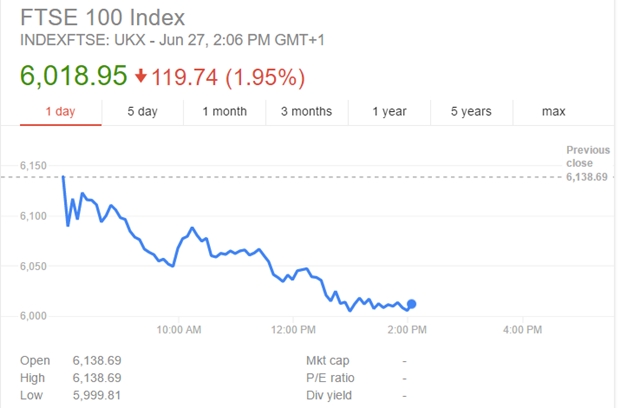 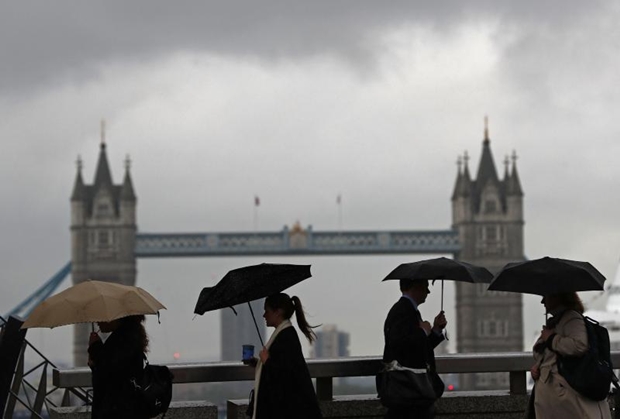 Commuters heading into the City of London walk across London Bridge, in front of Tower Bridge, in central London on June 27, 2016. /AFP PHOTO / ODD ANDERSEN

While investors in Thailand seemed calm enough, that is not the case this morning in Britain. The Guardian reports the FTSE 100 index of major blue-chip companies was as of 10am local time, down 100 points, a loss of 1.6%. That follows a 199-point tumble on Friday.

18:00  One piece of good news is that there has been no local panic. The Bangkok stock exchanges actually closed up. Here is a summary from our online reporters:

16:30  Well, there hasn't been panic today with many stock exchanges, including Bangkok, up slightly on the day. European markets have begun lower, however. 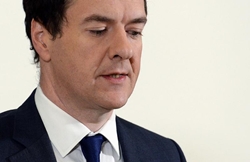 Osborne sought to calm markets after the country's shock vote to leave the EU, and insisted it would be not rushed into a break-up despite pressure from EU leaders.

He said Britain's economy was "as strong as could be" to deal with the fallout of Thursday's momentous Brexit vote.

In London trading, however, no-frills airline EasyJet topped the FTSE 100 fallers board in London, tanking more than 15 percent to 1,116 pence after issuing a grim profits warning. 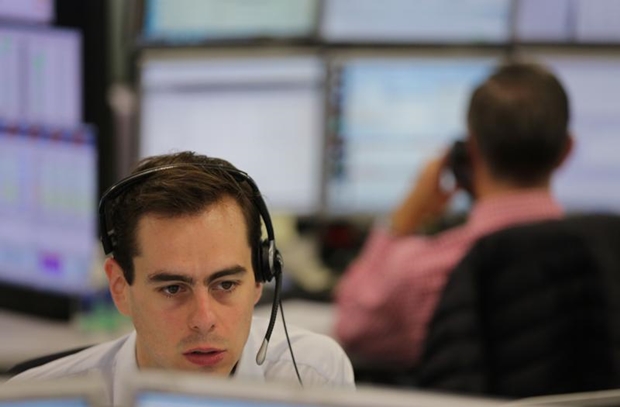 Traders from ETX Capital work in central london on June 27, 2015. Shares in banks, airlines and property companies plunged on the London stock exchange Monday as investors singled out the three sectors as being the most vulnerable to Britain's decision to leave the EU. / AFP PHOTO / Daniel Leal-Olivas

Meanwhile, oil prices have now seen a modest rebound on bargain hunting in Asia on Monday.

Pound sinks but some stocks bounce after Brexit vote

AFP – The pound fell Monday to around 30-year lows but most Asian stock markets rebounded from hefty losses fuelled by Britain's decision to leave the European Union, despite fears of months of uncertainty.

On equities markets the Nikkei in Tokyo ended up 2.4 percent – having plunged nearly eight percent Friday – while Shanghai added 1.5 percent and Sydney gained 0.5 percent. There were also gains in Wellington, Manila and Bangkok (up almost one percent at 15:00).

12:00 Oil, too, continues its fall as the fallout from Brexit is not good for economic growth,  in the short-term at least. It's not a panic, however. It won't be long before European financial markets open, so there is still lots of news to come.

Oil extends slide on worries about impact of Brexit

Singapore, AFP – Oil prices suffered fresh losses in Asian trade Monday as the fallout from last week's decision by Britain to leave the European Union batters confidence and ushers in a period of uncertainty.

Global markets took a beating Friday, with some $2.1 trillion wiped off valuations and the British pound plunging to 31-year lows against the dollar, while oil prices slumped more than five percent. And on Monday crude fell further.

11:00 There is still a lot of uncertainty in the markets and the British pound and many financial markets are suffering as a result.

AFP, Hong Kong, – The pound sank Monday to 30-year lows while most stock markets tumbled following Britain's decision to leave the European Union, with traders fearing it will lead to months of uncertainty.

Sterling plunged two percent in early exchanges as dealers rushed into assets considered safe, such as the yen and gold, although Japan's Nikkei stock index rallied after suffering a battering on Friday. 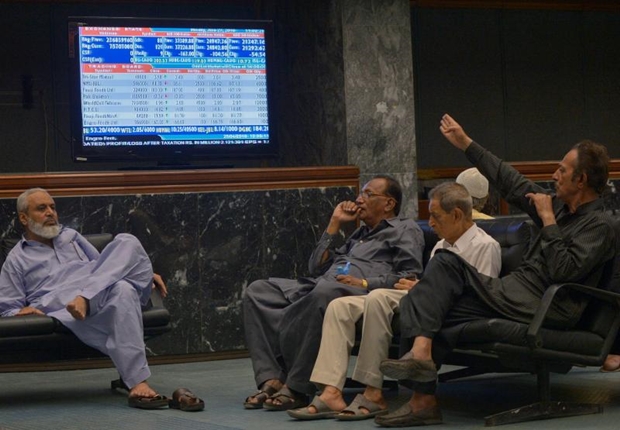 Pakistani stockbrokers watch share prices on a monitor during a trading session at the Pakistan Stock Exchange (PSE) in Karachi on June 27, 2016. The benchmark PSE-100 index was 37167.43, down 222.45 points in the morning session as global markets reeled from the Brexit-induced financial and political chaos. / AFP PHOTO / RIZWAN TABASSUM

He also said there was "a huge concern that London's status as the global financial capital will crumble" if it losses its "passporting" rights, which permit banks to locate themselves in the UK while offering products and services in the EU.

On equities markets Hong Kong shed one percent, Seoul was 0.5 percent lower and Wellington lost 0.1 percent. There were also losses in Singapore, Manila, Jakarta and Taipei.

10:00   Here in Thailand gold prices started the day up 250 baht from Saturday’ s close. Gold, of course, is often considered a safe haven in times of economic uncertainty. The Stock Exchange of Thailand Index is slightly, very slightly, lower as of 10am. The Stock Exchange of Thailand's main index opened at 1,411.72 points, down 1.47 points from Friday's close. The trade value was 1.42 billion baht with 332 million shares traded. 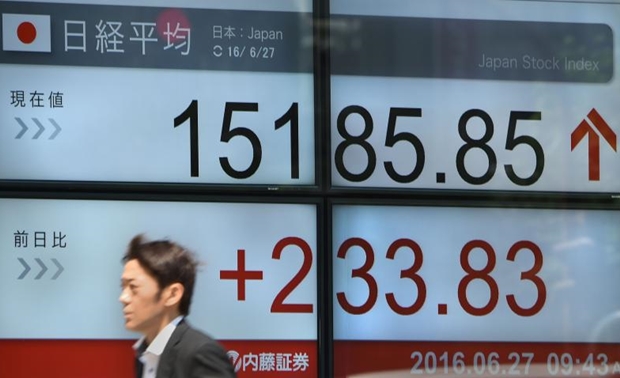 A pedestrian walks past an electric quotation board flashing the Nikkei key index of the Tokyo Stock Exchange (TSE) in front of a securities company in Tokyo on June 27, 2016. Tokyo stocks rebounded from a rout that wiped more than $2 trillion off global financial markets in response to Britain's shock vote to quit the European Union. / AFP PHOTO / TORU YAMANAKA

Tokyo, AFP – Tokyo stocks rebounded Monday from a rout that wiped more than $2 trillion off global financial markets in response to Britain's shock vote to quit the European Union.

But analysts warned that the pain may not be over on financial markets as the referendum result leaves a trail of unanswered questions about the impact of the decision to leave the 28-member bloc.

Japanese Prime Minister Shinzo Abe held an emergency meeting with top officials Monday morning to discuss Brexit and how to deal with the market fallout.

Ahead of the meeting, Abe pointed to unspecified measures to smooth out any impact on the world's number three economy.

Japan's currency surged Friday as traders scooped up the safe-haven unit, seen as a safe bet in times of turmoil.

The rally in the yen, which had already been on the upswing before the vote, is bad for Japanese shares as it poses a threat to profits at major exporters.