Bangkok's tangled wires, well-known for making a big mess when trucks knock down 18+ power poles, misunderstood by the billionaire philanthropist.

Billionaire philanthropist Bill Gates posted a photo of a tangled mess of Bangkok overhead wires to his Facebook page last week, the kind that the city is famous for (see here).

Bill Gates is the closest thing to a Superman of the 21st century, wiping out deadly diseases with large infusions of cash into medical research, but this time he allowed his imagination get the best of him.

He should have used Wikipedia to fact check before posting or asked an electrician.

The tangled mess was from residents tapping illegally into the public electricity supply, Gates further declared. 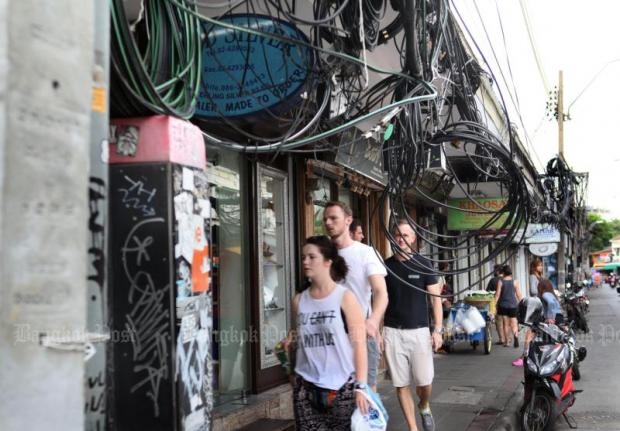 A trained electrician quickly explained to Gates what was going on.

The tangled mess consisted of "low voltage/communication/internet lines not electricity for people's houses.  The lines u see directly above the disaster of a mess is the actual power for houses and what not, the lines are always ran the same starting at the lowest voltage/telephone/internet at the bottom, it's just common sense bill gates."

Admittedly, this all does make you wonder where the street vendors found all over Bangkok sidewalks get their electricity from.

According to one informed source (sitting next to me), in his neighbourhood the street vendors run a long extension cord into the home or shop next to them and pay a daily fee to the owner for their electricity.

Here is what Bill Gates posted to his Facebook page:

"Due to faulty infrastructure, many urban areas suffer (from)fromfrequent blackouts and power cuts, and the electrical grid often doesn’t serve the people who need it most."

"I’ve visited many cities filled with tangled wires such as those in this photo from Thailand, where people have illegally tapped into the grid on their own to get the power they need—at great personal risk." 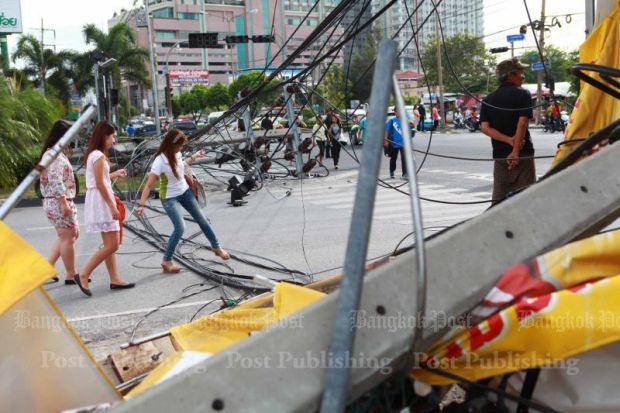 Sometimes wires fall down due to a crash or storm, creating a hazard for pedestrians.

Typically, a big truck accidentally runs into one pole setting off a chain reaction causing a whole series of poles to collapse, one after another. Road accidents often result in power poles being knocked down.

The Metropolitan Electricity Authority (MEA) is on the verge of laying its power lines and cables underground after starting the project in 2011.

Most telecoms and broadcasters currently rent cement poles from the MEA and the Provincial Electricity Authority (PEA) to lay their telecommunications wires, cables and optical fibre lines together with the electricity authorities' power lines.

But in recent years, state electricity enterprises have denied requests from telecoms wanting to rent their poles to lay lines.

State agencies say their poles can no longer support the weight of new lines.

Putting electricity wires underground would improve the beauty of city & prevent the collapse of concrete poles carrying too much weight, but would cost tens of billion of baht. 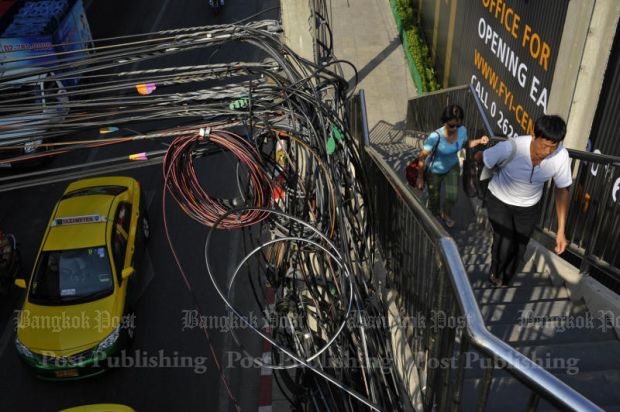 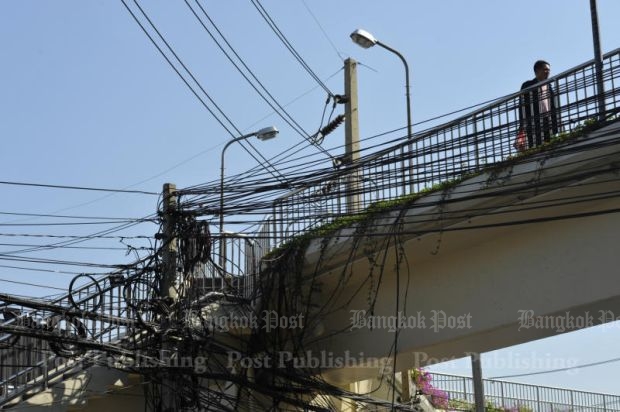