Montha Yokrattanakan, known as Ying Kai, took reporters into her home office yesterday where she showed them the various passports she had used to travel over the years. WICHAN CHAROENKIATPAKUL

The Foreign Ministry has confirmed the official passport of "Ying Kai", a woman suspected of lodging false complaints against her former employees, was issued following a request by the Prime Minister's Office.

The Foreign Ministry has confirmed the official passport of "Ying Kai", a woman suspected of lodging false complaints against her former employees, was issued following a request by the Prime Minister's Office.

A probe found she held an official passport when she worked under the secretary of the minister of the Prime Minister's Office under the Yingluck Shinawatra government, said Foreign Minister Don Pramudwinai.

Montha Yokrattanakan, 56, known as Ying Kai, has made headlines after she was accused by her former housekeepers of lodging false theft complaints against them.

Mr Don said Monday the Department of Consular Affairs issued an official passport to Ms Montha upon a request by the PM's Office in 2014. The passport expired on March 22 this year.

Pol Gen Chakthip said as for reports that some officers were behind Ms Montha's claims, an investigation will be carried out, he said.

Central Investigation Bureau (CIB) commissioner Thitirat Nongharnphithak said the CIB and the Metropolitan Police Bureau are working on the case, and the outcome should be known by next week.

Yesterday, investigators examined Ms Montha's condominium to recreate the incident when Ms Praphawan and her parents allegedly stole the valuables.

Based on CCTV footage capturing Ms Praphawan's family at the condominium, the family did not have enough time to break into Ms Montha's room to steal the valuables, according to CSD deputy chief Chakrit Sawasdee.

Referring to Ms Montha's complaint that 400 baht weight in gold bars and three million baht in cash disappeared, Pol Col Chakrit said that amount of valuables was likely to weigh more than 10kg and it was unlikely the family members were able to carry the bags containing these items. 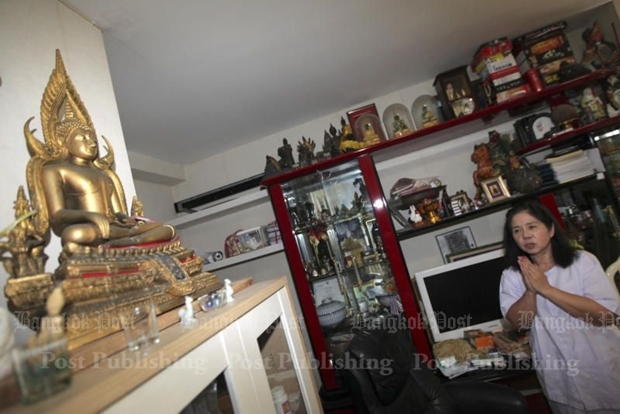 Ms Montha swears her innocence before the Buddha statue in her condominium, as she led the media to inspect the apartment Monday. She claimed her employees stole valuables worth more than 10 million baht from her. WICHAN CHAROENKIATPAKUL

Ms Montha led the media to her condominium on Monday. She said Ms Praphawan fled the condo through the fire exit, asking why she had done so if she was innocent.

According to the petition, sent by the assistant chief of Mae Sariang district, the women said Ms Montha persuaded them to work as maids, promising a salary of 7,000 baht and to sponsor their studies. After they took the jobs, they were denied studies and payment.

One of them returned home but Ms Montha demanded her family pay 30,000 baht, which they did for fear that she would be jailed. 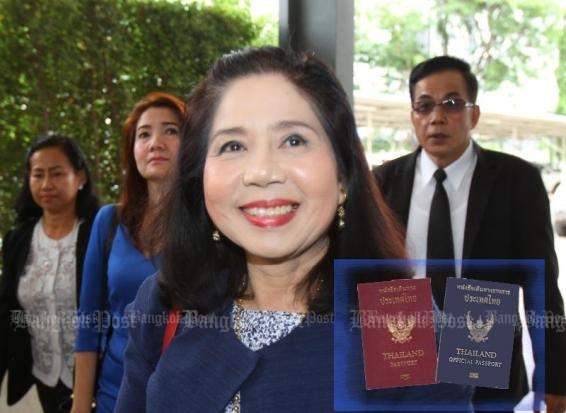 Montha 'Ying Kai' Yokrattanakan, 56, is under investigation for lodging false complaints, and it has emerged she has travelled abroad on an illegal o

The Crime Suppression Division (CSD) is launching an investigation to find officials who helped "Ying Kai", a woman suspected of lodging false complaints against her former employees, obtain an official state passport.

Pol Col Chakrit said the CSD sent a letter to the Foreign Ministry's Department of Consular Affairs, asking who was responsible for issuing Ms Montha's official passport and which documents were submitted. Officials found to have been involved will be summoned by police, he said. 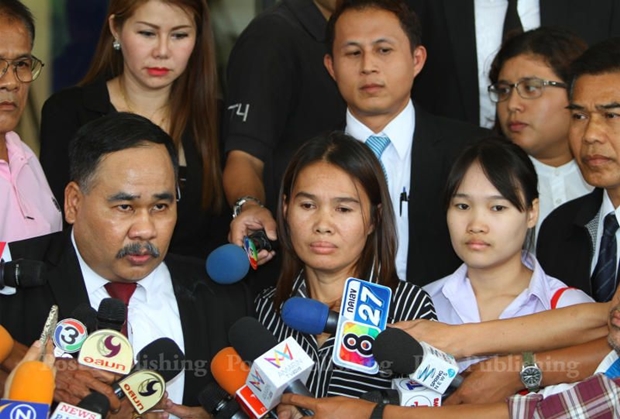 Lawyer Songkan Atchariyasap (left) is pictured on July 1 with Praphawan Jaikla, 19 (right) and her mother at the Crime Suppression Division on Bang Khen Road in Bangkok.

On June 21, Praphawan Jaikla, 19, and her parents, accompanied by lawyer Songkan Atchariyasap, chairman of the Network Against Acts that Destroy Kingdom, Religion and Monarchy, submitted a petition with the CSD against Ms Montha.

Ms Praphawan said that after she turned down a job Ms Montha offered in Hong Kong, Ms Montha filed a complaint with Pracha Chuen police, accusing her and her family of stealing valuables worth more than 10 million baht while they worked at Ms Montha's home in Chatuchak on March 18 last year. Ms Praphawan denied the allegation.

Other people who claimed to have experienced similar treatment also have lodged complaints with the CSD against Ms Montha.

Pol Col Chakrit said the Pracha Chuen police overseeing Ms Montha's cases against her former employees would testify with CSD authorities today, adding the CSD was in the process of questioning all victims and witnesses and gathering evidence.
The probe found that of the three Pracha Chuen police investigators overseeing Ms Montha's cases, two remained at the station while another had been transferred to Tha Kham station, a source said.

The official passport is for people travelling on official state business, and police believe Ms Montha must have got hers through an influential person.