Scott Bolton (L), NASA principal investigator for the Juno mission to Jupiter, reacts as the Juno spacecraft successfully enters Jupiter's orbit on July 4, 2016, at the Jet Propulsion Laboratory in Pasadena, California. Juno was launched from Cape Canaveral in Florida on August 5, 2011 on a five-year voyage to its mission to study the planet's formation, evolution and structure. / AFP PHOTO / POOL / Ringo Chiu

A $1.1 billion NASA spacecraft called Juno has reached the largest planet in the solar system and is now in orbit. It is also facing the sun again, so its solar power is back.

That means the spacecraft has finished re-orienting itself toward the Sun and is operating with solar power.

Where are the photos from the spacecraft? The cameras were switched off during the orbit insertion but Nasa promises great photos as it gets closer and closer to the planet.

AFP – NASA's unmanned Juno spacecraft on Monday began orbiting Jupiter, a key triumph for a $1.1 billion mission that aims to uncover the origins of the biggest planet in the solar system.

The room erupted in cheers as the solar observatory successfully entered its aimed-for orbit around Jupiter at 11:53 pm (0353 GMT Tuesday).

The spacecraft has traveled 1.7 billion miles (2.7 billion kilometers) since it launched five years ago from Cape Canaveral, Florida.

"We are in it," hollered Scott Bolton, NASA's principal investigator.

"You are the best team ever," he told his colleagues at mission control.

"You just did the hardest thing NASA has ever done."

Juno's inaugural lap around the solar system's most massive planet – the fifth from the sun – will last 53 days. Subsequent orbits will be shorter, about two weeks each.

The first mission designed to see beneath Jupiter's clouds, Juno is named after the Roman goddess who was the wife of Jupiter, the god of the sky in ancient mythology.

The spacecraft orbits Jupiter from pole to pole, sampling its charged particles and magnetic fields for the first time and revealing more about the auroras in ultraviolet light that can be seen around the planet's polar regions.

Juno should circle the planet 37 times before finally making a death plunge in 2018, to prevent the spacecraft from causing damage to any of Jupiter's icy moons, which NASA hopes to explore one day for signs of life. 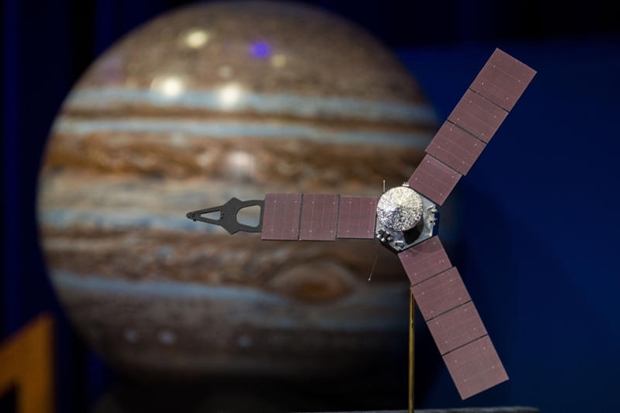 This NASA photo obtained July 4, 2016 shows a model of the Juno spacecraft at a news briefing, held before Juno enters orbit around Jupiter, on June 30, 2016 at the Jet Propulsion Laboratory (JPL) in Pasadena, CA. / AFP PHOTO / (NASA/Aubrey Gemignani)

NASA counts down to nail-biter orbit of Jupiter

AFP – A $1.1 billion NASA spacecraft called Juno must dodge debris and extreme radiation Tuesday as it attempts to orbit Jupiter, on a high-stakes mission to probe the origin of the solar system.

Juno is expected to arrive late Tuesday morning Bangkok time in the vicinity of the largest planet in our cosmic neighbourhood, five years after the unmanned solar-powered observatory launched from Cape Canaveral, Florida.

"We are barrelling down on Jupiter really quick," said Scott Bolton, Juno principal investigator from the Southwest Research Institute in San Antonio, Texas.

As NASA counted down to Juno's arrival, Bolton admitted to being "nervous" and "scared" about the fate of the spacecraft, which is traveling at a speed of more than 209,200 kilometers per hour toward what he called "the king of the solar system."

A key concern is that the spacecraft must survive radiation levels as high as one hundred million X-rays in the course of one year, explained Heidi Becker, senior engineer on radiation effects at NASA's Jet Propulsion Laboratory.

These high energy electrons, moving at the speed of light, "will go right through a spacecraft and strip the atoms apart inside your electronics and fry your brain if you don't do anything about it," she said.

"So we did a lot about it," she said, describing the half-inch thick layer of titanium that protects the electronics in a vault and brings the radiation dose down.

Still, she described the close approach as going "into the scariest part of the scariest place... part of Jupiter's radiation environment where nobody has ever been."

Juno must also avoid debris as it speeds through a belt of dust and meteorites surrounding Jupiter.

On approach, the engine doors are open, leaving the nozzle "vulnerable" to debris, he said.

"If any dust is in our way and hits that nozzle, it will knock a hole right through the coating that protects that nozzle and allows the engine to burn uninterrupted," he told reporters.

"That is one of the big gambles."

After that, a tricky, fully automated orbit maneuver must succeed – as the engines fires to slow it down enough to be captured by Jupiter's orbit.

Then, the spacecraft must re-orient itself toward the Sun in order to power the solar arrays.

If it fails to enter orbit, Juno may shoot past Jupiter, bringing a mission 15 years in the making to a swift end some 869 million kilometers from Earth.

Scientists hope to find out more about how much water Jupiter holds and the makeup of its core, in order to figure out how the planet – and others in the neighborhood including Earth – formed billions of years ago.