Although it is now the low season, world-renowned Maya Bay in Phi Phi Marine National Park is overcrowded with tourists and boats, posing a serious threat to the environment, marine biologist Thon Thamrongnawasawat has warned.

KRABI – Although it is now the low season, world-renowned Maya Bay in Phi Phi Marine National Park is overcrowded with tourists and boats, posing a serious threat to the environment, particularly coral, marine biologist Thon Thamrongnawasawat has warned.

Mr Thon, deputy dean of the fisheries faculty at Kasetsart University, said he was shocked during a recent visit to see the entire bay was jammed with both long-tailed and speed boat ferries as tourists from inside and outside the country, particularly China and Europe, crammed on to famous Ko Phi Phi Leh island.

The beach was densely crowded with tourists, with only standing space left, he said.

Mr Thon, who was on a visit to gather information on coral bleaching and the effects of tourism, said he was aghast at what he saw at the country's most famous marine park, even though it is now the low season for tourists.

"Those responsible for promoting tourism have done a very good job, but they should also think of the consequences that will follow," he said. 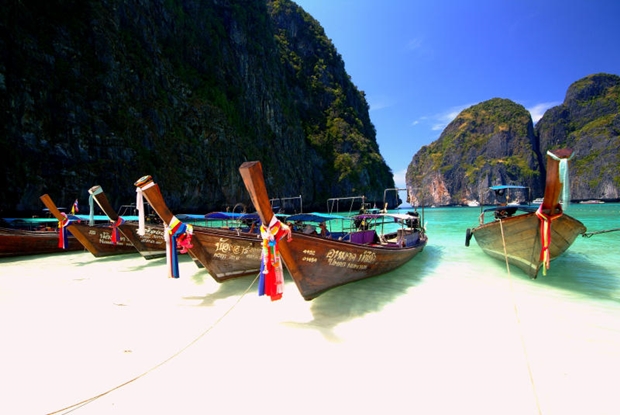 A 2014 photo from the Tourist Authority of Thailand gives tourists a very different impression.

"There are now too many tourists for the island to take.  Officials of the Phi Phi Islands Marine National Park accompanying me were also left speechless.

"They said that a few days earlier Maya Beach alone was visited by about 5,000 tourists each day and the park collected entry fees of 1.6 million baht from them.

"The revenue may be high, but I don't think it's worth what will happen to the island after the tourists are gone," said Mr Thon.

The renowned biologist and environmental champion said all boats leaving Phuket seemed to be heading for Ko Phi Phi Leh and Maya Bay. There was hardly any space left there for a boat to moor.

He said tourism at the marine park had not been properly managed.

From what he saw, it would be a difficult task to solve the problem of bleaching of the coral.

He did not blame the park officials as they had done what they could. The entire  Phi Phi Islands Marine National Park had only 18 officials, and 10 of them were assigned to oversee Maya Bay, he said.

As a result of over exploitation, nearly all of the coral in the area of Maya Bay had died, and the remainder  would probably die off soon with such a large number of tourists and tour boats, Mr Thon said.

He said there were now only 14 toilets on Maya Beach, which was certainly not enough for the 5,000 or more tourists a day.

More toilets were being built.  But, with limited space  available, the number was unlikely to exceed 20, he added.